This appalling story will make your blood boil with rage and your heart ache with sadness, followed by gratitude for those that work to defend the defenseless. I have said before and again reiterate that people who abuse helpless animals deserve and hopefully receive a non-stop express ticket to hell. I’ll put them on the train myself, if need be.

Richmond Animal Care and Control (RACC) this week announced the recovery of 56 animals that were abused and neglected beyond description and in such bad condition that they declined to detail some of the abuses the animals had suffered or publish pictures of their condition. 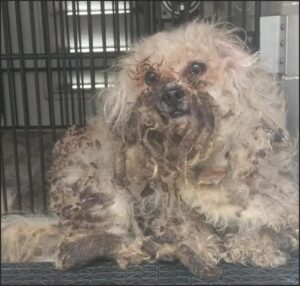 All told, RACC officers rescued 19 dogs, 33 cats, a rabbit, a turtle, a pot belly pig and a raccoon. Of all the animals, the only picture that they could release is this one:

The other pictures and conditions were too graphic for publication, according to RACC.

Ashley Hendricks at NBC 12 reported: “All of them needed immediate intervention, which we typically don’t see in such a large volume – we just kept finding more,” Christie Chipps-Peters, director at RACC.
It was unlike any rescue director Chipps-Peters had seen in the last 10 years she’s worked at the shelter. “And it’s just heartbreaking that animals are living in that environment and in that situation, and we are grateful as a staff to be able to help them,” she said.

The shelter is currently at capacity but they did what they could to make room and help nurse the rescued animals. Neighbors at an undisclosed address had taken notice of the animals and filed complaints that allowed RACC to take action last weekend. RACC has only said the property where the animals were located was in the 3rd Police Precinct and that the people involved will likely face felony animal cruelty and neglect charges.

When asked by Jake Burns from CBS6 if she had ever seen anything like this in her career, Peters replied, “No, no, this is by far the worst of sheer number, and I would say as far as the state of the home and the way the animals were kept, yes, by far the worst.”

The pets will be nursed back to health and then put up for adoption through other rescue shelters. “For the animals that specifically were taken in this case, they will not be available for adoption through our shelter,” Chipps-Peters said. “We just don’t want any of those pets ending up back with family or friends in that situation, so that’s the reason.”

Richmond is a dog town, but we love our cats and turtles and rabbits and pot belly pigs and raccoons, too. Pets often come to our rescue when we need them the most, and we should do the same when they need us the most — like now.
With the shelter at capacity and now the unexpected rescue of dozens of animals, RACC is urging those interested in adopting a pet to consider doing so soon.

Maybe now is a good time if you have been considering it. You can also help with a donation to the RACC Foundation that helps further their mission to rescue pets across the city and provide life-saving medical care, nurture them to health, and find forever homes. I have adopted three rescues — two dogs and a cat — thanks to RACC, and their people and operation could not be more welcoming or wonderful.  I am a true believer in their mission.

“For the 5% of the population that isn’t making correct decisions and not being nice to their animals, those are the people that we find and prosecute, and we feel good about that,” Chipps-Peters said. “We’re ending a cycle of violence or interventions with those pets. The far overarching, beautiful part of this is that for all of those people, there’s a million incredibly kind, helpful, supportive people that come out of the woodwork to love what we do and help make it better.”

Jon Baliles is a former Richmond city councilman. This column has been republished with permission from RVA 5X5.

This entry was posted in Crime , corrections and law enforcement and tagged Jon Baliles. Bookmark the permalink.