The fall 2022-23 enrollment numbers are in for Virginia’s institutions of higher education. Collectively, the state’s public colleges and universities held their own in a year in which enrollment continued to decline nationally. The community colleges staunched their bleeding after a couple of years of severe losses, keeping numbers stable, while the four-year institutions turned in a mixed performance.

All other public institutions lost enrollment, with the most devastating declines taking place at Radford University, down 14.7%, and the Virginia Military Institute, down 6.4%. Small liberal-arts institutions generally fared the worst while big research universities held up better.

There’s more to enrollment numbers than bragging rights. Higher enrollments translate directly into higher revenue. Institutions that lose students also lose revenues, even though their cost structure in terms of departments, programs, and physical plant remains the same. Persistent erosion of enrollment can threaten a university’s financial integrity, as has been seen in innumerable private non-profit institutions across the country that have closed their doors.

The following table shows enrollment broken down by institution, ranked by the percentage gain or loss in the total number of students, including undergraduates, graduate students and “first professionals” such as law school and medical school students. These numbers, published by the State Council of Higher Education for Virginia (SCHEV), may be refined, but they are not likely to change substantially. 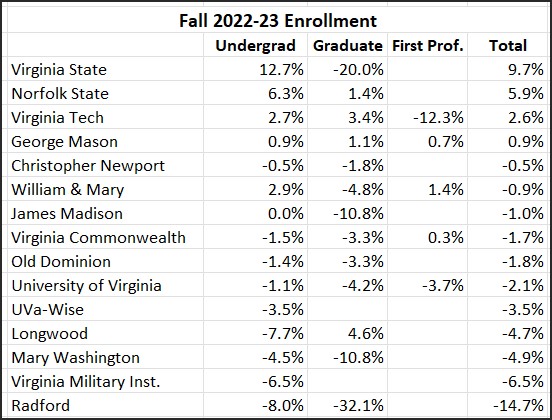 While the higher-ed industry nationally is fighting a decline in the number of college-bound students, some institutions are bucking the trend. Each institution has a unique story to tell.

Virginia State is rebounding after experiencing serious financial issues and a previous decline in enrollment.

Virginia State and Norfolk State may be benefiting from an increased interest by African-American students in HCBUs where, in an era of angst over race relations in predominantly White universities, they may enjoy a greater sense of belonging.

Virginia Tech’s numbers may reflect the aggressive expansion of its Northern Virginia campuses.

VMI, as we have documented on this blog, has experienced a massive wave of negative publicity surrounding allegations of racism and sexism, as well as ongoing conflict between the administration and a large portion of the alumni base over the implementation of Diversity, Equity and Inclusion.

Longwood, Mary Washington, Radford, and UVa-Wise are predominantly liberal arts institutions competing for enrollment at a time when more students are seeking to major in disciplines such as business, health, and STEM, which offer superior job prospects upon graduation.

So, how do colleges and universities deal with the enrollment challenge? The admissions process is tricky. The first step is to encourage as many applications as possible from the targeted student demographic. Thanks to the Common College Application process, which makes it easier than ever for college-bound students to apply, the most prestigious institutions have been getting more applications than ever. But some colleges and universities have resorted to dipping deeper into the applicant pool — accepting lower SAT scores and lower high-school grade point averages — in order to maintain their numbers and meet diversity goals.

The challenge is figuring out how many applicants to whom to offer admissions without knowing what percentage will accept. The percentage of students accepting admissions offers is known as “yield.” While students are applying to more colleges, they can attend only one, therefore yields are falling.

Last year Virginia Tech had the experience of admitting more than the number of students it wanted after a higher percentage than expected accepted. That created a problem on the Blacksburg campus of where to house them all. Conversely, if a university offers too few admissions, it can lose revenue for tuition, fees, campus housing, and food services.

Because the admissions process is as much an art as a science, enrollment numbers can blip up and down from year to year. It is important not to read too much into a single year’s change. Boards of Visitors should be looking at five-year (or longer) trends. Are applications up or down? Has the institution resorted to lowering admissions standards in order to maintain its numbers? Is the yield — the rate at which students accept an invitation — up or down?

As SCHEV updates its admissions data and I have more time, I will follow up with more detailed analysis.

Update: Minutes after I posted this article, SCHEV released its own analysis of enrollment trends. SCHEV looks at the data differently than I have in this post, so the tables are worth reproducing. 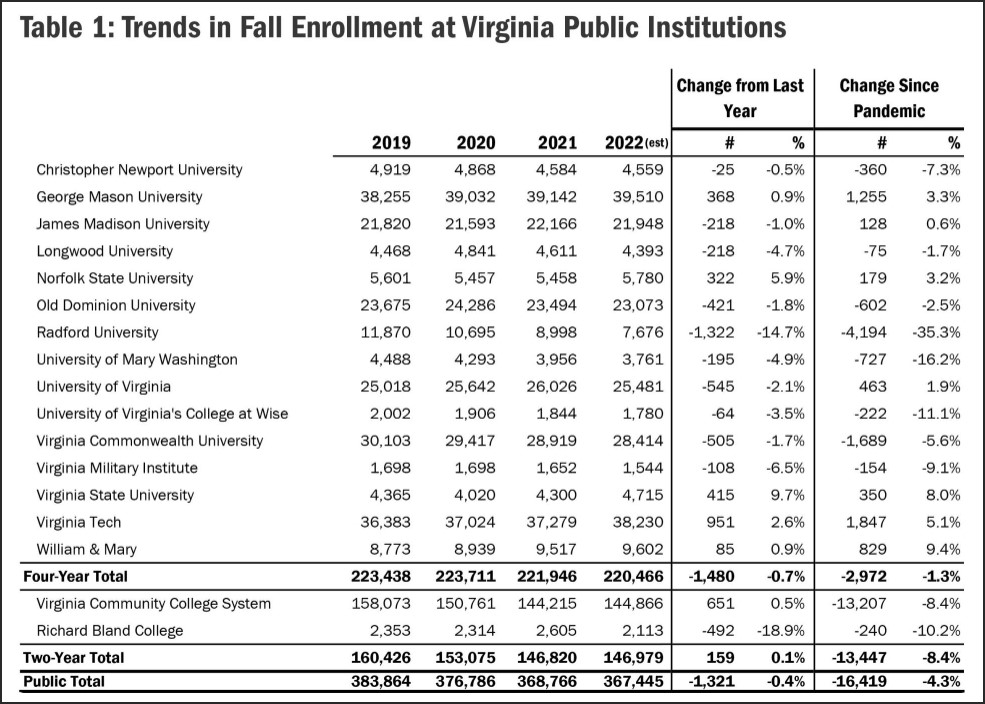 Second, SCHEV breaks out the “first time in college students,” which is a better indication of where things are heading than the total enrollment numbers that I reproduced. Total enrollment of first-time-in-college students surged 5.2% for Virginia’s public four-year institutions, most notably for Virginia State, the University of Virginia, Norfolk State, and Christopher Newport. That’s a very different story — and a more meaningful one — than my analysis above. 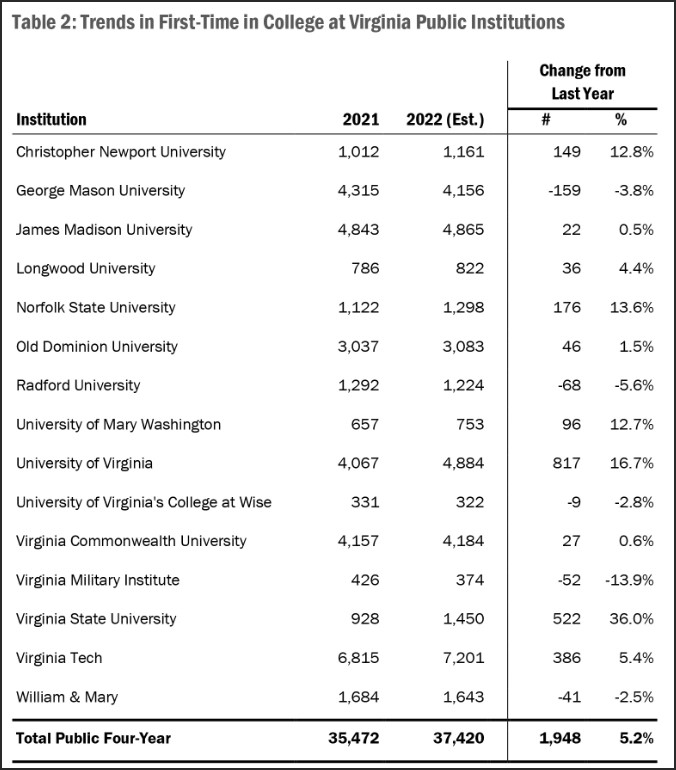