Back to Taxaginia: Add A New Wealth Tax

Only $1.7 of $4.6 billion was diverted back to taxpayers by 2019 law.  Final row includes $420 million for one-time tax rebates paid later this year.  It was the addition of the Pease Limitation raising taxes on high incomes which reduced the final tax relief total. Sources: Chainbridge Solutions August 2018 report on revenue projections. Department of Taxation on tax reduction estimates. Click to open.

The 2019 General Assembly is a dust storm in the rear-view mirror, but the four state tax increases that were discussed in “Taxaginia” last November are still in the road ahead.   This post revises and extends my reporting on their status in this morning’s Richmond Times-Dispatch, featured on the Commentary section front.

In a piece in June 2018  I saw signs the state would keep the state income tax revenue harvest produced by conformity with the federal Tax Cuts and Jobs Act.  Turns out that prediction was 60 percent correct, with my calculations showing less than 40 percent of the expected revenue was diverted by tax policy changes.

Almost 25 percent of that is a one-time rebate to be mailed in time for the taxpayers’ positive vibes to last until the November election.  For individual taxpayers taking the state’s standard deduction, the only lasting tax relief is a whopping $172.50 annually for a couple filing jointly.  And they won’t get that on this year’s returns, but only on the tax returns they file in 2020 and beyond.

Start with the revenue projection produced for the state last summer by a consultant and subtract the tax policy impacts reported in the Department of Taxation analysis on the House bill, the Senate bill and the final bill.  That produces the chart above.  The chart below from that analysis breaks the tax changes down a bit. 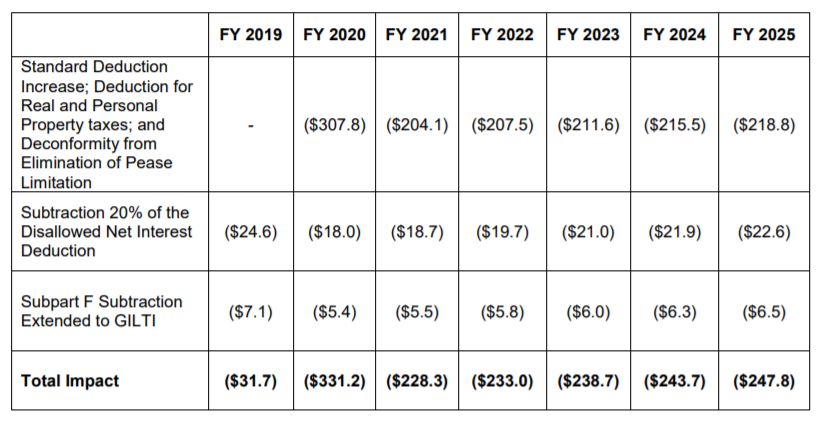 Revenue reductions from the final signed version of SB 1372.  The individual tax impacts are on the top row, with rows two and three being business provisions. This does not include the $420 million in rebates to be paid this year.  Source: TAX

Just before the end of the General Assembly session I checked with Secretary of Finance Aubrey Layne to see if last summer’s revenue estimates from Chainbridge Solutions were still the state’s best projection.  He said yes, so that’s the only baseline we can work with.   To have less than a third of that translate into tax reform  – even less for middle class families –  is a disappointing outcome.

That wealth tax provision, a new state-only version of the Pease Limitation,  is not as dramatic as increasing the tax rate on the wealthy, the proposal causing debate at the national level.  The result is the same, a higher effective tax rate on higher incomes.  It produces close to a half a billion-dollar tax increase over that six-year period I’m using.  Long term tax relief of $2.2 billion shrank to $1.7 billion.

Before the Assembly acted, the Pease Limitation was going away at the federal and state level, repealed by TCJA.  Putting it back for state taxpayers starting this year was a tax increase, the only element of the bill which directly increased taxes on somebody.  It doesn’t cap all deductions, but one category it does cap is charitable giving.  Since the cap is gone at the federal level, however, Virginia taxpayers may not change behavior.

I doubt more than a dozens of people in either chamber really understood it, but Secretary Layne and Fairfax Delegate Vivian Watts did.   If the House majority flips in November, Watts may be chairing the House Finance Committee in 2020 and it might get very interesting.

Oh, sure, the tax legislation and the state budget include language setting up a Taxpayer Relief Fund, intended to hold any additional “conformity” revenue not diverted by the rebates or the tax policy changes made this year.  The money is earmarked for future tax reform. Both political parties will campaign on what they promise to do for some of you with that money.  More good things could happen.  But nothing prevented a more aggressive tax policy response this year.

Briefly addressing the rest of the “Taxaginia” package, the headline there is the language the Republicans inserted into the budget dealing with future revenue from the Regional Greenhouse Gas Initiative, an amount still to be determined.  When Governor Terry McAuliffe started the process to join RGGI, he said the carbon tax dollars would flow back to ratepayers, preventing electricity price increases.

But instead of cementing that promise with a bill or language directing the State Corporation Commission to follow that path, the General Assembly grabbed the dollars for the state’s general fund.  Again, that’s a positive step creating a new tax increase.  Your electric bill will go up (again) and the legislators will spend the boodle (again.)  Watch for some action on this at the veto session, however.

The tax hike already in place is the new set of medical provider assessments imposed on hospitals to fund the state match for Medicaid expansion and higher Medicaid provider payments.  The amount of money involved is finally becoming clear.  It estimated at $994 million in the current biennium, with the total for 2021 projected at $862 million for one year.  You haven’t seen those totals before now.

And finally, the fourth tax increase previously mentioned and the one with the strongest policy rationale is widening the sales tax net on remote sellers.  As everyone expected, the General Assembly made the necessary changes in state law for compel more remote sellers to register, collect the state tax and remit it.  We all owed tax on those transactions, whether we paid it or not, so arguably that wasn’t a tax increase.  It will feel like one, though, and have the same economic impact.