Assembly Protected Utilities, Not Other Businesses 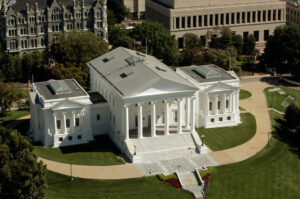 First published this morning (with some slight differences) by the Thomas Jefferson Institute for Public Policy.

Now that the Virginia General Assembly’s “Cops and COVID” special session is all but finished, will it be easier or harder for the state’s struggling economy to recover in 2021? It will be harder, probably, except for the utilities.

The initial reason Governor Ralph Northam recalled legislators starting August 18 was to review the state budget for COVID recession-related changes. Then a series of confrontations between police and Black Americans added law enforcement and criminal punishment to the agenda.

But the legislators reached far beyond those issues in the 270 pieces of legislation introduced, of which 56 have now passed (many of them duplicates).  The Assembly recessed October 16, but did not adjourn, and that will delay the effective date of the various new laws until perhaps March 1.

What did the legislature do for or to the business climate in Virginia?

It made it much more likely that a local or state inspector will impose a cash fine on any business deemed to be in violation of Northam’s various executive orders related to the pandemic. Previously only a criminal penalty could be imposed, very unlikely for most violations. House Bill 5093 will allow that $500 civil penalty instead, which may become quite common.

If some customer thinks you have unfairly raised prices on some scarce product or service (and the shortages we went through in March may repeat), House Bill 5047 adds far more authority for the state to investigate and punish you. The so-called anti-gouging statute will now apply to manufacturers and distributors, not just retailers.

If you are a residential landlord, both approved bills and a provision in the new budget will protect your non-paying tenants from eviction, and dictate the terms of re-payment you must accept. The restrictions are in place until the official emergency ends, probably well into 2021. Only dwelling units are covered, so any commercial lease is still enforceable by eviction or other legal means.

If you are a creditor of a different kind, any funds which the debtor has received in the form of government COVID-19 relief may not be sought to cover the debt. House Bill 5068 was one of the few to pass with an emergency clause, so it will go into effect as soon as Northam signs it. It may not mean much unless another round of stimulus payments is made.

Another aspect of the debt crisis spawned by the pandemic and layoffs involves customers not paying their electricity, natural gas, water, and sewer bills. That moratorium on disconnections is also extended by language in the budget, and the State Corporation Commission is directed to raise future bills for everybody to make the utilities whole. The legislature did commit $100 million from federal COVID funds toward paying down the bad debts, but it won’t be enough.

As with the rental provisions, only residential customers are protected. No business struggling to pay utility bills is offered protection or relief or extended payments. But if there are also utility bad debts from businesses, they will be among those collected by raising rates on remaining customers.

The utilities are the only private businesses the General Assembly acted to protect from bad debts during the recession.

There is a special provision for the state’s largest electricity provider, Dominion Energy Virginia. It will fully forgive the unpaid bills of certain residential customers as of August 31, restarting the clock for them. The estimated $78 million that will cost will be recovered next year, in the scheduled utility rate case, by reducing any customer credits due because of excess profits over four years.

Those excess profits were, of course, extracted from both residential and business customers of the utility, and any rebates would have gone to both, as well. Business ratepayers will also be told to pay extra on their bills to repay the utilities their pandemic bad debts next year. Like residential customers, they face higher utility bills as they seek to rebuild next year.

Certain medical facilities received some protection from lawsuits. Nothing else that passed the General Assembly and was sent to the Governor made things easier for businesses or employers. Several such bills were introduced – efforts to limit COVID legal liability for most businesses, to limit taxes on COVID financial assistance received by businesses, and to provide a tax break for landlords who allowed tenants to skip rent. All those failed, usually without a hearing.

It was almost worse. Several other proposals which would add huge costs to doing business in Virginia during the pandemic were defeated, but only by a handful of votes. Advocates for both will be back in January pushing hard for them during the 2021 regular session.

Most of the Assembly’s Democrats were ready to create a presumption that COVID-19 is caught at work, and that employers are thus responsible for health care, leave pay and even disability through the Workers Compensation system. The bill passed in the House but failed in a Senate committee, mainly because of the expected cost to the government for its own workers.

That was also the fate of legislation mandating paid leave for employees who were dealing with COVID, either their own disease or someone they care for. That was also a Democratic priority, especially within the House. In that case, there is a current federal mandate that businesses could point to, arguing they didn’t need a second and different set of rules. Expect another full court press in January.

The attitude of many legislators toward Virginia’s employers was an extension of that demonstrated during the 2020 regular session, before the pandemic. At that gathering new employer mandates and employee grievance options proliferated, many subject to state investigations or punished by civil lawsuits. The balance in Richmond has shifted against businesses and employers, except for a favored few.

This entry was posted in Budgets, Business and Economy, Energy, Regulation, Unemployment and tagged Stephen D. Haner. Bookmark the permalink.