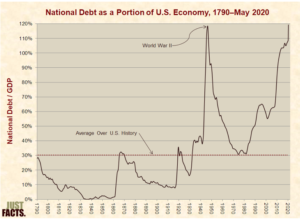 Steve Haner’s superb column on the state budget turned attention to federal aid to state and local governments. It is worthwhile to review where the feds get that money.

“The US national debt has just reached 120.5 percent of the nation’s annual economic output, breaking a record set in 1946 for the highest debt level in the history of the United States. The previous extreme of 118.4 percent stemmed from World War II, the deadliest and most widespread conflict in world history.”

The Fed’s dual mandate from Congress is to maximize employment and stabilize prices. The Fed floods the economy with money in times like this and is supposed to sop it up with higher rates when the economy appears to overheat and prices rise too fast.

By the end of the year, the Fed is projected to have purchased $3.5 trillion in government securities with newly created dollars and lent over $2 trillion to businesses and state and local governments. Until there is another stimulus bill.

The Fed’s bond purchases create money to finance the massive debt run up by the political branches.

Many of the “loans” in the COVID recession are designed to be forgiven, and others will be forgiven as a political expedient.  More money is created.

Keynesian economic theory promoted government intervention in markets during downturns. It posited that the debt incurred would to be paid back by taxes and growth.

“Modern Monetary Theory,” in contrast, argues that the government can always pay its bills by creating more money. It is said to mean that deficits and debt are relatively meaningless.

It represents the creation of an economic theory to support what the left wants to do politically. It says that creating money is a tool that can be used without consequence to fund anything considered politically desirable. Under MMT there is really no need to collect taxes at all except to punish the successful.

We may be about to test that fantastical theory. There will be no place to hide if we do.

A useful read is by Anthony Dories and James Harrighan. They state:

“The federal government is moving into the final stages of its fiscal life. Deficits have gotten so enormous that the Federal Reserve simply prints the money the government needs. Why? Because that’s the only option left on the table.”

They also contend that the only thing holding back massive inflation is that while the Fed massively increased bank reserves, the low rates they get for lending and the interest they are paid by the Fed on their reserves are preventing the increase in reserves from translating to a massive increase in the money supply.

The increases in the money supply that we have seen have been reflected in the prices of financial assets, not goods and services. Thus the big fall in stock markets due to COVID shutdowns was followed by rapid recovery based on Fed intervention. The NASDAQ is now at an all time high.

One day soon we will find out if the Fed has the will to try to stop inflation with higher rates that Treasury as well as private borrowers will have to pay.

If they do it will drive the percentage of government income used to service debt so high that political branches likely will borrow even more in order to continue to spend and stave off social unrest and political defeat.

It will also incentivize the banks to lend their reserves at the new higher rates.

After WW II the United States reduced debt-to-GDP (chart above) with growth.

The iron-fisted government control of the economy advocated by the “progressive” left has never produced economic growth anywhere. The Chinese Communist Party under the leadership of Deng Xiaoping who succeeded Chairman Mao created economic growth by embracing economic capitalism and enough personal freedom to let it work while maintaining political control.

The seemingly endless need to control personal freedoms that accelerated with Xi Jinping’s Presidency since 14 March 2013 is snuffing out the economic growth of that country as well.

Who stands on the side of rational economic policy?

The Congress is not a place to look for restraint in printing money.

President Trump has proven himself to be an easy money guy. Most developers are.

Joe Biden needs to take a stand on his economic policies. The omens are not good. His economic “task force” includes Stephanie Kelton, a former adviser to Sen. Bernie Sanders (I-VT), who is an advocate of the Modern Monetary Theory.

So the Federal Reserve and the Supreme Court seem to stand between the United States and economic ruin. We can pray they both have the will to do it.

But then, the left will want to “pack” them both.

This entry was posted in Budgets, Federal and tagged Boomergeddon, James Sherlock. Bookmark the permalink.