A Thumb On The Scale for ACP? 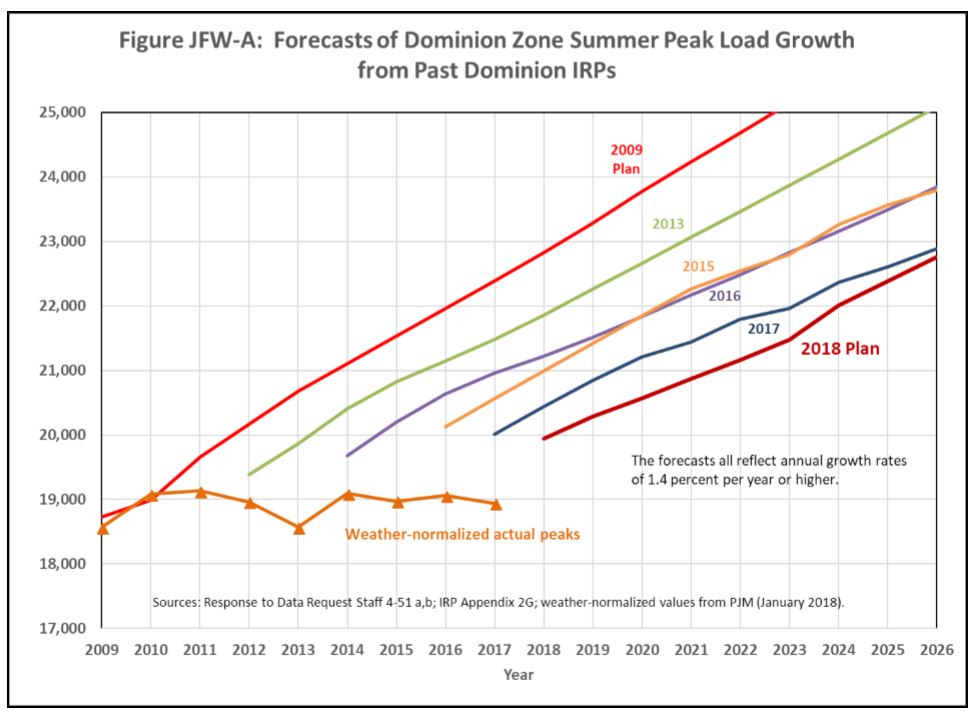 A witness to whom Dominion Energy Virginia had vehemently objected, Gregory Lander of a company called Skipping Stone, had his time on the stand anyway at the State Corporation Commission Tuesday. His testimony might still be stricken, but the two commissioners and everybody else in the room heard it and then a lengthy cross-examination underlined it.

If he is correct the entire integrated resource plan filed by the giant utility, a process ordered by the General Assembly to plan the utility’s future, had a fundamental flaw. One single input in a model had a ripple effect in its choices for future generation, some of which it hopes to support with the controversial Atlantic Coast Pipeline.

The three-day hearing on the integrated resource plan, which will stand for two years, opened with SCC Chairman Mark Christie deferring a ruling on the motion to exclude some of Lander’s testimony. He said the decision on the ruling would be announced with the full decision.

Christie also repeated what has become a standard SCC disclaimer on IRP cases. It is just a planning document, any future plants will need a full commission review, “and just because you admit evidence does not mean it’s a finding of fact.”  He also added that before the ratepayers are billed for gas from the ACP the cost will need to be judged reasonable and prudent in its own case.

A little background: Dominion uses a modeling system called Plexos that uses information such as the expected new demand, generating units which might need to retire, various types of generation and their costs and environmental expectations to design its future system. As engineers say, and it was said again this week at the SCC, all models are wrong but some of them are useful.

The five future generation configurations included in the integrated resource plan used the model with different inputs, many of the variations dealing with future carbon regulation. According to Lander, and this was apparently confirmed in interrogatories, the cost of transporting natural gas through the ACP to Dominion generators was simply left out. SCC staff witnesses pointed to the same omission.

The commodity cost for gas was plugged in, but the cost of getting that gas to the plant was not. This omission made the choice of natural gas more cost-competitive and perhaps skewed the model in favor of gas. It put a huge thumb on the scale.

It is the transportation charge for the gas which will include the cost recovery, plus profit, for the construction of the project. Lander claims that will add up to $3 billion to ratepayer costs over 20 years. Opponents claim gas from the ACP will be more expensive than from existing pipelines. Lander was an expert witness hired by Appalachian Voices, an anti-pipeline group.

The IRP cannot be found reasonable and prudent, Lander told the judges, if an important cost like fuel logistics is set at zero. “The model is making choices that are not reflective of total costs.” He said that instead of building new gas combustion turbine units, included in the plan to complement all the intermittent solar also planned, the company should just keep some of the other fossil fuel units it plans to retire early and run them less often.

Lander was also an entertaining witness, taking it upon himself to respond to a formal objection made by Dominion attorney before either judge could chime in, and peppering the lawyer with his own questions. “You don’t get to ask the questions,” chided Judge Judy Jagdmann. Dominion pushed back hard on the idea that an environmental witness would be suggesting they keep an oil plant in operation. He responded that is also makes no sense to strand a viable asset and using it buys time “to let renewables catch up.”

These hearings are slow, dry and technical, filled with acronyms and often a mystery to people outside of the business. The various parties have different goals and agree sometimes, disagree sometimes, and poke each other on cross examination. As of late this afternoon, day three, it was still underway.

Unnoted ironies abound, as when an environmental witness argued that the SCC staff is under-estimating solar capacity factors going forward because this has been a wet year. Uh, isn’t a central claim of climate change alarmists that this is the new normal? In pre-filed documents Dominion dismissed wind turbines as difficult to build in mountainous terrain, the same terrain where it is building hundreds of miles of pipeline.

One point of unanimity: Everybody ganged up on Dominion over its forecasted healthy growth in demand for the next 15 years.

Several witnesses noted that Dominion’s load forecasts have been wrong for years, and if demand is truly flat and will remain flat, Dominion may not need to build any new generation for a while. “Load growth drives generation planning” said William Cleveland of the Southern Environmental Law Center. 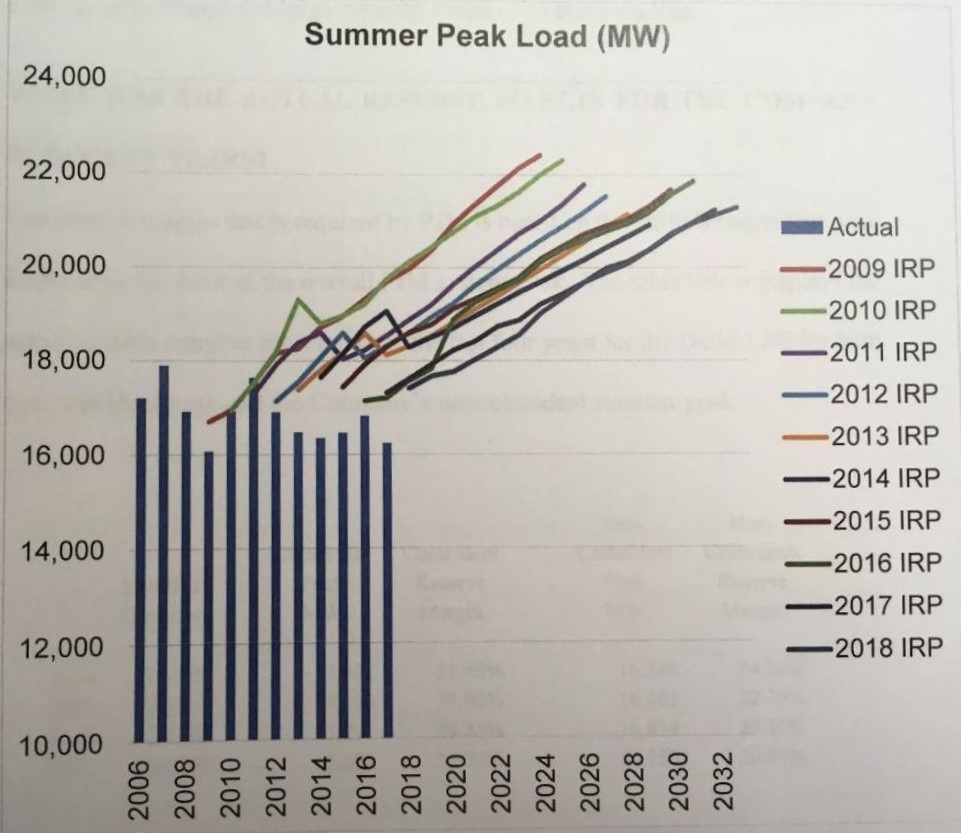 Dominion actual summer peaks (not weather normalized) and previous and current projections (rising lines).  Actual still doesn’t match projections, although they did have a higher 2018 peak missing from the chart.  Source: SCC

The two charts illustrating this article show Dominion’s actual summer peaks compared to its current and former forecasts, one a weather-normalized load forecast for Dominion. The point of taking out weather as a factor is you can see if something else is producing growth, such as a stronger economy or major changes in population. To the extent those are identified, usage is often trending down and more energy efficient machines and appliances proliferate.

These are key questions when the General Assembly was persuaded to set a goal of 5,000 MW of new renewable generation, which may force the early retirement of viable existing plants that ratepayers still have to pay for in full. It also is key when thinking about possible extensions to the operating licenses of Dominion’s four nuclear reactors. A Dominion executive testified they are keeping the estimated price of those extensions secret because they don’t want to influence future bidders.

Anybody in the nuclear business has a damn good idea what it will all cost, and Bacon’s Rebellion contributor Tom Hadwin noted a media report setting it at $4 billion. One billion per reactor sounds very optimistic. Dominion has a better estimate but just refuses to tell its ratepayers.  The SCC and all the attorneys who have signed the non-disclosure agreement know it.

This entry was posted in Energy, Environment and tagged Dominion, Stephen D. Haner. Bookmark the permalink.