A Closer Look at the 2018 Hate Crime Data 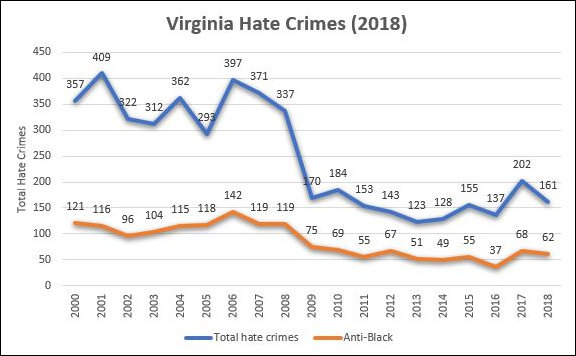 The Virginia State Police have published their Crime in Virginia update for 2018, and it is worth noting what Attorney General Mark R. Herring is focusing on in a press release issued today — the fact that marijuana arrests increased 3.5% last year, more than tripling since 1999. No mention of hate crimes.

Not only were there fewer hate crimes reported in Virginia last year, most of them were minor in nature. None were homicides, only one was arson, and only seven were classified as aggravated assault. Given how elected officials and the media have magnified the issue of race and ethnicity in the public discourse today, the fact that race- and ethnic-based hate crimes declined in the Old Dominion last year suggests that the public attitudes and behaviors are not nearly as polarized as those of the political class.

Given the data, it is difficult to maintain a state of hysteria and alarm over a looming white supremacist threat here in Virginia. It may be a winning issue among Democratic Party activists, but it won’t resonate with the broader public. Herring is prudent to drop the issue.

Empirically, Herring stands on firmer ground when he talks about the continued rise in marijuana arrests from fewer than 10,000 in 1999 to nearly 30,000 last year. And he stands on firmer ground in making marijuana arrests a racial issue.  Despite comprising 20% of the population, African Americans accounted for 46% of all first-offense possession arrests between 2007 and 2016.

That doesn’t mean I necessarily agree with the inferences Herring draws from those numbers, just that he doesn’t appear to be torturing the data. Still, the first rule of journalism is to never trust a politician. Elected officials routinely cherry pick data to score rhetorical points. Time permitting, I will check to see if his assertions withstand scrutiny.

This entry was posted in Crime , corrections and law enforcement and tagged James A. Bacon, marijuana. Bookmark the permalink.