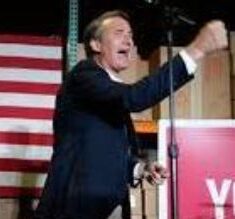 Republican gubernatorial nominee Glenn Youngkin is proposing to reduce Virginians’ taxes in much the same way Governor Ralph Northam raised them: Use several individual proposals, some not all that large, which accumulate into a significant change.

As Northam ends his term, his attitude seems to be, what tax increases? He claims the current $2.6 billion general fund surplus and the almost $400 million transportation fund surplus are due to economic growth.

No. Tax increases greatly contributed to those surpluses and will keep the commonwealth’s coffers overflowing. Youngkin’s proposal tracks those tax hikes and softens their individual blows.

For example, a change in sales tax collections, imposing the tax on more out-of-state shippers just as online retail exploded, contributed to both surpluses. Youngkin proposes to counter that by removing the sales tax on groceries.

Exempting food purchases from the sales tax has been a longtime goal of some in both political parties, especially former Democratic Gov. Douglas Wilder. Northam had also promised it.

After the 2017 federal Tax Cuts and Jobs Act pushed the federal standard deduction to $25,000, millions of Virginians gave up taking state itemized deductions in order to enjoy that higher federal deduction. That one change produced the largest piece of the bonanza of additional state revenue that politicians are now plotting to spend in January.

So Youngkin proposes to increase the state standard deduction to $9,000 for an individual and $18,000 for a married couple. That will take hundreds of thousands of taxpayers entirely off the income tax rolls and provide a significant reduction for the millions who use the standard deduction: $518 per year for married filers.

It is something the Thomas Jefferson Institute recommended three years ago, and legislators in both parties have previously proposed higher standard deductions. Over the long term, this is by far the largest of the tax cuts proposed by Youngkin and the best one for the economy.

The surplus in transportation accounts was created by 2020 legislation which raised the gasoline tax by 17.6 cents per gallon in some parts of Virginia; 10 cents per gallon in others; and then created a new highway user fee imposed on vehicle registrations.

Youngkin’s proposal for a one-year suspension of the most recent 5-cent gas tax increase won’t save taxpayers much, but it does remind Virginians about the major 2020 tax increase under Northam, which was little noticed as gasoline prices fluctuated.

More surplus revenue came from the unfortunate decision this year to impose income taxes on the federal Paycheck Protection Program and state Rebuild Virginia grants. Under pressure from the Thomas Jefferson Institute and others, the General Assembly exempted the first $100,000 in grants from income taxes. Youngkin proposes to exempt it all.

His list of proposals includes a $40,000 exclusion for military retiree pay. Also one-time individual rebates of $300 per person or $600 per couple, larger than the 2019 rebates of $110 each that Northam and the legislature agreed to in pretending to return that year’s surplus back to the people.

The other truly major tax idea is related to the wave of inflation which is following the massive federal COVID relief spending. Real estate values are already exploding all across Virginia.

Higher house values produce higher real estate taxes unless local governments lower their tax rates. To capture the inflation-driven tax increase now, it takes a simple vote by the governing body. Youngkin would add the requirement for a voter referendum in those instances.

The complaints about that from local officials in both parties will be quick and loud, and this idea might produce the largest legislative battle next year. Former Republican Gov. Jim Gilmore also sought to rein-in a local tax, the car tax, but had only mixed success. People still pay a portion of that tax.

Most voters who remember that battle 20 years ago blame the General Assembly for the tax surviving, not the former governor. They may appreciate the next governor making a similar push on another out-of-control local tax.

Stephen D. Haner is a senior fellow for state and local tax policy at the Thomas Jefferson Institute for Public Policy. This column, which appeared first in the Free Lance-Star, is republished with his permission.

This entry was posted in Elections, Taxes and tagged Stephen D. Haner. Bookmark the permalink.