A scene from King Family Vineyards near the polo grounds

Albemarle County has some of the most beautiful man-made landscapes in Virginia. As the southern anchor of the so-called “northern Piedmont,” Albemarle is set amidst the rolling hills of horse and wine country. Rich people from around the United States, and even a few from Europe, pump phenomenal sums into the farms surrounding Charlottesville. The homes of this landed gentry are tasteful in the elegant, understated Virginia tradition. The trees are well pruned and the flower gardens lush. Barns are well maintained, fields carefully tended, and fences painted and in good repair.

My wife and I have just returned from this part of the state after a few days of wining, dining and hiking. Though appreciative of the beauty, I am profoundly ambivalent. (For the record, I do not speak for my wife!) The fabulously wealthy people who created this amazing place live side by side with a population so far left on the political spectrum that even locals jokingly refer to the region as the People’s Republic of Charlottesville and Albemarle County.

How is it, I wonder, that Charlottesville multimillionaires like Michael Bills, founder of the environmentally leftist Clean Virginia, and his wife Sonjia Smith, underwriter of all manner of “progressive” political candidates, co-exist with the likes of Charlottesville Mayor Nikuyah Walker, whose poetry proclaimed, “Charlottesville rapes you and leaves you in sullied sheets,” and the Albemarle County school board, which is integrating concepts from Critical Race Theory into its teacher training? In this age of George Floyd and Black Lives Matter, how do uber-privileged white people like Mills and Smith escape criticism from the left?

Albemarle County is home to the Roseland Polo Club at the King Family Vineyards near Crozet as well as Virginia Polo located five miles north of Charlottesville. In May the region hosted the National Interscholastic Championship. Polo is the preserve of the landed gentry, right up there with fox hunting. As a player, you can’t bring just one horse to a polo match. Your mount will tire quickly. You need five or six horses. This is not a sport for the hoi poloi. It is not a sport that kids from the ‘hood can aspire to.

I don’t know any polo players, so I can only speculate about their political inclinations. I would hazard the guess that not many are Trump sympathizers. The former president is too garish, too loud, too rude, too boorish. In Charlottesville only 13% of voters cast ballots for Trump in the 2019 election. In Albemarle only 32% did — roughly commensurate with the percentage of the white working-class population.

As it happens Albemarle’s landed gentry is highly privileged — not in the Critical Race Theory sense of being white, or even the classical Marxist sense of being wealthy, but in its exemption from taxes that afflict the menial classes. A remarkably high percentage of the land in the county has been granted conservation easements, meaning that the owners gained tax credits and exemptions from real estate taxes in exchange for forfeiting any rights to develop their property (something they never wanted to do in the first place). As classical Marxist theory would predict, the landed gentry has articulated principles and values that are supportive of its material self interest. 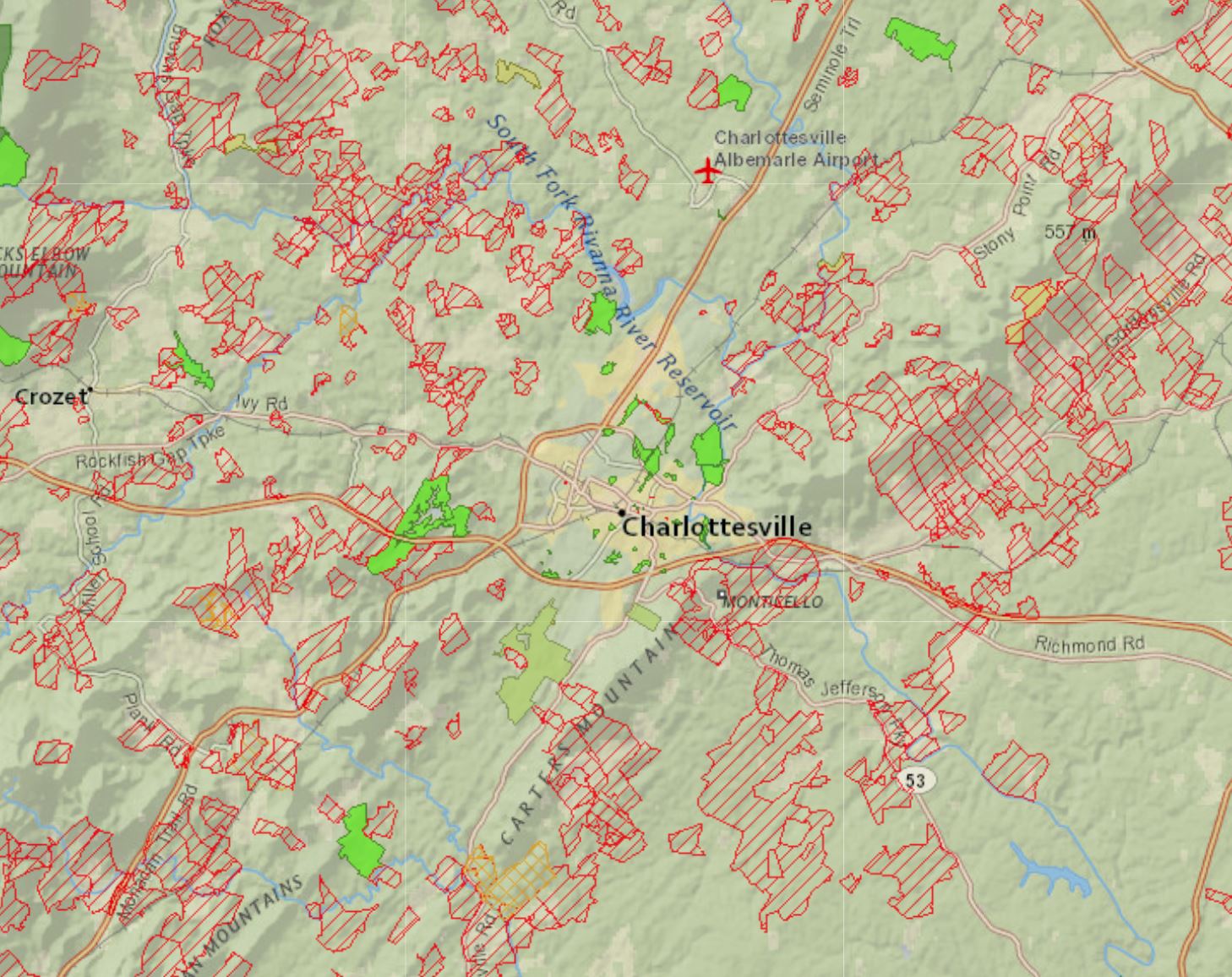 Conservation easements in the Charlottesville area. Source: Virginia Department of Conservation and Recreation

In a past era, the village Marxists inhabiting the UVa anthropology department or waiting tables and serving organic, locally sourced food would have railed about the class divide in Albemarle and Charlottesville. You hear a lot of talk about “privilege” these days, but it’s not class privilege. In the updated argot of cultural Marxism, it’s racial privilege.

If you made a million dollars a year and lived in a university-maintained mansion like UVa President Jim Ryan does, or stabled your polo ponies in a tax-privileged horse farm, or ran a hedge fund from your mountaintop manse overlooking bucolic, tax-advantaged hayfields, how would you deflect the wrath of the little people? You might dwell upon the misdeeds of slaveholders and segregationists of a hundred years ago. You would make every contemporary issue a racial issue, and you would signal your virtue by proclaiming your solidarity with marginalized and oppressed people of color. You would re-cast every environmental cause you’ve been championing for the past 20 years in terms of “environmental justice.” It goes without saying that you would look down your nose at vulgar petit bourgeoisie Trump voters.

You would rest secure in the knowledge that no one was giving the least thought to your real source of “privilege,” the tax exemptions on your beautiful, manicured landed estates.

That’s how I imagine things to be. Whether that’s a fair and accurate portrayal of horse-and-wine country, I cannot say. But the coexistence of immense wealth and radical politics cries out for explanation.