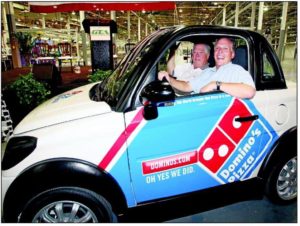 Seems like yesterday.  In late 2012 Terry McAuliffe was the only Democrat running for Virginia governor in the upcoming 2013 election.  One of his central campaign themes was that he was an entrepreneur who would bring jobs to Virginia.  He was also an investor and recently resigned Chairman of a venture called GreenTech, a would be manufacturing company that hoped to make energy efficient electric cars in the United States.  Prior to announcing his second campaign for governor Terry had been out trolling for government subsidies in return for bringing GreenTech’s manufacturing plant to some lucky American community.  During McAuliffe’s tenure as chairman, GreenTech had announced that it would locate in Tunica, Mississippi rather than Virginia.  Candidate McAuliffe was asked why he didn’t bring GreenTech to Virginia at a Dec 5, 2012 press conference.  He claimed that Virginia “decided not to bid” on the automobile plant.  The truth was more complicated resulting in a Politifact article citing McAuliffe’s claim as “false”.  It seemed that Virginia lost out on at least 1,500 GreenTech manufacturing jobs.  The relatively small flurry of controversy over GreenTech subsided, McAuliffe became governor and Mississippi gained thousands of jobs.  Or did they …

Virginia smells a rat.  The Virginia Economic Development Partnership (VEDP) did hold conversations with GreenTech about locating in Virginia during 2009.  GreenTech was scheduled to tour potential plant sites in Danville, Martinsville and Waverly on Oct 7th and 8th.  But then came GreenTech’s surprise announcement to locate in Mississippi on Oct 6.  Was the VEDP just a day late and a dollar short?  Not quite.  Virginia officials were not at all convinced of the overall GreenTech business model.  In a letter from the executive director of VEDP to Virginia’s Secretary of Commerce and Labor those concerns were spelled out.

Mississippi buys a rat.  Apparently, Mississippi saw no problems with a start-up car company building $15,500 to $18,000 electric mini-cars with a top speed of 45 mph for export to China.  Mississippi inked the deal and GreenTech opened a temporary location in Horn Lake, MS in July, 2012.  Bill Clinton and the governor of Mississippi joined Terry McAuliffe for an opening celebration at the site.  The good people of Tunica County (where 33% live below the poverty line) were well on their way to an economic miracle.  Or were they …

Failure to launch.  Virtually nothing came from the promised GreenTech deal.  GreenTech never ended any year with more than 100 employees.  In early 2017 GreenTech shut down its Mississippi operations.  Later that year Mississippi sued to get its money back.   Last February GreenTech filed for bankruptcy.

Peter the Pretty Good.  As GreenTech started to unravel ahead of the 2013 election erstwhile Bacon’s Rebellion columnist Peter Galuszka wrote an opinion piece declaring that Green Tech was a mess but not a scandal.  At the time Galuszka wrote that opinion piece GreenTech was still in business and employed about 80 people.  That would roughly mark the zenith of GreenTech’s operations.  Now that the company is dust in the wind lawsuits have been filed.  As Mr. McAuliffe is rumored to be considering a run for president GreenTech may yet graduate from mess to scandal.  It would be interesting to know how Terry McAuliffe fared from a personal financial perspective with GreenTech.  If he lost his own money maybe GreenTech is still just a mess.  However, if he made money on the failed deal it would be a scandal.

Caveat Virginia.  While VEDP’s BS detector seemed to work brilliantly in the GreenTech matter … that’s not always the case.  Bacon’s Rebellion readers should keep an eye out for an upcoming update to the Tranlin deal in Virginia.  It seems likely that the Tranlin deal is not going to end well for the Commonwealth.

4 responses to “Whatever happened to Terry McAuliffe’s GreenTech Automotive venture?”