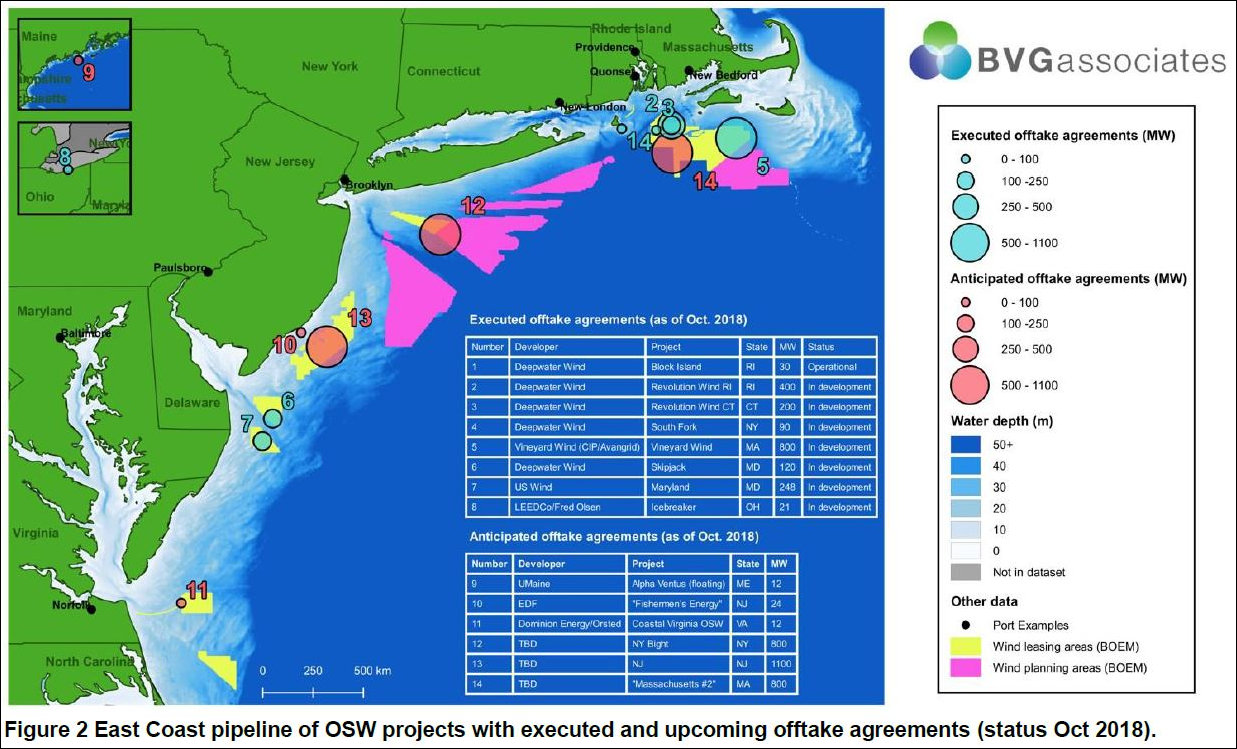 To build an offshore wind supply chain with thousands of construction, manufacturing and maintenance jobs, Virginia should collaborate with Maryland, North Carolina, and South Carolina, concludes a report issued last week by BVG Associates for the state’s Department of Mines, Minerals and Energy.

Offshore wind development is advancing rapidly in the Northeastern states, and if Virginia wants to maximize the benefits of the emerging offshore wind industry, it needs to move quickly. “Virginia has great potential and many unique advantages to attract this investment, but it must act now if it is to be a leader in OSW,” states the study, “The Virginia Advantage: The Roadmap for the Offshore Wind Supply Chain in Virginia.“

Other states also want to capture the jobs and investment associated with an offshore wind supply chain. New York has developed an OSW master plan. Massachusetts is positioning New Bedford, Mass., to support construction, assembly and deployment of projects off the New England Coast. And Maryland is mandating that companies use port facilities in the Baltimore region and Ocean City for construction, operations, maintenance and service.

BVG did not enumerate Virginia’s competitive disadvantages, but did mention several some in the study. First and foremost, the New England states, which are furthest along in developing their offshore wind resources, will have a first-mover advantage. Secondly, a Mid-Atlantic location is not particularly useful for serving a New England OSW industry. As BVG notes, day-to-day operations and maintenance “almost certainly [will] be provided locally.” Using a yardstick of 20-hour sailing time at 10 knots (about 200 nautical miles), BVG has identified only 380 megawatts of projects that will be serviceable from Virginia ports for installation and operational activities by 2025.

While BVG does not come right out and say so, Virginia is unlikely to serve the emerging New England OSW market. Apparently, that’s why the consulting firm recommends that Virginia would be better off focusing on the Mid-Atlantic market, which has up to 5 gigawatts of OSW capacity at various stages of development. The faster Virginia can move its own OSW projects along, the greater the odds that it can capture a chunk of the OSW supply chain.

Virginia envisions a regional cluster, likely defined by states from the Mid-Atlantic and Southeast. Development in New England states is advancing rapidly and this region will likely rely on a combination of European supply chain support and establishment of a cluster of smaller ports closer to the New England WEAs (Wind Energy Areas)….

Virginia has initiated discussions with Maryland, North Carolina and South Carolina and will continue to reach out to others. Virginia seeks to be inclusive regarding participating states, offering the industry the broadest network possible.

The problem is that every state pushing offshore wind wants to capture a piece of the supply chain. And not every state is embracing Virginia’s open approach. Consider Maryland. Writes BVG:

In Maryland, OSW developers have been required to make a $76 million investment in a Maryland steel fabrication plant and $40 million in upgrades in Baltimore ports. Maryland also has mandated that companies use port facilities in the Greater Baltimore region and Ocean City for construction and operations, maintenance and service.

However, Maryland port facilities have to consider bridge restrictions, BVG says. “This is just one example of how a regional multistate supply chain dialogue will benefit the industry, ensuring that scope is distributed between states with air draft restrictions in mind.”

This entry was posted in Economic development, Energy and tagged James A. Bacon, Wind power. Bookmark the permalink.