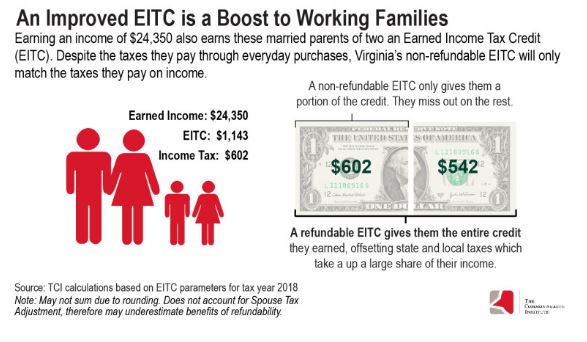 A useful EITC example from the Commonwealth Institute’s website. Whether anybody “earns” a credit is debatable, but that claim will appeal to those who benefit.

With the 2019 General Assembly now a handful of weeks away, the main advocacy group for a new cash welfare entitlement in Virginia is ramping up its efforts with various appeals, perhaps testing themes for later use.

On Wednesday on its website the Commonwealth Institute for Fiscal Analysis was arguing that the state Earned Income Tax Credit (EITC) should be converted to a “refundable” cash grant because of how it would help “communities of color,” who pay a larger percentage of their income in state and local taxes.

A few weeks back, the focus was on how “veterans and their families deserve full credit.”  And, of course, they have broken down their data by legislative district, conflating the number of people who claim the EITC already with the number who would benefit from their idea.  Not everybody who now claims the state EITC would qualify for a grant.

The first to advocate for converting the tax credit into a cash payment was Governor Ralph Northam, who mentioned it last summer as his favored use for the windfall state income tax dollars generated by conformity.  It has nothing to do with that windfall.  In order to benefit from this idea, you already must be paying zero state income tax.

In recognition of that, the argument now is people need to get the balance returned in cash because they are still paying sales, excise and other taxes, just not income taxes.  It’s not good enough to zero out their income tax, advocates claim.

As previously explored, the Earned Income Tax Credit is a program with conservative credentials and has succeeded in improving the finances of low-income working families.  At the federal level, if your income and family size qualify you for a credit which is larger than your tax bill, the difference is sent to you in cash.  To call it a “refund” is political fiction, because it is not cash you paid in taxes to start with.  It just comes at the same time the rest of us are getting refunds.

The federal version has grown into a major income transfer program, about $60 billion annually, and as always with these programs the push to expand them is constant.  A Democratic House of Representatives will be more attentive.

In an earlier tax reform effort, Virginia added its own version of the program, allowing a credit against state taxes equal to 20 percent of the federal EITC.  But Virginia did not take the second step of paying cash grants from state revenue to people who had larger credits than tax bills.  That is what Northam and the Commonwealth Institute are talking about doing now.

The cost impact is about $250 million, based on an earlier legislative proposal which failed, but a full analysis is lacking.  The cost to taxpayers – and it is a cost to taxpayers, not a refund and not tax reform – will need to be more carefully spelled out when a bill finally appears.  Advocates have developed a calculator for individuals and for some the grants would be substantial.

While this proposal is not tax reform, but instead is a way to share the windfall revenue with low-income working families, the idea is not incompatible with tax reform.  It would be possible to couple it with an increase in the standard deduction or some other change in personal income taxes that actually aligns with to the conformity windfall.  It is only a question of how much revenue with which the legislature is willing to part (for some, the answer is none).

The proposal to expand the standard deduction would reach far more Virginians – more in “communities of color,” more veterans, more in every legislative district – than would turning EITC into a cash grant.  The problem for some on the left is they would not all be poor or working-class and might even be well-off.

What they would not be is the same people.  As noted before, to qualify for the cash grant Northam and the Commonwealth Institute are talking about, you already must be paying zero state income tax.  If the EITC credit has already wiped out your state tax bill, an additional standard deduction is of no value.

But there is this, which should appeal to the Commonwealth Institute:  The additional standard deduction would add to the number of people who pay zero income tax.  An EITC cash grant would go to those already paying zero but would not grow their ranks.

And this:  The additional standard deduction would stay with you as your income grew.  EITC – whether a credit or both a credit and grant — shrinks as your income grows, and that is what people really want, growing income.

If the General Assembly must choose, it should choose tax reform and increase the standard deduction.  If its willing to do both, well, this is why the legislative process is great theater.  It cannot be predicted.