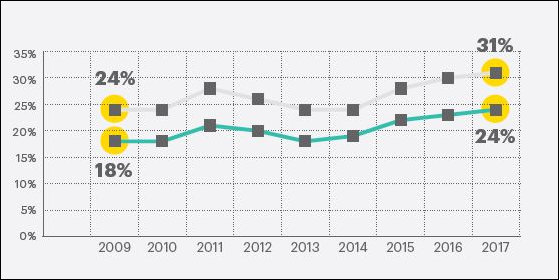 The cost of full-time infant care in Virginia has increased by 37% in inflation-adjusted dollars between 2008 and 2017, while women’s wages in the state have grown by only 5%, finds a new report by the National Women’s Law Center, “From Shortchanged to Empowered: A Pathway to Improving Women’s Well-Being in Virginia.” As a percentage of income, the cost of infant-center care has surged from 24% of women’s median earnings to 31%.

The study suffers from the usual victimhood rhetoric regarding women’s income — asserting that Virginia women earn only 80.9% of what men earn without adjusting for occupations, education and length of time in the workforce — which makes me wonder if the child-care data is similarly subject to tendentious analysis. With that caveat in mind, there does appear to be a problem, and it’s one that is especially devastating for poor women who see an ever large share of their income consumed by child care.

What the study doesn’t do is inquire into why the cost of child care has risen so precipitously in the past decade. For that information, we must turn to Adele Uphaus-Conner with the Free Lance-Star who, while dutifully and uncritically reporting the study’s findings, actually went out and interviewed someone in the community who knew something about the topic!

Home-based child care is usually cheaper than center-based care, but the number of home-based providers is dwindling, Carol Clark, executive director of Smart Beginnings Rapphannock Area, told Uphaus-Conner. Why would that be? She cited restrictions by Homeowners Associations and licensing requirements.

Clark said the high cost of child care is driven by staffing ratios required for certification. Child care providers are required to employ one caregiver for every four children between the ages of birth and 16 months. For toddlers ages 16 to 20 months, the staffing ratio is five children to one caregiver.

And because many people in the Fredericksburg area commute to Washington and Northern Virginia for work, local day care centers often must be open up to 14 hours a day, from 5 a.m. to 7 p.m.

“There is a lot of cost involved,” Clark said. “People who open preschools, even with full day care, often won’t provide infant or toddler care. If they do, that’s a break-even if a program is lucky, and usually it’s a financial loss. Basically they are providing a service to the community.”

Let me refresh peoples’ memories. In 2014 the Washington Post and other media created an uproar over toddler deaths and injuries in “unregulated” daycare settings. More than 60 children had died in childcare settings over the previous 10 years, an average of 6 per year. The General Assembly predictably tightened staffing and licensing requirements, which effectively put many informal daycare arrangements out of business.

One presumes that the incidence of child neglect has declined as a positive result. The Virginia Department of Social Services (VDSS) reported only two child deaths in day center settings in the nine months up to and including July 2018. Whether that lower rate was typical or atypical, however, is impossible for the public to determine because previous years’ reports do not appear to be available online.

VDSS also reports “child serious injuries” at both “licensed” and “regulated” day centers. Over the same nine months, there were 525 reported injuries in licensed day centers — about one incident for every 505 children. By contrast only 6 injuries were reported for “family day homes,” or about one incident per 2,390 children. Likewise, there were only 32 injuries reported in “religiously exempt” day centers, or about one in 2,500 children. By this metric, licensed child care centers appear to be doing a much worse job than family day homes or religiously exempt facilities. Whether those ratios are better or worse than in the pre-regulatory era, I could not determine.

However, we are now living with the entirely predictable and foreseeable consequence of tighter standards — a cost crunch. I predict it’s just a matter of time before the Washington Post begins reporting on how unaffordable child care has now become.

The National Women’s Law Center’s recommended solution? See if you can pick the correct answer

Yes, you got it! More state and federal funding. Oh, and let’s not forget that the National Women’s Law Center also makes an issue of the low pay for childcare-center employees. So, while we’re at it, let’s mandate higher pay, which will require childcare centers to increase fees even more!

This entry was posted in Children and families, Poverty & income gap, Regulation and tagged James A. Bacon. Bookmark the permalink.