Symbol of Brotherhood… or Race Hatred?

Old Rule: it isn’t socially acceptable for Americans to display the swastika, an ancient symbol expropriated by the Nazi Party that has become synonymous with race hatred.

New Rule: it isn’t kosher for Americans to display  a symbol that sensitive individuals might construe to resemble a swastika, however remotely.

The superintendent of Hanover County Public Schools has issued a groveling apology for imprinting the logo, shown above, upon t-shirts at a professional learning conference.

“One of our teachers designed the logo intending for it to represent four hands and arms grasping together – a symbol of unity for our all-county professional learning conference. Nothing more,” wrote Superintendent Michael Gill in a message to families and staff, as reported by the Richmond Times-Dispatch. “While we are confident that the logo was created without any ill-intent, we understand that this has deeply upset members of our staff and community who see the logo as resembling a swastika.”

You know who deserves an apology? The person who designed the logo.

In 21st-century American society, the swastika is arguably the ultimate symbol of evil. Thousands of Americans died fighting a war to defeat everything the symbol stood for. Americans still repudiate it for good reason. But we approach the point of absurdity when we apologize for logos and other symbols that bear superficial parallels to the emblem.

Here’s a reminder of what the Nazi swastika looks like: 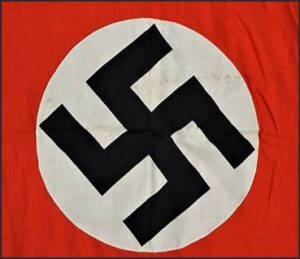 Compare that to the Hanover logo. Different colors. Different background treatment. Two intersecting lines compared to four interlocking lines. No circles at the end of the lines. But, yeah, I suppose it resembles the Hanover logo in that it does have lines.

I’m sorry. This controversy is just crazy. The brotherhood and unity message of the Hanover logo, which evokes the common, uplifting image of four interlocking arms, is entirely appropriate. 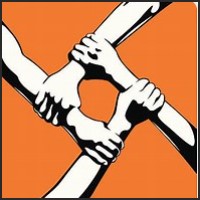 The teacher who designed the logo deserves an apology; the Hanover superintendent needs to grow a pair; and those who went into conniptions need to get over it.