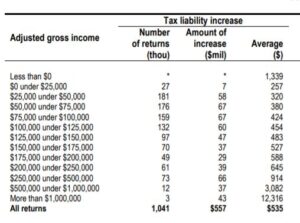 Income breakdown and average “windfall” tax in 2018 on the taxpayers who paid more. All averaged more than $220. Source: Secretary of Finance and Ernst & Young. Click to expand.

Virginia ended the last fiscal year with about $797 million more in revenue than projected, and the Northam Administration credits $455 million of that to higher taxes on about 30% of taxpayers caused by conforming to the new federal tax law. More than 700,000 tax returns stopped claiming state itemized deductions, accounting for much of that.

The tax conformity windfall amount was calculated by outside consultant Ernst and Young, Secretary of Finance Aubrey Layne told a meeting of the combined legislative money committees Tuesday. That is not the same firm hired last year to project the state tax impact of the federal Tax Cuts and Jobs Act. Layne said he wanted a different team looking at the results.

The E&Y report is the final 23 pages of Layne’s slide presentation to the committees, here.

The first company, Chainbridge Software, LLC, estimated (here is their 2018 document) the first-year tax hike from Virginia adopting the new federal rules – with no policy changes to compensate – would be $594 million, 28% higher than E&Y reported. The 2019 General Assembly made no tax policy changes for individual taxpayers for 2018 and during the session Layne continued to express confidence in those estimates.

The smaller result measured by Ernst and Young is based on an actual comparison of 2017 and 2018 tax returns, with an effort to tease out the higher revenue due to the TCJA tax changes from the higher revenue due to income growth or asset sales. It looked only at returns filed by July 1, so individual and business returns delayed or extended for later filing are not included. That may account for some of the difference with Chainbridge, and any windfall taxes paid by them will show up in fiscal year 2020.

The 200,000 late individual returns and 1,100 late corporate returns need to be wrapped in to draw firm conclusions, and those conclusions will matter because this windfall is not just a one-time thing. The General Assembly has promised to track and segregate the higher taxes caused by conformity into future years and use the revenue for future tax reform efforts.

The first of those for individuals kick in with tax year 2019, now underway. The General Assembly increased the standard deduction starting this year, from $6,000 to $9,000 for a couple. For 2019, unlike in 2018, if you do take the itemized deductions at the state level you are not limited by the $10,000 cap on state and local tax which can be deducted. Those two steps will give back much, but not all, of the ongoing windfall revenue.

The General Assembly also restored a wealth tax provision for 2019, the Pease Limitation, which had been a part of federal law, but which was eliminated by the TCJA. The details on how the state will impose that with the IRS no longer doing so need to be worked out.

For this year, of course, all Virginia taxpayers get a check instead of tax reform. Most will get $110 per individual or $220 per couple. It will return, or counteract, $431 million of the $466 million in higher individual taxes for that year. Of course, many taxpayers saw no change from conformity, some saw taxes go down, and some paid a far higher windfall tax than $220.

More than 1.9 million of the 3.4 million returns examined showed no tax change due to TCJA. (E&Y Table A-3, reproduced in part above.) Of the rest, 417,000 showed state tax was reduced and only slightly over one million paid all the higher taxes. In no single income category for that final group, from negative taxable income to taxable income over $1 million, does the $220 check cancel the tax increase.

The coming check is largely an income transfer payment from the unfortunate one million to those other 2.4 million taxpayers, coming weeks before an election.

The Chainbridge report also predicted that the impact of conformity to TCJA would fall on only a small percentage of total taxpayers, and many would see state tax reductions or no change. E&Y found that for 3,000 returns above $1 million the tax hike averaged $12,316 and for 12,000 returns between $500,000 and $1 million it averaged $3,082.

What the E&Y report, at least the portion released, does not include are any forward-looking estimates for the out years. Chainbridge had looked out six years and estimated $4.6 billion in higher taxes over that period. Other than in the first two years, the legislative action had not counteracted most of that.

If, as expected, the taxpayer checks total $431 million, that will leave only about $25 million to be held in the Taxpayer Relief Fund established by the 2019 conformity legislation and the state budget. The state budget revenue estimates consciously excluded any conformity windfall projection for either year, so additions to the Taxpayer Relief Fund in this tax cycle are also possible.

But rule one in Richmond is no General Assembly can bind the actions of the next one. The fate of Taxpayer Relief Fund will be determined in 2020.

This entry was posted in Budgets, Taxes and tagged Conformity, Stephen D. Haner. Bookmark the permalink.