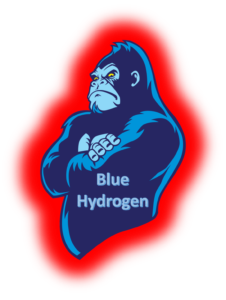 In recent discussions on Bacon’s Rebellion, readers have been talking about hydrogen as an emerging fuel source. Hydrogen, not electricity, may be the ultimate transposition fuel of the future. Let’s call it the 800-lb blue “gorilla” in the room.

U.S. liberals and electric vehicle advocates see hydrogen as a threat to their vision of the energy future. They believe in one winner, and only one winner, and that winner needs to be battery-electric vehicles (no hybrids). The problem with this “blue” logic is that we could be putting political correctness ahead of the best vehicle choices for America. Among other issues, the lithium, rare earth minerals, and electrode-grade graphite, needed in great abundance for EVs, come mostly from China.

Let’s give hydrogen, H2, the consideration it deserves. Today, most H2 is called “Gray Hydrogen” because the process of extracting it from natural gas generates some CO2 emissions as a chemical byproduct. However, the CO2 so generated is high purity and is easily recovered for other uses. If the CO2 is recovered, we get so-called “Blue Hydrogen,” which is seen as more sustainable. Some purists demand only “Green Hydrogen,” in which hydrogen is extracted via electrolysis using renewable energy.

Last but not least, there is “Turquoise Hydrogen,” a hoped-for technology that makes H2 from natural gas without creating any CO2 byproduct; eg: reacting methane (CH4) to form hydrogen and elemental carbon. The turquoise vision is in the R&D stage.

Globally, the H2 future is quickly emerging. Toyota recently produced a prototype Corolla that runs on hydrogen gas. The H2 Corolla has no fancy fuel cells: it burns H2 instead of gasoline in a conventional internal combustion engine. Toyota is also refining its fuel-cell Mirai sedan, which is already on the roads in California. For those who feel we need to keep up with China, China is certainly making progress towards the H2 society of the future as well.

There is one sticky logistics problem with Blue Hydrogen: Where can we dispose of the recovered CO2? Last week, it came to light that the oil industry believes that the geologic formation underneath the Gulf of Mexico is a major CO2 disposal option. For eastern USA, I have heard that the basalt layer, deep underneath some states including parts of Virginia, could accept large amounts of CO2.

To my knowledge, however, nobody but me is thinking about that basalt layer.  If hydrogen is the energy source of the future, it would behoove Virginians to think how to exploit it. One action item might be to define commercial uses for CO2 and/or disposal options in our region. And if the Mountain Valley Pipeline is ever approved, another might be to start thinking about establishing Southwestern Virginia as a hydrogen manufacturing hub for the I-81 truck traffic of the cleaner future.

These ideas might seem pie-in-the-sky, but the technology is progressing quickly, and we should entertain as many energy options as possible.

Bill Tracy is a retired engineer living in Northern Virginia.

This entry was posted in Energy and tagged Bill Tracy. Bookmark the permalink.