“Retained and Contextualized” at VMI 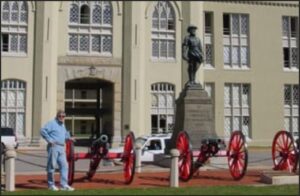 The Stonewall-Jackson-statue-at-VMI controversy is one of many, both in Virginia and across the country, where communities and their elected/appointed representatives have grappled with tough questions: how do we honor past heroes in modern times? Do we continue to honor them at all?  When do the feelings of a minority of a community outweigh the desires of the majority?  VMI, and Virginia, are just now really starting to deal with these questions, when it comes to the state’s history, up to and including the Civil War.

After removing the statue of Stonewall Jackson from the Main Post and his name from the Post chapel, Virginia Military Institute officials arranged for the inscription of the Confederate general’s name to be sandblasted off an arch, commonly known as “Jackson Arch,” of the Old Barracks during the 2021-22 Christmas break.

Four months later, on April 30th, the Commemorations and Memorials Naming and Review Committee (CMNRC), created to review all Confederate iconography on the Lexington campus, concluded its business. “[T]he VMI Board of Visitors,” said the committee in a public announcement, “voted to retain all the remaining statues and building names. Additionally, the vast majority of the other commemorative items, artwork, and memorials that had been the subject of the committee’s scrutiny because of the item’s association, however indirectly, with the Civil War, slavery, and the Confederacy will remain.” Some of the items that remain will be “retained and contextualized.”

An explanation of “retained and contextualized” appears in the “State of Confederate Iconography on the Post” document published in April: “The item should be retained by VMI, but may be moved to a different location on Post, may have appropriate contextualizing information made available, and/or may have current text revised.”

On August 1st I contacted VMI, and asked that the following question be posed to the CMNRC:

According to the “Status of Confederate Iconography on Post,” dated April 2022, many of the building names for former Confederates are going to remain on VMI Main Post. At least one of the namesakes performed noteworthy service for the Confederacy.  John Mercer Brooke was the head of the Confederate Ordnance Bureau and “designed the key features of the ironclad CSS Virginia (Merrimac).” (“Inventory and Review of Monuments And Memorials Related to Confederate Iconograpy, Jan 2021).  John Preston was a Confederate colonel who served on Jackson’s staff.  These building names will be retained, but contexualized.

If Brooke and Preston could be contexualized, why couldn’t Jackson Arch be contexualized?  Why was it deemed necessary to sandblast an inscription of a nickname off a National Historic Landmark (Old Barracks)?

I received a response attributed to Richard Hines ’66, former chair of the VMI Board of Visitors’ Commemorations and Memorials Naming and Review Committee. He wrote:

The decision to remove the Ezekiel statue of Jackson was made by the Board in October 2020 before the formation of the Commemorations and Memorials Committee.  The Committee was formed shortly thereafter to ensure that VMI’s landscape would be welcoming and inclusive for all, irrespective of one’s familiarity with the Institute’s origins and history. The actual decision making of the Committee — and ultimately the Board — was controlled by the criteria document adopted by the Board in January 2021 (the criteria document was patterned after a cultural heritage document issued by a federal agency following the 2017 Charlottesville disturbances). As a result, the original intent and purpose of the tributes were analyzed and balanced against today’s culturally and socially diverse societal interests.

On the one hand, the original intent of the veneration of Jackson was to “Stonewall” Jackson the brilliant Confederate general, not to Major Thomas J. Jackson, unpopular VMI professor. Thus, the purpose of the veneration triggers the line in the criteria document: “If the point of concern is controversial iconography inherent or fundamental to the design of the resource (the tribute), preservation of the memorial should be reviewed and only the most compelling of reasons should allow its continued display.”  The Committee spent months analyzing reasons that might allow the continued display of the Jackson tributes. The Committee concluded there were not “the most compelling of reasons” to justify the continued naming of the arch and Memorial Hall and made its recommendation to the Board accordingly.  The Board unanimously approved the recommendations.

On the other hand, the original intent of the veneration of Messrs. Brooke and Preston was to them as educators (and in the case of Preston one of the founders of and first two professors at VMI) and to their long service to VMI — between them they taught at VMI for more than 60 years, were beloved professors, and were nationally renowned in their professions as educators (and in the case of Brooke, world renowned as sailor, engineer, and scientist). So unlike the Stonewall Jackson decision in which the veneration was to his Confederate army service, the decision to maintain the Brooke and Preston tributes was controlled by a different sentence in the criteria document: “On the other hand, if the modern concern (here service in the Confederacy or enslaved person ownership) is tangential to, or not related to the recognition, the honoree’s contributions to society and VMI may prevail as reason for continued public recognition.” The Committee determined that Brooke’s and Preston’s contributions to society and VMI prevailed over the modern concerns, made its recommendation to the Board, and the Board unanimously approved the recommendations to preserve the tributes.

The Virginia Military Institute is expected to produce leaders, both military and civilian. Good leaders set good examples for the rest of us to follow, or to be influenced or guided by. Accordingly, VMI’s handling of the Stonewall Jackson statue controversy should be studied and assessed, so we can pull as many lessons from it as possible.  We should all stipulate that VMI had a very tough job here. After seeing what VMI has gone through, anyone who says that history is an easy career field might want to think twice.

This entry was posted in Culture wars, Virginia history and tagged Donald Smith. Bookmark the permalink.