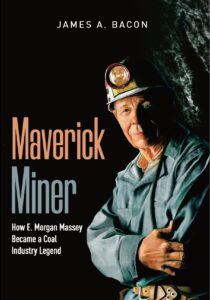 I have been neglecting my duties at Bacon’s Rebellion over the past three years because I was engaged by E. Morgan Massey to write a history the Massey family and the A.T. Massey Coal Co. Under the terms of the deal I struck with Morgan, I was allowed to repurpose that book for a wider audience. The result is “Maverick Miner,” which focuses mainly on Morgan, whose 75-year career (he’s 94 years old now) spans the entire post-World War II history of America’s coal industry.

“Maverick Miner” is available in both print and ebook editions on Amazon.com.

RICHMOND, VA—E. Morgan Massey made headlines in the 1980s as president of the A.T. Massey Coal Co. when he contested the railroads’ stranglehold on coal export traffic and challenged the powerful United Mine Workers of America in a long and bitter strike. If his career had ended in 1991 when he reached mandatory retirement age, he would have been one of the most consequential leaders in modern U.S. coal industry history.

But at 65 years of age, Massey’s adventures in the coal industry had just begun. Working out of a tiny office in Richmond, Virginia, he proceeded to compete with the international energy giants in opening the coalfields of China and South America to global commerce.

A new book, “Maverick Miner,” traces the arc of a phenomenal career that spans more than 70 years: through decades of booms, busts, deals, technological change, labor conflict, relentless innovation and a remorseless struggle for survival in one of the world’s most competitive industries.

Massey’s bid to open the virgin coalfields of Venezuela, the Mina Norte surface mine, ran into a buzz saw by the name of Hugo Chavez. “Maverick Miner” reveals the never-before-told story of how crony socialism destroyed a fledgling industry that could have been a great boon to the Venezuelan people.

For the first time, the book also recounts Massey’s greatest coup, the development of the Daning mine in communist China. At one point, Daning might have been the most profitable mine in the history of coal mining. Not only did Massey orchestrate one of the most successful investments ever by an independent American entrepreneur in the People’s Republic, Daning introduced U.S. underground mine-safety practices that have saved the lives of thousands of miners.

Now 94, Massey still isn’t done. He has launched one more business venture, Minerals Refining Company, that has potential to scale into a billion-dollar enterprise.