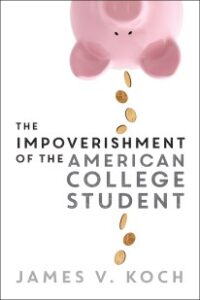 Former Old Dominion University president and current emeritus professor of economics James V. Koch is willing to shoulder his share of the blame.  “I was president for fifteen years, so I sang some of the same songs that presidents and administrators sing these days.”

Those would be the siren songs sung when seeking major and continuous increases in university tuition and fees, Koch told The Chronicle of Higher Education in an interview on the issue.  It is the subject of his new book, “The Impoverishment of the American College Student,” just released by Brookings Institution Press.

What he is saying is hardly a fresh insight for Bacon’s Rebellion.  The message may resonate a bit because of who is saying it.

The Virginia General Assembly has sought to take the issue off the front burner with its successful effort to freeze in-state tuition at the state schools for the term about to start.  But that follows the massive run up in fees over the past few decades, to the point of major economic harm outlined by Koch and others before him. 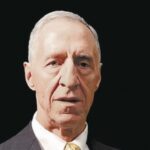 In a recent guest column in the Richmond Times-Dispatch, he tweaked the best-known Virginia schools for their new economic segregation, with students from the lowest three of the family income quintiles receiving less than one quintile of the admissions. This despite the grants and need-based scholarships available, often financed now directly by the students paying in cash (or with debt.)

In fact, heresy of heresies, Koch harkens back to former Education Secretary William Bennett’s warning in 1987 that burgeoning federal subsidies would unleash corresponding price increases at the schools, a counterproductive outcome that is still highly disputed.

Ultimately, however, he blames the leadership at the institutions.  Here’s this from the article on his book:

How do we make college more affordable? Every tuition and fee increase at a public institution is approved by a board of trustees or regents. Usually the votes are unanimous. I was president for 15 years, so I sang some of the same songs that presidents and administrators sing these days [when they want tuition hikes]. Presidents end up co-opting their boards. They give them tickets to all the events. They do all kinds of things that make the board members feel good and make the board members feel this is really important and that they need to do what the president asks them to.

So you think boards should be doing a better job of holding the line on tuition increases?Yes. Part of the problem is they get appointed by governors or elected officials and think they’re supposed to be advocates for the institution rather than representing the public and taxpayers and students. They become advocates for the institution and perhaps even the president rather than saying: We’re here to represent citizens and taxpayers and make sure the university is doing what it should be doing for society at large.

He’s no fan of the proposals circulating among various Democratic presidential hopefuls to eliminate existing student debt. “It would set into motion a series of behavioral disincentives that would maybe cause us to end up being worse off. If institutions know that student debt is going to get canceled, that reduces the inhibitions they might have toward increasing their prices. Why control prices if someone is going to come in and take care of the problem for you?”  he told the Chronicle of Higher Education.

It is always important to understand who you work for in any endeavor, who is the boss and who is the customer. For too long very few in higher education have put the student and the student’s family, if paying the bills, on top of the pecking order. With 20-20 hindsight on a long and successful career as teacher, administrator and then consultant, Koch now does and is recruiting others.

Having delivered on a plan to freeze Virginia tuition for one year, the question now is can the General Assembly do it again? In recent days Virginia House Speaker Kirk Cox, who first has to win his own seat in a newly difficult district drawn by a court, has promised to make that a high priority in the 2020 session if he’s there. Unlike most other issues to be fought over until November, odds are this won’t spark partisan debate but a chorus of me-too.

This entry was posted in Education (higher ed) and tagged Stephen D. Haner. Bookmark the permalink.