Is It Time To Dust Off the Nixon – Ford Playbook? 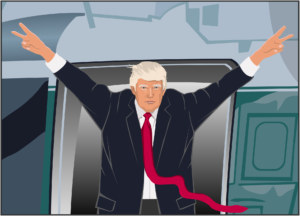 Image by heblo from Pixabay

Mea Culpa. I’ve long thought that’s it’s easier to get forgiveness than permission  So I’m going to join Jim Bacon and break the cardinal rule of Bacon’s Rebellion … sticking to topics limited to matters of Virginia public policy. Just this once.

Trump Gotta Go. By all accounts President Donald Trump is cocooned in the White House “mentally unreachable” to his staff and Vice President Pence. This would be unacceptable for two days let alone two weeks. America has many enemies and a mentally crippled president invites disaster. Beyond that, America has vast military might and a mentally crippled president could be tempted to use that might in ways that would be disastrous. Trump gotta go.

Exit doors. There are three exit doors that could be considered. The 25th Amendment, impeachment and resignation. I sincerely doubt that either of the first two are practical. Wikipedia provides a simple definition of the 25th Amendment. The 25th Amendment allows the vice president, together with a “majority of either the principal officers of the executive departments or of such other body as Congress may by law provide,” to declare the president “unable to discharge the powers and duties of his office” in a written declaration. So many of Trump’s “principal officers” have resigned or been fired that it’s a crap shoot what a majority of those who are left would choose to do. Unless we want to continue to shred the Constitution, impeachment requires that the president and his legal team have adequate time to prepare a defense. That leaves resignation.

The Pence plan. One suspects that even in a challenged mental state Donald Trump will look out for Donald Trump. A promise of a blanket pardon for all actions taken during his presidency would be compelling. Whether it’s exactly legal is a good question but back room deals get done all the time in Washington. The pardon would also be contingent on Trump never seeking political office again. Obviously, this plan would need to be proposed by Vice President Pence.

Additional benefits. Trump’s supporters would see a Trump resignation for exactly what it is — a cowardly compromise made to save his own skin. Who would march, fight or worse for such a person? A resignation effectively neuters Trump with his base. Once the resignation occurs, Vice President Pence could do whatever possible to make the Biden Administration transition less chaotic.

Blowback. Pence’s political career would be ruined much like Jerry Ford’s political future was ended by his pardon of Nixon. There would probably be protests, some violent, from those on the left who felt Trump got away with crimes. Those are the downsides. But Pence has already tainted himself and probably ought to consider a non-governmental position and the protests will subside as people forget about Donald Trump.

Goodbye and good riddance. The sooner Donald Trump disappears from the political scene the better. Years of dragging him through various lawsuits of debatable merit and possibly criminal trials would prove nothing. Moreover, it would make him a martyr to those in his base of support who have proven that they are willing to commit violence in his name.

This entry was posted in Governance and tagged DJ Rippert. Bookmark the permalink.