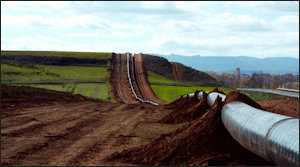 The delayed Atlantic Coast Pipeline is undergoing a major change due to rising costs and legal delays – The Southern Company, based in Atlanta, is backing out of the project as an equity partner.

According to an announcement late Tuesday, Dominion Energy will acquire The Southern Company’s 5% stake in the natural gas project whose cost has risen from $5.1 billion to $8 billion thanks largely to legal challenges by environmentalists and regulatory agencies. The new ownership structure will be 53% Dominion and 47% Duke Energy, based in Charlotte.

The Southern Company will be still related to the project as an “anchor shipper,” the announcement said.

Another surprise in the announcement is that the pipeline project will buy a small Liquefied Natural Gas plant in Jacksonville, Fla. Dominion will assume ownership of it from Southern. That raises questions because for years Dominion has vigorously denied that the 600-mile-long pipeline has any link to plans to export LNG. Dominion does own an LNG export facility at Lugsby, Md. on the Chesapeake Bay that exports LNG mostly to Asian utilities.

Dominion Chief Tom Farrell told analysts at a conference call yesterday that Dominion has explored using LNG to power merchant ships. More ships are being equipped with LNG because it is cleaner than using traditional bunker oil. The International Maritime Organization of the United Nations has instituted new rules calling for emitting less sulfur and other polluting chemicals beginning in  January.

According to S&P Global, The Southern Company bailed on the pipeline because of its concerns of delays and soaring costs.

Pipeline partners have also shifted their thinking to simply getting a basic pipeline completed rather than think about expanding lines from it, a Dominion official said during the conference call, according to S&P Global. The original plans called for the pipeline would run from West Virginia, through much of Virginia and terminating at the North Carolina-South Carolina border.

ACP partners now hope to finish construction at the end of 2021 and commission it in 2022. The original commissioning date was 2018.