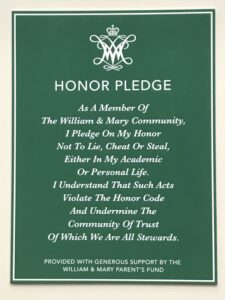 There have been numerous articles recently on this blog about the honor codes at various Virginia colleges and universities. I remember a ceremony in which we incoming freshmen at the College of William and Mary signed our honor code pledges.

These codes set out the behavior that people expect of each other and themselves in a civil society. Regrettably, they seem old fashioned and perhaps out of date in light of the situation today in which a major party leader in Congress blatantly lies publicly about his reactions following a major political crisis and the members of his party do not seem to want to hold him accountable for those lies to the public.

This entry was posted in Politics and tagged Dick Hall-Sizemore. Bookmark the permalink.