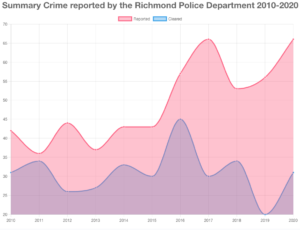 Summary of homicide totals and homicides cleared reported by Richmond police to the FBI 2010 to 2020. Number of 2021 Homicides = 90

We have seen considerable reporting on violent crime in Richmond, homicides in particular. There is reason for that.

The statistics are appalling and getting worse.

There are lots of conclusions that can be drawn from all of the data. Different people will make different interpretations.

My personal biggest concern is the vast gulf starting after 2016 between the numbers of homicides and the numbers cleared. The more that criminals think they can get away with homicides, the more there will be.

So what about 2021? Ninety homicides.

First let’s look at the Commonwealth’s Attorneys in office during the murder spike. Then the police.

Mike’s keen and progressive legal mind, fairness and commitment to justice, both inside and outside the courtroom, has made Richmond a safer and more equitable place to live.

“Has made Richmond a safer … place to live.”

Ms McEachin was elected Commonwealth’s Attorney for the City of Richmond in November, 2019. From her official website:

All of that has certainly achieved results. But perhaps not results she will list on her website.

2021 and 2022. By the end of 2021, Richmond Police reported 90 homicides, nearly half again as many as had been reported in any year in the previous decade. The full year 2021 data are not yet in the FBI Uniform Crime Reporting (UCR) system, so the figures I will show below do not include either those 90 homicides or their clearance rate.

Chief Gerald Smith in January of this year said:

The concerning trend officers are seeing is who is committing these acts of violence. Across Richmond, youth are becoming the ones behind these violent crimes increasingly.

However, beyond the individuals responsible, these crimes are also claiming the lives of our youth — like that of Abdul Bani-Ahmad and Rahquan Logan. The two were killed during a quadruple shooting of Nine Mile Road in November.

“We have no idea what kind of contributions this 9-year-old or the 14-year-old would have done or given to the city, given to the world itself,” Smith said. “This was a senseless act of violence.”

Those acts of violence increased within the last three months of 2021. Thirty-three percent of the overall homicides happened in that time frame.

The Richmond Coalition of Police (RCOP) put up billboards at the end of May of this year declaring that “public safety is in a crisis due to poor pay and staffing.” More such billboards have gone up since. That certainly can be a significant part of the crime clearance problem.

Richmond City Council recently rejected a $4 million RCOP pay plan but still agreed to an increase in the upcoming budget. The city will also pay for a study to examine how much city first responders should get paid. However, the new billboard shows that RCOP is not satisfied.

82 police officers have separated from the Richmond Police Department between April 2020 and April 2021, according to a spokesperson.

51 officers resigned during that time–a year full of sustained pressure on the department in the wake of protest and riot after the death of George Floyd.

In the January article, Chief Smith defended the quality of his officers, but did not offer an opinion on the number of them. He blamed the violent crime increase on guns being in the wrong hands, pandemic stress, and mistrust in police.

He addressed citizen reluctance to help by saying:

We have to get trust back in to the police again so people can pick up the phone and give us a call.

So, we have officer shortages and citizen unwillingness to help to blame for low clearance rates.

Smith said his department is still working on efforts to “reimagine public safety.”

I think the citizens can reimagine it for him.

Neither the police union nor Chief Smith brought up the Commonwealth Attorney’s progressive criminal justice reform policies. But then payback is hell.

Data 2010 – 2020.  To see what had happened in Richmond homicides before 2021, I went to the FBI Uniform Crime Reporting (UCR) website to get the data on Richmond homicides over the latest available ten year period, 2010 – 2020.  The FBI’s Crime Data Explorer (CDE) is the digital front door for UCR data. All data presented here are from the City of Richmond Police Department as reported to the FBI. 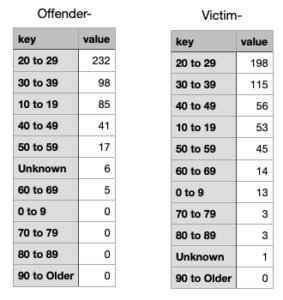 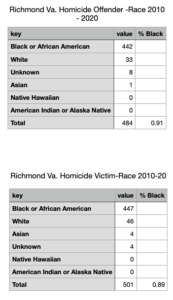 For homicide type of weapon and linked offense see here.