Getting Virginians their Lives Back One License at a Time 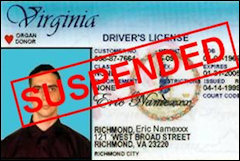 L.C. lived with a relative in Amelia County, raising her daughter and driving to her job at a Richmond-area hospital. She frequently loaned her car to the family member. Unbeknownst to her, the relative racked up frequent toll violations. The charges quickly added up — $0.75 per toll, plus $25 administrative fees for not paying on time, plus $500 court fines, plus court costs. The fees, fines and penalties eventually reached an astonishing total — nearly $100,000. Adding insult to injury, Carter had her license yanked.

(Update: We have deleted L.P.’s full name and place of employment at her request. — JAB)

By working with Drive-to-Work, a Richmond-based nonprofit organization dedicated to helping lower-income Virginians get their driving rights restored, she managed to get her licensed reinstated. Now Drive-to-Work is working with her to resolve the toll-violation cases.

Virginia law allows for the suspension of revocation of driver’s licenses for a wide variety of offenses that have nothing to do with bad driving — collecting court costs, non-payment of civil judgments, and failure to pay child support. Of Virginia’s 5.8 million licensed drivers, 974,000 are under suspended-license orders. While some kind of sanction may be called upon for their offenses, says Drive-to-Work President Randy Rollins, a person deprived of a driver’s license often is unable to work and meet the very obligations the suspended licenses are meant to punish.

Ten years ago when Rollins first approached members of the General Assembly to reform the laws, he typically got a frosty reception. But attitudes are changing among both liberals and conservatives, he says. Restoring drivers licenses increasingly is seen as an issue that both advances social justice and supports individual responsibility and self-help.

The nonprofit group operates first and foremost to help people like Carter get their licenses back and work out arrangements so they can pay their fees, fines and penalties. Case workers have helped more than 2,000 individual clients to date. In a related initiative staffed by volunteer attorneys, Drive-to-Work has given 96 prison seminars to help offenders get their licenses when they are released from custody.

Rollins also is working with the Department of Corrections (DOC) to remove another potential impediment — the need to attend a driver improvement clinic before getting a license reinstated. What better time to attend such a clinic, he asks, than when offenders have lots of free time in prison? Drive-to-Work will deliver a clinic online for $65 per participant, a sum that will be reduced to $20 after DOC and Drive-to-Work subsidies. That program is temporarily in limbo up as DOC undertakes the migration of its IT systems to the state’s new vendor, but Rollins is optimistic the issues will be worked out soon.

In the meantime, Rollins, who served as Secretary of Public Safety during the Wilder administration, is working to help lawmakers identify ways to help the cause. He highlights one piece of successful legislation and two additional measures that he would like to see passed.

Pay plans for court fees. Millions of Virginians live paycheck to paycheck, and they don’t have a spare $1,000 to pay court fines and fees. Rather than suspend their licenses, making it harder to work and pay back anything, a law sponsored by Republican Del. Manoli Loupassi allowed for repaying the fines in agreed-upon installments and restoring the license when the agreement was signed, not later when the fines were paid in full.

After a year’s experience, says Rollins, the law appears to be making a difference. Judges are considering individual circumstances when setting payment agreements, many are requiring lower down payments, and a 10-day grace period is preventing defaults.

Suspensions for civil judgments. If a motorist drives a car while uninsured and causes an accident, his or her license can be suspended for failure to pay civil judgments to the insurance companies. While Rollins agrees that there should be sanctions against people who fail to pay, he says suspending their licenses for reasons unrelated to safety violations makes no sense. The license suspension is just another collection tool. If you owe a hospital money, the hospital can’t suspend your license. If you default on your credit card, the card company can’t suspend your license. Why should insurance companies be treated differently?

Child support payments. Licenses can be suspended for failure to pay child support. Child support obligations can run into the tens of thousands of dollars. While the courts do allow payment plans, the minimum down payment is too high, Rollins argues. A $20,000 obligation, for instance, would require a 5% down payment or $600, whichever was higher — often beyond the means of the poor and near poor. Del. Betsy Carr, D-Richmond, sponsored a bill last year that would have set the obligation at the lower of 5% or $600. The bill was defeated last year.

“Suspensions for child support have nothing to do with traffic safety,” says Rollins. In fact the suspension can be a barrier to gainful employment and reduce the chances for paying any child support.”

This entry was posted in Courts and law, Crime , corrections and law enforcement, Poverty & income gap and tagged James A. Bacon. Bookmark the permalink.