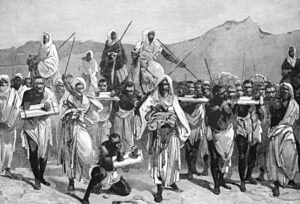 A 19th-century engraving of Arab enslavers.

If they’re going to write about the life of Stonewall Jackson and the statues erected to honor him, it would behoove Washington Post reporters to get their facts straight. A few days ago, Kerry Dougherty highlighted a howler of an error in an article by Post reporter Dave Phillips, who wrote that Jackson became an instructor at the Virginia Military Institute after the Civil War. (To those new to Virginia, Jackson died in 1863 after the battle of Chancellorsville.)

Ian Shapira, another Post reporter, is guilty of making a historical error. which he has repeated in more than one article. It crops up in his latest update on the latest turmoil at Virginia Military Institute, where it transpires that two board members resigned without explanation before the Board of Visitors voted to remove the Jackson statue.

In that article, Shapira writes: “Jackson, an enslaver of six people, taught at VMI before helping to lead the Confederate Army.”

Yes, it is a historical fact that Jackson owned six slaves, but he did not enslave them. The definition of “enslave” is to make someone a slave, or to cause someone to lose their freedom of choice or action. The people who enslaved other people during Jackson’s lifetime were located in Africa. By the 1860s, European and North American nations had suppressed the Atlantic slave trade, but the horrendous practice was alive and well in eastern Africa where Arab slavers were still raiding villages and “enslaving” the inhabitants for sale in Indian Ocean slave markets. Jackson did not “enslave” anyone.

Some might respond that the difference between “owning” and “enslaving” a person is a semantic distinction of no importance. Evil is evil. Perhaps that is true as a moral argument. But the fact is, owning and enslaving two are very different things. It would have been a trivial matter for Shapira to write, “Jackson, who owned six slaves, taught at VMI.”

His use of the term “enslaved” in more than one article betrays either an unwitting imprecision in language or a conscious desire to portray Jackson in the worst possible light.