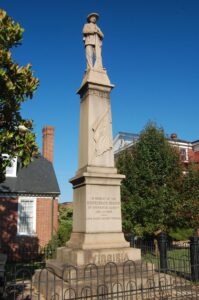 Brunswick County’s Board of Supervisors wants to take down this statue, but balked at paying $33,000. Photo credit: South Hill Enterprise

Pierce Homer knows a thing or two about construction contracting and government procurement. He is transportation director for a private engineering firm. Previously, he served as Secretary of Transportation under Governors Mark Warner and Tim Kaine. And before that, he worked for local governments in Prince William County and Galveston, Tex.  In sum, Homer has more than 30 years of experience procuring and building infrastructure in Virginia, both as a state and county official and as an employee of a private engineering firm.

He is also forthright about supporting Kim Gray, who is one of six candidates running against incumbent Levar Stoney for mayor of Richmond.

Homer has been asking some of the same questions as Bacon’s Rebellion. How is it possible that it cost the City of Richmond $1.8 million to remove four Civil War statues? That’s how much Stoney paid NAH LLC in a no-bid deal with a campaign contributor to hire an out-of-state firm, Smedley Crane & Rigging, a welder, and a consultant to remove and transport the statues of Stonewall Jackson, J.E.B. Stuart, Mathew Fontaine Maury and Jefferson Davis.

What data does Homer draw upon to reach his conclusion? Says he:

These numbers, he says, are consistent with the $20,000 it cost the City of Baltimore to remove, transport, and store four Confederate statues in 2017, and a $33,000 bid received by the Brunswick County, Va., board of supervisors to remove a statue from the county courthouse square. The Brunswick County board unanimously voted to take down the statue, according to the Brunswick Times, but balked at the $33,000 price tag, which included $26,500 for removal, $2,800 for site restoration, and $4,000 in other costs.

“If these numbers are even remotely accurate, they raise serious questions about the City procurement process,” says Homer. “These go beyond a declaration of emergency and to the City’s right to know what a procured good or service actually cost, what was the split between the general contractor and its subs, how much, if any, went to a minority firm, etc. ”

Stoney has defended the action as necessary under the conditions at the time, in which protesters in the wake of the George Floyd shooting were attempting to remove the statues themselves. In tearing down a statue in Portsmouth, a man was severely injured when the statue fell on him. Governor Ralph Northam had declared a state of emergency in Richmond, and Stoney says that he had the authority to circumvent the city’s time-consuming procurement process. The city could find no Virginia crane & rigging company to do the job, so it had to look outside the state.

(For what it’s worth, the Brunswick County bid was submitted by Clary Construction Co., Inc., a Lawrenceville, Va., construction firm.)

NAH LLC, a dummy corporation set up by Stoney contributor Devon Henry, submitted a proposal that would charge the city $180,000 per day to bring an out-of-state crew to Richmond, wait up to five days for Stoney to give the word to commence work, and then five days for the actual work. FOIA inquiries could find no indication, however, that Stoney had fulfilled the minimal requirements for an emergency procurement, which included a written justification for short-circuiting the normal procurement process.

Bacon’s Rebellion calls upon Stoney and/or Devon Henry to submit audited statements detailing how much NAH paid its subcontractors and how much the company retained in profit.

This entry was posted in Culture wars, Scandals and tagged James A. Bacon, Stoney statue contract. Bookmark the permalink.