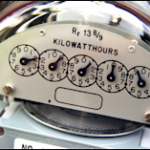 The integrated resource plan (IRP) for Dominion Energy Virginia, pending at the State Corporation Commission, involves building or rebuilding enough generation to replace most of its existing capacity.

That is one conclusion reached by the SCC staff’s own analysis of Dominion’s filed plans. A bottom line $5.6 billion estimate of the 15-year customer cost of this building spree, along with upgrades to the transmission grid, produced a banner headline story in the Richmond Times-Dispatch.

Go to the SCC website and you find the staff written testimony divided into eight documents, with a total of 422 pages, and there are additional exhibits not available to view because the company has demanded the information remain confidential. An integrated resource plan by its nature covers the entire company operation, and this review is the first since 2018 legislation changed many of the rules and produced General Assembly blessing of grid and renewable energy investments.

A summary of the overall testimony is provided by Gregory Abbott, associate deputy director of the public utility division. It was Abbott who noted that the 15 gigawatts (GW) of generation in the plan approaches the maximum demands of 16.3 GW in 2017, although summer peaks for Dominion customers have reached 18 GW. “In other words, the Company’s build plan is nearly equal to its existing coincident peak load,” Abbott testified.

Part of that is not new generation but a license extension for the existing nuclear plants accounting for 3.3 GW.  The cost of upgrading those plants to achieve that extended lifespan is substantial however and needs to be weighed against alternatives.  The actual cost is hidden by redaction.

To make room for the new, about a dozen existing plants will be retired years before the end of their useful lives, stranding about $450 million of depreciated costs on the company’s books.  Most of them burn coal, oil or wood to generate electricity, although two burn natural gas. Customers get the bill coming and going, paying for both sets of facilities – new and old. 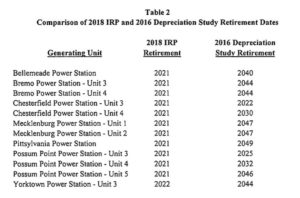 The staff testimony usually starts the debate on these cases, and other case participants will now add more to the record, all of it answered eventually by Dominion staff and its own outside experts. The two judges of the Commission (no movement on filling the third seat at the Assembly) will hold a public hearing starting September 24.

The IRP itself is just that, a plan, and only takes form as the various grid or transmission projects later come to the Commission for review. The SCC in the past has said approval of the IRP does not guarantee approval of the elements. But this IRP, more than any previous one, is going to the heart of key issues facing Virginia.

First, as noted by the newspaper article, the SCC staff is rejecting Dominion’s own internal projections for electricity demand growth. It points to data from the regional transmission organization PJM that indicates a lesser demand going forward, and if you don’t have as much demand, you don’t need all these new generation sources. If you build them and don’t need them, the cost per customer goes up.

Abbott states that PJM requires Dominion to have a generation reserve margin above its normal demand of 16%, but in recent years it has been as high as 38%.  The staff analysis projects 5 GW less demand than Dominion does by 2033.  The staff suggests the SCC use an alternate projection for all its decisions going forward.

Second, the SCC is challenging a key assumption that solar power has a 26% capacity factor in Virginia, meaning it produces power 26% of the time (versus a nuclear plant that might run 90% of the time.) Abbott and the staff note that Dominion’s existing solar panels have shown capacity under 20%, and down in (slightly sunnier) North Carolina the record is only a bit better. That capacity factor is also crucial to any cost-benefit analysis.

The still-falling cost of solar installation leads the staff to recommend a slower build plan for that resource. “Based on the Company’s 2013 IRP data and 2018 IRP data, the costs of solar have decreased substantially from 2013 to 2018. By delaying deployment of 5,000 MW of solar from 2013 to 2018, a total estimated cost savings of $10.6 billion was realized from just a five-year delay.  The percentage cost decrease exceeded the value of any investment tax credit that would have been realized,” he testified.

Third, the staff doubts that Dominion can achieve the legislative mandate of $870 million in energy efficiency program to drive down demand, especially since large industrial customers are able to opt out. Between 2009 and 2018 the SCC authorized $368 million in such programs, but Dominion spent only $199 million, “likely because of lower than projected customer participation,” Abbott wrote.

The staff also challenges Dominion’s estimates of the cost of compliance with the Regional Greenhouse Gas Initiative (RGGI) on the basis of the earlier issues, the high projected load growth and the optimistic capacity factor for solar.