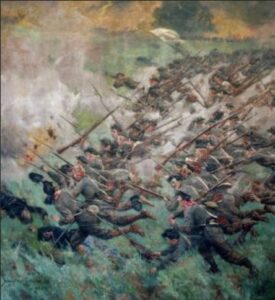 Earlier this month, the Virginia Military Institute Board of Visitors voted to “expand the symbolism” of the Virginia Mourning Her Dead statue that memorializes the 10 VMI cadets who died in the Battle of New Market to include all former cadets who have died in battle. The board also approved a motion to “devise a program of contexualization for the painting The Charge of the New Market Cadets, a 21-by-18-foot oil-on-canvas painting showing the VMI Cadet Corps advancing across a wheat field at the pivotal moment of the battle.

In 1893 VMI had requested the VMI alumnus and internationally famous sculptor Moses Ezekiel to design a memorial for the New Market cadets. It was never meant as a memorial to alumni who died since the Civil War. The painting by Benjamin W. Clinedinst, a VMI alum and member of the National Academy of Art, conveyed the traits of duty, honor, country, and selfless service by showing the Cadet Corps doing together what no one cadet could do individually.

What does it mean to “contextualize” a work of art celebrating timeless virtues? Does it not strip away the original meaning and intent? What anyone living today the right to reinterpret the intentions of the original artists?

Merriam-Webster’s defines ‘contextualize’ as a transitive verb, “to place (something, such as a word or activity) in a context.” It defines context as, “the interrelated conditions in which something exists or occurs.” What “interrelated conditions” are required to explain young boys charging directly into the face of cannon and musket fire? What additional “meaning” does a memorial to the dead need when it has been created by a person who was actually there?

Does VMI contextualize Reggie Williams’ scoring records by adding that he played for a small Division I college and not a major conference program? Does it contextualize the recent success of the VMI football team by inserting that its winning record was aided by teams that could not play due to COVID-19 issues?

By contextualizing Virginia Mourning Her Dead, the Board of Visitors assumes Ezekiel, the combat veteran cadet and artist, would find it acceptable to add other dead alumni to his monument. It is not. The mural was painted for a single purpose, to show the fear the young boys experienced when charging into battle, and to commemorate the maturation of these boys into men.

Contextualizing the monument Virginia Mourning Her Dead and mural The Charge of the Cadets at New Market desecrates the conduct of the Cadet Corps in battle, it insults the memories of those who died, and it vitiates the reasons the artists conceived, created, and presented to VMI these two great works of art. Ezekiel fought at New Market. Painter Clinedinst, a Woodstock, Va., native, would have known many Civil War veterans and heard them tell what it was like to march into a hail of musketry and cannon.

One cannot contextualize what one does not understand. A 21st century person cannot know a mid-19th century person. The nation then was a country of subsistence farmers. In the 21st century, Americans have everything in abundance. One hundred and fifty-seven years after the battle, adding plaques, markers, or reciting hundreds of names of dead alumni cheapens these artists’ great works. There can be no other context for Virginia Mourning Her Dead.

Members of the Board of Visitors are either ashamed of the Institute’s tenuous connections with the Confederacy or bowing to the will of those who are.

Despite earlier decisions to scrub Stonewall Jackson’s visage from Post, the Board of Visitors is reluctant, no doubt for sound fiscal reasons, to remove every aspect of its association with the Confederacy. Nothing is gained from eradicating every vestige or reminder that VMI, its founders and principals were Virginians. Virginia was a slave-holding state as allowed by the Constitution and U.S. law. That’s the factual truth. It’s ugly and unsavory, but it’s there. Context won’t make it more palatable.

The Board of Visitors has demonstrated its willingness to destroy things for political expediency. Preparing for the inevitability of future political cleansing, it codified the interim “Commemorations and Memorials Naming and Review committee” into the permanent “VMI Building and Naming Committee.”

Donors beware. Should you decide to give, expect a thorough background investigation, particularly if you want to have your name on a building on Post. Expect too, that the day may come when your gift will be contextualized or sand blasted away.

Jake Spivey is a VMI alumnus.