A decision by the Virginia General Assembly to fully conform state tax rules with recent changes in federal tax law could result in major increases in state corporate income tax collections, totaling an additional $1.4 billion over six years, an outside consultant has concluded.

Virginia’s corporate income tax under current rules is projected to collect $912 million in this current fiscal year, compared to $861 million last year.   The impact of conformity starts slowly, adding less than $30 million in tax during the first year.  But by the third year collections would grow 20 percent, or $182 million, and by the fifth year (2023) the extra tax of $417 million is 45 percent of the baseline for 2019.

These projections are part of the Chainbridge Software LLC analysis released by Governor Ralph Northam on August 17.  It stated the business provisions with the most significant Virginia revenue impact (listed with their six-year total tax increase) include:

On the federal side the various changes in the rules were accompanied by a drop in the tax rate from 35 to 21 percent, and these projections assume the same rules at the state level but no change in the state’s 6 percent corporate income tax rate. 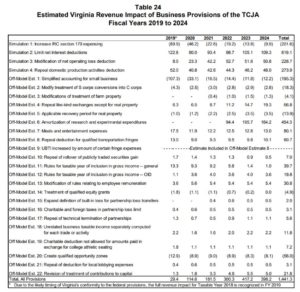 The tax conformity discussion so far has focused on the personal income tax impacts, with full conformity adding potentially $3 billion in state individual income collections over the first six years.  The state collects far more personal income tax than corporate tax, with more than $14 billion in personal taxes projected for next year, so on a percentage basis the personal tax impact is small in comparison to the business impact.

Along with the six listed above, Chainbridge estimated the positive or negative impact of sixteen additional business income tax provisions.  Many were too small for its main model and the authors added a disclaimer that Internal Revenue Service guidance on many questions is still unavailable.  The chart does illustrate the complexity of what Congress did on the business side.

One goal of the new federal rules was to encourage companies holding cash in foreign accounts to repatriate the funds to the United States, which normally would then also be taxable at the state level.  This is one area of federal tax law where Virginia has traditionally differed, allowing businesses a full deduction for foreign-sourced income.

The Chainbridge analysis assumes that deduction remains on the business tax returns, but also assumes some of those repatriated profits will be distributed and taxed as stockholder dividends.  That would add about $85 million in personal income tax collections for 2019 and 2020.  This provision has the acronym GILTI, for “global intangible low-taxed income.”

The business tax changes were at the heart of the decisions made by Congress, with the goal of stimulating investment.  The General Assembly could be concerned that such dramatic impacts on business taxes within Virginia would be detrimental to growth and question the proposal for full conformity on the corporate side or consider a corporate tax rate cut to reduce the impact.