A Horrible Abuse Case. The Daily Reality Behind It. 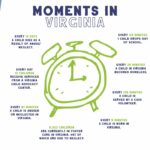 The news today is horrifying – the death, possibly from sexual abuse, of a 17-month-old. Our distracted minds are focused, for a while, and we all go into a collective shudder and wonder what monster could do such a thing.

The daily reality is worse and doesn’t get enough attention. In the fiscal year ending last June, Virginia child abuse and neglect investigations resulted in 6,485 “founded” reports. The standard for a founded report, out of the 37,000 complaints involving more than 55,000 children, is that a preponderance of the evidence supported the claim.

About 25 percent of the complaints, just under 10,000, were ruled “unfounded,” but there is a middle ground and the overtaxed child welfare system conducted more than 39,000 family assessments, often ending with referrals to services from public or private providers.

The most common problem found is physical neglect, accounting for more than half of the complaints, but there are far too many cases of real abuse (physical, sexual, mental) and even deaths. So far 28 child deaths from abuse have been counted for 2018, but it takes a while to formally classify those so many are still pending. “Founded fatalities” for 2014-2017 ranged from 46 to 52 annually. The vast majority of victims were three years old or younger. More statistics can be found on a fact sheet (here) issued by the non-profit Families Forward.(Disclaimer: I’m on its board.)

For almost 5,000 children a year, the outcome of the intervention is placement into foster care. Foster care was the subject of a critical report late last year, and a similar report may be coming on the related child protective services system. You might not know it based on what been written in recent months, but Virginia’s foster care system has some signs of success to talk about, and that was one goal of a seminar May 6 hosted by the state’s Commission on Youth.

More than 85 percent of the foster care placements during a 12-month period ending in February, or 4,013 out of 4,700, were considered family-based. Placement with a relative is usually the better outcome, assuming the relative is prepared for the responsibility. (Under new federal rules on the way, the pressure will grow for a family placement in the same community, even the same school.)

And the 820 permanent adoptions out of foster care in 2018 was a record, which the state hopes to exceed in 2019, reported Carl Ayers, Director of the Division of Family Services for the state’s Department of Social Services. He started the day with the review of the good news about the program.

Another encouraging statistic: Once placed, the children tend to stay in place, with only 17 percent in two or more settings while under care. Only a tiny number of clients go on to complain they were abused during foster care, another regular quality measure.

But Ayers was not shy about the needs. Virginia needs more parents willing to help, especially willing take in children with medical or behavioral issues. There is a frightful burnout and turnover rate among the 3,000-member front-line children’s services workforce, most employed by local service agencies.

Several of those workers took time that morning to detail the caseload, paperwork burden and emotional toll of their jobs. An information technology system purchased from Oklahoma for $1 more than 20 years ago, when clouds just meant rain and webs meant spiders, is not a boon to productivity.

The target audience for the morning-long program was a small group of legislators, many of them already proven and knowledgeable advocates. The current chair of the Commission, Del. Richard Bell, R-Staunton, is 1) a life-long educator and passionate on the issue, but 2) unfortunately, retiring from the House at the end of this term. Some of his thoughts were reported last week by Virginia Mercury.

Recent federal legislation is going to re-make the system, trying to take programs designed to react to problems and seek to make their focus prevention. The Families First Prevention Services Act, signed by President Trump in February of last year, is the first overhaul of the system in a generation. Ayers reported the state is seeking to comply by October of this year, but the law grants until 2021 for states to convert.

The state is eager to move because the new approach involves funding for many preventive services not covered by federal funding to date, including substance abuse treatment, mental health treatment and in-home parental support. The services are for the child, the parent, or the adult taking custody.

But it also imposes a requirement that those programs be certified as evidence-based, proven effective. The path to that certification is still being mapped. Not all current service providers may continue to qualify, and rebuilding that network will be a challenge.

Because of the shortage of qualified foster families willing to take the challenging cases, and sometimes to access other services, a certain percentage of children are placed in group settings. Ayers reported that the new law will make that far less common. “They basically do not want us putting any children in congregate care.”

Today’s case, today’s headline grabs our attention. The problem is deep, constant, and an unsung group of people face it every day.