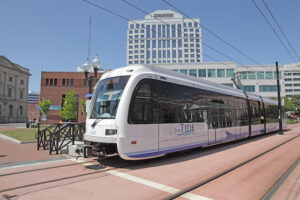 The Tide, Norfolk’s light-rail line, has been open to the public for ten years. As noted in this article in The Virginian-Pilot, it opened 18 months late after a 60% cost overrun.

The article claims the light-rail line carried its first million rides “five months ahead of original projections,” but that’s a transit agency lie. The original projections estimated that the rail line would carry 10,400 riders per weekday in its opening year. That would be about 1 million riders in less than four months. In fact, it carried less than half that, just 4,900 riders per weekday in its first year, and took eight months to reach 1 million riders.

In a typical transit-agency lie, Hampton Roads Transit later reduced that projection to 2,900 trips per weekday, and then claimed that was the “original” projection. This made it appear to anyone who didn’t look closely at the numbers that the line was doing well.

In fact, not only did it do poorly in its first year, it only went downhill from there. By 2019, seven years after it opened, ridership was down to 4,641 trips per weekday.

Despite this complete failure by every possible measure, Hampton Roads Transit wants to extend it by 2.2 miles to a local mall, which Norfolk planners want to convert — with the help of tax-increment financing and other subsidies — into a high-density, mixed-use development. Transit planners say it will take eight years to plan and build the light-rail line, which is insane in itself since they could start running a limited-stop bus there tomorrow.

One of the major problems with urban planning is that planners are unable to learn from their mistakes or the mistakes of their peers in other cities. Instead, mistakes get locked in because the few people who benefit from them form stronger lobbying groups to keep the mistakes going than are formed by the many more people who are harmed, mainly because the benefits to the few are large while the cost to the many are individually small.

Light rail was a mistake from the beginning. As I’ve repeatedly noted before, it was rendered obsolete in 1927, when the first rear-engine buses were developed that were less expensive to buy and less expensive to operate than rail transit. Buses can also move far more people per hour than rail.

Norfolk light rail is particularly pathetic. In 2019, it carried an average of 12.4 people per 68-seat railcar (that is, 12.4 passenger-miles per vehicle-revenue mile), less than any other light-rail system in the country. Fares covered less than 14% of operating costs, not the lowest but well below the 22% average for light rail nationwide. These numbers are all from before the pandemic, but as of June, 2021, ridership was still 58% less than 2019 numbers, which means trains were emptier and fares covered even less of the cost of running the Tide.

Light rail never made sense in Norfolk. As one transit enthusiast observes, even light-rail advocates admit that it requires population densities of about 30 people per acre near the rail stations. Norfolk averages just 5.

The pandemic should make it clear to anyone who didn’t believe it before: people don’t want to live in high-density, mixed-use developments, which is why cities have to subsidize them. People don’t want to travel on slow mass transit lines that don’t go where they want to go, which is why transit fares cover less than a quarter of its costs. Helping poor people, relieving congestion, and saving the planet from climate change are all worthwhile aspirations, but don’t expect obsolete forms of transportation and housing to do it for you.

Randal O’Toole is an economist with 45 years of experience critiquing public land, urban, transportation and other government plans. This column is republished with permission from his blog, The Antiplanner.

This entry was posted in Transportation and tagged Guest contributors, mass transit. Bookmark the permalink.