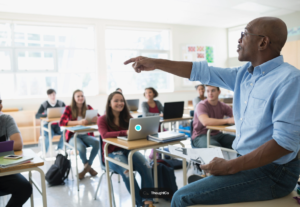 Moral panic has been defined as a:

…widespread feeling of fear, often an irrational one, that some evil person or thing threatens the values, interests, or well-being of a community or society.

Virginia’s progressive community is in moral panic over the refusal of school discipline outcomes to bend to their prescriptions for “equity.” Scientific surveys conducted by the state show teachers are scared of their students. In Virginia Beach.

To see that panic in action, read the comments on my article, “Why are Teachers Quitting? In Virginia Beach, It May Not Be “Mean Parents.”

Combative progressive comments offer a clinic on the subject.

Let’s look deeper to see sources of the progressive concerns.

Here are two of the Q and A:

Q.  Since the start of the school year, have you been concerned about your own safety because of student misbehavior? A. 38% very or somewhat concerned.”

Q. How effective do you think PBIS (Positive Behavioral Interventions and Supports (the progressive prescription for school discipline in force in Virginia Beach schools at the time of the survey and today) is in improving student behavior in your school?  A. Very effective – 10%

From those results and others I observed that progressive school disciplinary processes had not achieved their end goal of providing a safe and effective learning environment and opined that perhaps teacher fear of the students in their schools was a reason that so many of them were leaving.

Whatever was wrong with school discipline, PBIS had not fixed it.

In over 100 comments, progressives utterly dominated the conversation. Perhaps 95% of the comments were progressive objections to the article and responses by me and by Jim Bacon trying, utterly without success, to answer those objections.

The progressive commenters were desperate to claim that the survey could not be true, or professional, or replicable, or representative, or applicable to teacher resignations, or credible … or something. Anything.

The moral panic was so real you could touch it.

Background. The questions in the survey were devised by the University of Virginia School of Education for the Virginia Department of Education and are asked of teachers statewide every year.

The PBIS system of discipline implemented in Virginia Beach is one of the dogmatic holy grails of progressivism. It incorporates both multi-tiered systems of supports (MTSS) for discipline and social emotional learning (SEL). It is full of interventions and positively stated behaviors.

Good to know. But it didn’t work in Virginia Beach.

Those tiers incorporate every progressive prescription for the achievement of “equity” and the elimination of Enlightenment concepts of personal rights bringing personal responsibilities emanating from personal agency — another term for free will.

This process is called “restorative justice,” meant to banish “systemic racism” from the schools.

Restorative justice is a theory of justice that focuses on mediation and agreement rather than punishment. OK. If it works in the schools. It apparently does not.

…discrimination or unequal treatment on the basis of membership in a particular ethnic group (typically one that is a minority or marginalized), arising from systems, structures, or expectations that have become established within society or an institution.

We’d all like to banish that where it exists.

But having embedded PBIS concepts in the Code of Virginia and the Board of Education guidelines crafted by eight years of Democratic governance, Virginia progressives panic when there is evidence that they do not provide teaching and learning environments that support education.

Because progressives not only do not have a plan B, but cannot imagine one exists outside their dogma.

Incident data. In order to provide additional context for the workplace fears of Virginia Beach teachers referenced above, I offer the Virginia Beach submissions to VDOE on incidents of discipline, crime and violence (DCV) in Virginia Beach schools during the 2018-19 school year.

The Code of Virginia §22.1-279.3:1.E requires school divisions statewide to submit data annually to the Virginia Department of Education (VDOE) on incidents of discipline, crime, and violence. This report provides safety indicators for Virginia’s School Performance Report Card. These incidents shall include those that occurred on school property, on a school bus, or at a school-sponsored activity.

So, for the incident context for the fear teachers reported in the 2020 school climate survey taken starting in the fall of 2019, we will look at Virginia Beach Public Schools DCV report for 2018-19.

Perhaps the teachers who reported fear of their students were the more perceptive ones.

Did I mention that those were from a total of 82 schools? In Virginia Beach.

Other than that, nothing to see here.

The progressive press. The progressive press will avoid at any cost discussing school discipline and safety as an issue unless it reports on a school shooting.  Perhaps the most prominent regional practitioner is Hannah Natanson of The Washington Post.

Read her “‘Never seen it this bad’: America faces catastrophic teacher shortage. Her go-to sources for quotes on the reasons so many teachers are leaving? Radical teachers unions.

“The political situation in the United States, combined with legitimate aftereffects of covid, has created this shortage,” said Randi Weingarten, president of the American Federation of Teachers. “This shortage is contrived.”

Leslie Houston, president of the Fairfax Education Association, said she has never in her career seen so many teachers leaving the job because they feel disrespected, primarily by politicians and some parents.

“When people were beating up on teachers and just being real nasty about what we’re doing and what we’re not doing,” Houston said, “I don’t think they were really thinking, ‘Who will teach my children?’ ”

No evidence. Just the testimony of the saved. That’s it. That covers it. “Mean parents” are the reason for the resignations. Nothing left to say on that subject.

Natanson reflects perfectly progressive readers of this blog who cannot accept data — or talk to anyone — which/who offers another plausible, and well-documented reason, for teacher resignations.

She reports on education for a living and clearly cannot conceive of one.

This entry was posted in Discipline and disorder, Education (K-12), Media, Unions and tagged James Sherlock. Bookmark the permalink.