The traffic engineers, it appears, have won. Chesterfield County is doubling down on suburban sprawl with plans to build a series of “superstreets” at a cost of tens of millions of dollars over the next decade. While the massive infrastructure investment likely will reduce traffic accidents and improve traffic flow on the streets themselves, they will literally cement into place the county’s dysfunctional land use patterns.

This article in the Chesterfield Observer lays out the rationale behind the superstreet concept. “It provides for a high-capacity roadway, and also safety because you don’t have these intersections where [cars] cross paths in front of each other. It’s a way to eke out additional capacity without widening,” says Jesse Smith, the county’s transportation director. According to the Observer, work on the first project, on Iron Bridge Road (Route 10), will cost $64 million and is scheduled for completion in the spring of 2022.

Greater Greater Washington critiques Chesterfield’s superstreet in a recent blog post. GGW questions whether the added transportation capacity is needed, argues that the superstreet design rules walking and biking in the corridor, and contends that the money could be spent more effectively elsewhere, such as mass transit. The critique is worth a read. I agree with much of it, but differ in important respects. 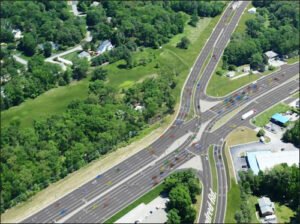 The superstreet traffic simulation, prepared by the McCormick Taylor engineering firm (see the Youtube clip above), has a certain austere beauty to it. It does appear to move cars with awesome efficiency. If the sole focus of planning is the flow of automobiles within the confines of the project itself, then superstreets are a marvelous thing. But if viewed in a larger transportation/land use context, the concept has severe drawbacks.

No walking/biking. As the GGW account notes, the superstreet designs do not accommodate pedestrians or bike riders. It’s my recollection from having driven on Iron Bridge Road a few times that the road does not accommodate  pedestrians or bikers now, so a superstreet wouldn’t make matters any worse. Let’s imagine for a moment that Chesterfield decided to add sidewalks and/or bike paths to the project. Given the scattered, low-density pattern of development along Iron Bridge, hardly anyone would use them. Here’s what GGW overlooks: To make walking/biking a viable transportation option, Chesterfield needs to change its land use to support walking and biking.

Forget mass transit. Same thing with mass transit. GGW points to the City of Richmond’s Pulse bus-rapid-transit system running down Broad Street as an example of an alternative investment that would make more sense. Bus Rapid Transit has a chance to work for Richmond (the verdict is not yet in) because development is denser, sidewalks already exist, and the city put zoning into place that allows for property owners and developers to build mixed-use projects, re-develop at higher densities, and evolve toward Walkable Urbanism. None of those conditions exist on Iron Bridge Road. At present, mass transit is a fantasy.

Killing any hope of walkable urbanism. But I agree with GGW that spending $65 million to build a 13-lane superstreet is a terrible idea. By creating an impenetrable barrier for anything but motorized vehicles, superstreets carve up the landscape and make the county more automobile-dependent than ever. Superstreets also destroy any hope that the transportation corridor, including the parcels along it, might one day evolve into a walkable urban area.

Walkable urbanism would offer at least four critical advantages to a county like Chesterfield. First, it would generate more tax revenue per acre without adding significantly to the cost of infrastructure maintenance. Second, by placing a mix of retail, office, and residential uses within close proximity, it would allow people to substitute walking trips for automobile trips, thus taking cars off the road. Third, it would improve the economics of mass transit, should that option ever be pursued. Fourth, there is a shortage of Walkable Urbanism in the metropolitan real estate marketplace. If Chesterfield wants to compete for tax-paying businesses and affluent residents, it will need to build its inventory of walkable urban places.

Here’s the rub: You can’t create walkable urbanism overnight. Chesterfield has a problem similar to that of Fairfax County. The “bones” of its transportation corridors — roads, intersections, sidewalks, drainage, curb cuts, and the like — are deeply set. They will be expensive to rebuild. Unlike Fairfax County, Chesterfield does not have a dynamically growing economy that can generate the resources needed to finance that rebuilding.

So, it won’t be easy. However, it can be done. Step one: Stop subsidizing superstreets and other sprawl-inducing transportation projects. Step two: Re-envision what the county transportation corridors — roads, infrastructure, parcels — can look like as walkable urbanism, and create a pathway for getting from A (what there is now) to B (what you want). Step three: Amend the zoning code and comprehensive plans as needed. And step four: Reallocate money from sprawl subsidies to projects that “reset the bones.” Don’t spread the investments thin so they make no notable difference. Identify the locations with the greatest potential and invest heavily there to create critical mass.

This entry was posted in Land use & development, Transportation and tagged James A. Bacon, mass transit. Bookmark the permalink.