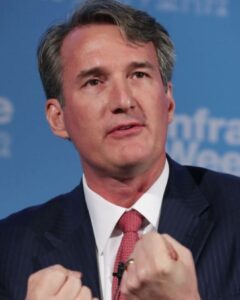 Virginia Republicans embark today upon their bizarre, COVID-safe, convention-like proceedings to select candidates for statewide office. Bruce Majors, an active Republican, writes how he has experienced the run-up to this unorthodox event. — JAB

Back in March, I listened to Virginia conservative talk radio from John Reid’s excellent morning show in Richmond to Larry O’Connor’s afternoon show in northern Virginia and D.C., and I got the impression that this Glenn Youngkin fellow was a left-“liberal” wolf in GOP sheepskin.

Coverage focused in particular on Youngkin’s donations to the Southern Poverty Law Center, which, beyond its far left politics, is charged with being a con game to enrich its founders while (paradoxically) discriminating against some of its African-American employees.

Right-of-center folk also were not so happy with Youngkin’s long career with the Carlyle Group, an investment firm usually described as a Beltway Bandit, a cog in the political class, and even as an arms merchant or a funder of arms merchants.

Back then I hoped these exposures had done in Mr. Glenn Youngkin.

At the first Pete Snyder event I attended, an outdoor BBQ in Fairfax County, I ran into an acquaintance who, like me, attended (pre-COVID) the famous D.C. Wednesday morning conservative meeting run by Grover Norquist of Americans for Tax Reform. I asked him about the other candidates in the race, and when I got to Youngkin, he said “He’s a Mitt Romney.” Given what I had already heard, I accepted this as fact.

Since then, I have attended two Snyder campaign events and two Youngkin campaign events (and also a local pro-Trump Republican event where candidate Sergio de la Pena’s son was in attendance). Since then, both Snyder and Youngkin have received major conservative endorsements. Former White House Presidential Spokesperson Sarah Huckabee Sanders — who lived in Arlington while working in the Trump White House and enrolled her three children in her local public school, Jamestown Elementary — came back to Virginia to stump for Snyder. Texas Senator Ted Cruz has campaigned across the state with Youngkin (who attended college in Texas), with better television coverage than Huckabee seems to have garnered Snyder (at least from what I saw). Cruz said he was supporting “the candidate who can win.”

A breakthrough for Youngkin among some conservative voters may have come courtesy of social media. Although he had never had a Facebook account until he opened one for his campaign, Youngkin was briefly suspended in the past 48 hours from Facebook for posting a link to a Tucker Carlson clip. If he accomplished no more during his campaign than win over all the Republican primary voters who have been censored on social media, this alone might have clinched the nomination for him.

Both Snyder and Youngkin, interestingly, have libertarian voters at their events or on their staffs. Snyder’s main campaign staffer is a veteran of Ron Paul affiliates and libertarian leaning groups like the Americans for Prosperity.  Youngkin has a young woman who I am actually used to seeing at Northern Virginia Libertarian Party happy hours. Given how much the libertarians were bashed back in 2013 for the Robert Sarvis for Governor Campaign, when Sarvis was accused of “electing” Terry McAuliffe by winning 5+% of the vote thought to have “belonged” to Ken Cuccinelli, I find it interesting that so many libertarians can be seen at each candidate’s events.

Both men also have some resources, though vastly different amounts. Snyder, the founder of angel investment firm Disrupter Capital, is a successful entrepreneur. Youngkin’s net worth is estimated more in the $250 million range, with a $17 million retirement package from the Carlyle Group alone.

Youngkin’s events have more people, and are swankier, featuring open bars and free food. His event this evening, before the party primary, featured beer and wine for adults (along with hot dogs, ice cream and nachos) but also a snow cone station for the kids. And there were pre-teen kids as well as a lot of young, attractive, even hot, people under 30 and 40. Both Snyder and Youngkin crowds feature a mix of ages and a good dose of black, Asian and Latin supporters, but the Youngkin crowds do seem to include more younger people. Youngkin’s crowds also included the only person with a nose ring (the aforementioned Libertarian Party gal), and a Realtor I recognized as a semi-regular at events of the gay GOP group, Log Cabin Republicans.

The two men give identical lists of issues: school choice, re-opening schools, telling teacher unions they can meet the same fate as the air traffic controllers under Reagan, re-opening the economy, free markets, voter integrity, respecting the police and the military, protecting the right to life.

But there is a difference.

Youngkin has more people at his events, and they include his wife, his pastor, his pastor’s family, and his children, including a tall and gorgeous son (who seemed to be working the crowd and signaling his father to stand up, speak louder, hit certain points, etc.) Youngkin’s crowds seem slightly more diverse, mainly because they are larger. Youngkin also projects what (pop) psychology currently calls “the growth mindset.” He’s sunny and upbeat, a happy warrior. He speaks of investing $400,000 in school board and other local races to counter outside dark money from George Soros and others.

Snyder is stylistically less “It’s morning in America!” than Youngkin is. An acquaintance, a Congressional staffer at a recent Youngkin event at the Fairview Park Marriott in Fairfax County, told me before the event he was leaning Snyder, but now may lean Youngkin.

So, voters will have to make up their minds: Is Youngkin’s Reaganite optimism more than a matter of style? Will he follow up with Reaganite substance?

Bruce Majors has lived in Washington, D.C., and Northern Virginia since 1980, where he is a Realtor and teacher.

This entry was posted in Elections and tagged Guest contributors. Bookmark the permalink.