Last month, Suparna Dutta spent countless hours researching how her son could safely return to school this fall as a rising sophomore at Thomas Jefferson High School for Science and Technology, a sprawling campus of classrooms, laboratories and open spaces with names like “Gandhi Commons” and “Einstein Commons,” outside the nation’s capital here off Braddock Road. Little did she know that a secretive “task force” assembled by orders of Virginia Gov. Ralph Northam was quietly meeting to discuss legislating radical changes to the school that would threaten the very future of the school.

Unbeknownst to Dutta — and me, also a TJ mother — Virginia Secretary of Education Atif Qarni, a former teacher, met remotely on Friday, July 24, with a carefully curated list of Democratic lawmakers, state education officials and others in a “Diversity/Equity/Inclusion Group” to make recommendations to the Virginia State Legislature on how to increase the number of Black, Hispanic and low-income students at the state’s 19 Governor’s Schools, specialized public school programs with admissions requirements. The group met again on Friday, July 31, and last week on Friday, August 7, and is expected to issue its recommendations in the coming days.

In its final meeting last week, the group weighed several options that would gut TJ’s merit-based, race-blind admissions process and replace it with standards that they even admitted in their private meetings would essentially be race-based. They are expected this week to issue several recommendations to the Virginia General Assembly before it convenes in special session next week, including: quotas from every middle school in the county (to boost acceptance from certain middle schools with underrepresented minorities); a second-step lottery in the admissions process; and an admissions bump for students with “socioeconomic disadvantage” (also a backdoor way to increase underrepresented minorities).

I had to go no further than the students at TJ to confirm that these solutions are shallow. My son, Shibli, observed,“These are lazy solutions to a real problem.”Class of 2019 TJ Student Government Association President Neil Kothari, now a student at the University of Virginia, penned an article earlier this summer, noting, “I see too much virtue signaling, both from TJ alumni and the broader Northern Virginia community. Everyone calls for action, but very few people are willing to put in the time or effort necessary to achieve this change.” One of those students putting in the effort is a current TJ Student Government Association leader Sean Nguyen who urges public policy makers to maintain the school’s merit-based admissions process and truly invest in programs already in place for mentoring and preparing underrepresented minorities for success at TJ. “Admissions should remain merit-based,” he said, “while we increase diversity.”

Ranked America’s No. 1 public high school earlier this year by US News and World Report, TJ, as students affectionately call their school, had come in the crosshairs of a newly-emboldened army of educational activists who spew the cult of “critical race theory” propaganda, viewing the school’s low percentage of Black, Hispanic and low-income students as evidence of “systemic racism” in the school’s admissions process. They set their sights on the school’s mostly Asian and mostly immigrant student body and vowed to change the demographics of the school.

The campaign against TJ is a cautionary tale about the Woke Army’s wider war on meritocracy. It’s also a tale of real resistance by a field army of parents, students and community allies rising up against tactics of shame and intimidation to defend their treasured school. I’m not just a journalist on this story but a concerned parent, extremely disturbed by the disdain expressed way too often and easily by the do-gooders against the inspiring collective of students and families at TJ. Earlier this year, the principal of TJ even implored our mostly immigrants of color to check their “privilege,” infuriating and saddening many parents and students.

This past weekend, we formed a new Coalition for TJ and sent Northam a petition to challenge the attack on America’s premiere high school, as not only short-sighted but also anti-Asian, anti-immigrant and ultimately anti-American. For that reason, we invite all people who care about hard work, enterprise and intellect to sign the petition. We need to send the Woke Army a clear message: we stand opposed to their vacuous attempts at virtue signaling and stand firmly for serious solutions for progress

For all of this social engineering, the governor’s office issued no press release about the launch of its “task force.” Parents and students weren’t notified. There was no teacher on the task force. And last week, when I learned about the governor’s task force on magnet schools and asked about its mission, membership, timeline and recommendations, the Virginia deputy secretary of education, Frances Bradford, mistakenly sent me an internal email asking whether they “had one of those” task forces or if it was their “COVID Ed Taskforce.” (It wasn’t.)

The next day, Qarni’s senior policy official, Tori Noles, policy advisor to the secretary of education, emailed a vague response on Friday at 5:06 p.m., providing no details on task force members, mission or discussions.

When I questioned the lack of transparency, Qarni responded, via email, that “this informal group” was “not formed via an executive order or legislative action” and, thus, “not open to the public.” He provided the names of the 26 people he’d convened for the “informal group,” and, in response to my request, his assistant sent me the meeting minutes the next Monday.

His email and the list of members can be read in this background paper, which it took our group hours to compile, researching each name because the original list was so cryptic.

The minutes from the meetings, which I’ve uploaded here, reveal disturbing, wide-ranging backroom conversations, outside the public eye, from admissions tests being “eugenically biased,” a controversial population control system, to new consideration of a failed 2018 legislative bill by Virginia Senator Scott Surovell.

“Segregate by race and income,” the minutes said. 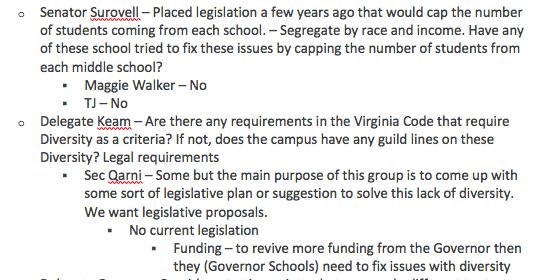 It was clear then as it is now the targets of disdain: the school’s mostly Asian and mostly immigrant families. In a video from 2018 (minute 13:40), Surovell introduced a retired Fairfax County, Va., teacher and she proceeded to disparage TJ-bound parents as “ravenous,” saying,  “The parents come here however they come here,” adding, “There are parents buying their kids a seat at TJ.”

This is a tactic of shame — particularly lethal in Asian and immigrant communities — that must be refused.

This year, at the second meeting, Surovell recommended the Governor’s School program “be ended” unless they met “certain metrics of improvement,” including race. One participant advocated first “fixing the problem,” but, at this uncertain time for youth, Surovell’s message of existential threat stokes anxiety and uncertainty.

Ironically, at the last meeting, one of the only three Asian-Americans on the task force, state delegate Mark Keam, a Korean-American, spoke about “unethical ways that people push their kids into the school” and disparaged families who were “not even going to stay in America,” claiming they were “using this to get into IV [sic] league schools and then go back to their home country.”

In the minutes, under the name of the Virginia Education Secretary Qarni, his executive assistance wrote: “Ultimate goal as a state — rezoning to address school boundaries.” At last week’s meeting, Qarni reminded the attendees “keep this work group focussed on admissions process,” with talks “later on,” discussing the improving the “pipeline.”

For Dutta and other immigrant families, TJ, with its 100 percent merit-based admissions process, represents a symbolic affirmation of America’s values of hard work, opportunity and meritocracy. That is about to be shattered, however, if short-sighted policy makers and “equity” activists have their way.

The battle over TJ reveals a wider war on meritocracy across the country, from neighboring Loudoun County, Va., to New York City, as “equity” activists exploit the tragedy of George Floyd’s May 25 killing to target educational programs and schools based on achievement, advanced academics, STEM and merit. In Loudoun County, the school board is voting today on lowering its admissions requirement of a “B” average to “C” for applicants to its prestigious Academy of Science high school. Families have a Change.org petition to oppose the effort. In Manhattan, a vocal group of activists are trying again to lobby the New York State legislature to abandon its testing requirement for its specialized schools, including Stuyvesant High School, a STEM school. Just days after Floyd’s killing, on June 2, unidentified organizers created a website, shutdownSTEM.com, to “eradicate systemic and structural racism,”  arguing that low numbers of black enrollment in STEM means that STEM programs are “racist.”

TJ got on the hit list this spring when Fairfax County Public Schools released the data for the Class of 2024 on June 1. It’s a day of joy for students that get admitted. But the “equity” activists latched onto one line in the data: in the row for the number of black students, FCPS inserted “**TS,” or “too small,” with an explanation that the number of black students was so small that officials included them in the number for multiracial students. The actual number, according to numerous sources, is six — indeed “too small,” but zero. 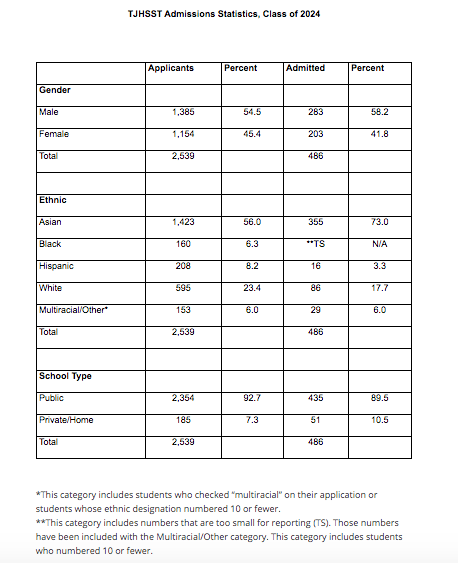 BlueVirginia, a blog for state Democrats, published the chart without the explanation below and with a false headline that “ZERO African Americans” had been granted admission to the Class of 2024. A small but vocal band of TJ alumni, called “TJ Alumni Action Group,” weaponized the false information, blasting in on social media, so that it even got picked up and tweeted out by a reporter for the Washington Post, who later wrote a lopsided article on the issue. When I pointed out the error to the reporter, she simply issued a clarification on Twitter, getting nowhere near the views of her original incorrect tweet.

Asra Q. Nomani, a former Wall Street Journal reporter, is the mother of a Thomas Jefferson High School student. This article is republished with permission from her substack.com account.