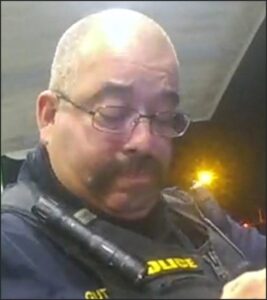 Town of Windsor police officers won’t face state criminal charges for pepper-spraying a Black Army lieutenant during a traffic stop, but they aren’t off the hook yet. Hampton Commonwealth’s Attorney Anton Bell, named as special prosecutor in the Isle of Wight case, has asked the U.S. Attorney’s Office to open a civil rights investigation.

Joe Gutierrez (no longer on the force) and Daniel Crocker pulled over 2nd Lieutenant Caron Nazario on U.S. Route 460 at night on suspicion of driving without a license plate. Nazario had a temporary New York plate in the rear window but the officers said they didn’t see it. Nazario drove a mile before finally pulling over in a BP gas station. When ordered repeatedly to get out of the car, Nazario refused. Gutierrez pepper-sprayed Nazario and then forced him to the ground. Much of the encounter was caught on police cameras.

Bell, an African-American, conducted what he described as an “exhaustive review” of Virginia state law, according to The Smithfield Times. “The traffic stop alone was not a violation of law,” he wrote. Gutierrez’s use of force “did not violate state law as he had given multiple commands for Nazario to exit the vehicle.”

Bell did ask the U.S. Attorney’s Office for the Eastern District of Virginia, however, to investigate whether Gutierrez’s actions violated Nazario’s civil rights, specifically whether they deprived him of “rights, privileges, or immunities secured or protected by the Constitution and laws of the U.S.”

According to The Smithfield Times, federal law prohibits federal, state and local officials from subjecting “any person to different punishments, pains, or penalties, than those prescribed for punishment of citizens on account of such person being an alien or by reason of his/her color or race.”

Bacon’s bottom line: Assuming The Smithfield Times‘ reporting was complete, Bell provided no evidence to suggest that either the traffic stop or pepper-spraying incident was racially motivated. Neither officer used racially-charged language. Any premise of racism would be based entirely upon the fact that Nazario was Black while the two officers were White.

Former Attorney General Mark Herring advanced the argument that Black drivers accounted for 42% of the Windsor Police Department’s traffic stops, even though Blacks account for only 22% of the county’s population. That statistical analysis was worthless, however, because it didn’t account for the number of out-of-area motorists driving on Route 460 or the possibility that Blacks and Whites might exhibit different driving behaviors. Accusing officers of civil rights offenses based upon jinky and incomplete statistics and the presumption of racism is a dangerous exercise.

This entry was posted in Civil Rights, Crime , corrections and law enforcement, Race and race relations and tagged James A. Bacon. Bookmark the permalink.