Why Teachers Are Resigning: Student Behavior 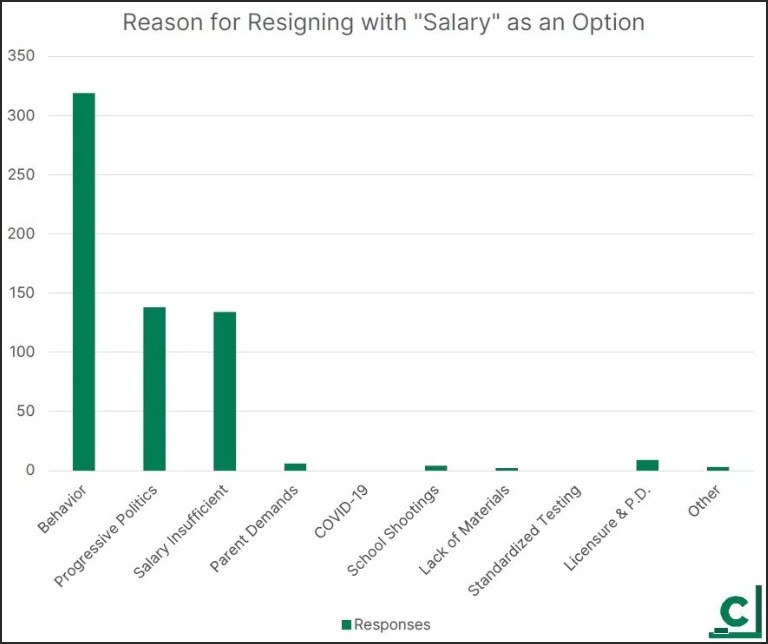 Why are so many teachers resigning from Virginia’s public schools? Based on widespread anecdotal evidence, I have suggested that the breakdown in classroom discipline is a major contributing factor, especially in high-poverty schools. But anecdotes are just that — anecdotal — and others blame low pay, COVID, or meddling right-wing parents. Now comes a survey of teachers in six Midwestern states who have resigned or will resign before the start of the 2022-23 school year. Among the 615 respondents, students’ “classroom behavior” is hands-down the biggest issue.

Key findings: “319 of the 615 responders listed student behavior as their biggest reason to leave the classroom, followed by 138 for ‘progressive political activity’ and 134 for ‘salary is insufficient.’”

The survey was conducted by the Chalkboard Review, which was founded in 2020 to provide a “heterodox outlet” for news and commentary from educators. By emphasizing diversity of opinion, it is safe to assume, “heterodox” is roughly synonymous with “non-Woke.” So, one must take into account the possible biases of those conducting the survey. (See the description of the methodology here.)

The conclusions are so astonishingly one-sided that, even though they support the Bacon’s Rebellion narrative, they warrant closer inspection. Could Chalkboard Review have polled a biased sample? Tony Kinnett, executive director of Chalkboard Review, provides this caveat:

Limiting factors via survey distribution and internal mechanisms functioned as an endeavor to keep the data safer from the taint of political advocacy—though I will admit there is no way to keep something like this sterile. Most likely, a different set of 615 qualified responders would yield a different result, therefore I only pose that this is the best data I could collect independently, at the current time.

Giving some credibility to the findings is that 58% of the respondents were members of a teacher’s union. The poll did not control for political party, however, and Kinnett says that he should have added other resignation options such as, “I’ve reached retirement age” and “inter-personal staff disagreements.” He hopes to conduct a larger, nationwide survey this fall.

There is always the possibility that the results are so lopsided because they do reflect the reality of teaching in the Age of Wokeness — as Bacon’s Rebellion has been arguing for years.

Here in Virginia, “progressives” review traditional disciplinary policies — the supposed cause of the “school to prison pipeline” — as a significant cause of racial disparities in educational outcomes. Progressives have succeeded in overhauling policies and practices regarding school discipline across the state, and their “restorative justice” approach has had years to take effect, although conclusions about its efficacy are clouded by the disruption of the COVID epidemic and a year-long shift to remote learning.

The Virginia Department of Education publishes data on disciplinary offenses and punishments in Virginia schools. But year-to-year comparisons are a problem because the institutional pressures for teachers and administrators to under-report infractions is intense. The most reliable indicator we have is the number of teacher resignations. Teachers might fudge their disciplinary reports to make administrators happy, but they don’t fake their resignations. If the responses of Midwestern school teachers are reflective of sentiments among their Virginia peers, we know exactly why schools are bleeding teachers.

What does the Virginia data say?

In October, 2021 the Northam administration conducted an extensive survey of K-12 teachers and staff on school climate and working conditions. It explored attitudes toward COVID-19, diversity, racism, and mental illness, among other issues. Overall, teachers and staff reported very positive attitudes toward their schools — 17.8% describing the atmosphere as positive, and 15.4% very positive, and more than 90% describing their school as “a good place to work and learn.”

The question logically arises: if everything was so peachy, why are teachers leaving Virginia schools in droves?

Here’s another disconnect: VDOE asked teachers if working conditions were getting better or worse.

There are some warning signs here — 18.5% of classroom instructors thought that things were getting somewhat or much worse — but there was nothing to indicate mass resignations. Conversely, 27% thought that conditions were getting better.

The survey did not query about classroom discipline in a meaningful way. When asked to rate 14 factors affecting conditions in the classroom, the VDOE survey listed “managing student behavior.” Asked to rate the factor on a 1-to-6 scale from strongly agree to strongly disagree, teachers responded with a median score of 4.7. The report is unclear about what that means. Are teachers agreeing that “managing student behavior” is an important contributor to school climate? Does it mean they are satisfied or dissatisfied with their ability to manage student behavior? As far as I can tell, the survey tells us nothing.

The teacher shortage appears to be reaching crisis proportions, and it may be the biggest challenge facing Governor Glenn Youngkin’s education team this year. To address the shortage, the governor needs to get a clear and authoritative understanding of why teachers are leaving. Conducting a comprehensive survey — and asking the right questions — is a necessary first step.