Who’s Scared of Monkeypox? Not Me. 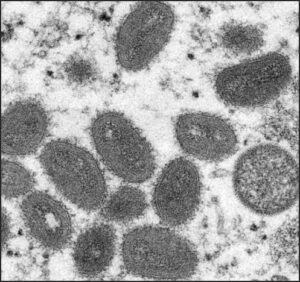 Read the increasingly hysterical stories about monkeypox and you’ll learn that public health officials are “scrambling,” “grappling” and “struggling.”

They don’t know what to do to slow the spread of this nasty, but rarely fatal disease.

The WHO has declared a public health emergency, its highest level of alert. The Biden administration may do something similar soon now that 3,591 Americans have been infected. That will supposedly free up more vaccines or something.

The fact is, these “experts” know EXACTLY what to do. They just won’t do it.

Let’s be brutally honest here. So far, the WHO says 98% of the cases are in gay men who have multiple sex partners. Often strangers. Yet the same experts keep warning the rest of us not to be complacent about monkeypox.

We’re not complacent. We just don’t engage in behavior that puts us at risk. We have more important things to worry about. Like a recession.

Here, read what NBC reported about the outbreak:

The World Health Organization recently reported that the monkeypox outbreak continues to primarily affect men who have sex with men who have reported recent sex with new or multiple partners.

This includes its finding that of the nearly three-quarters of men who provided a sexual history, the median number of sexual partners they reported during the previous three months was five, with one quarter of the men reporting 15 or more.

One quarter of those sick with monkeypox had 15 or more partners in the past three months? Is it just me or is that quite a lot of bed hopping?

During the previous month, 1 in 5 of the men reported they had taken drugs during sex, and one-third had sex at a sex-on-site venue.

Hold the phone. SEX-ON-SITE venues? I’ve never been to one of those and I bet you haven’t either, whether you’re straight or gay.

Look, having sex with multiple, random partners is dangerous no matter your sexual orientation.

Do you suppose anyone at one of these respected public health organizations has given any thought to a public health campaign promoting monogamy?

Of course not. Too preachy.

Not that public health officials balked at preaching to healthy Americans during COVID.

In fact, they seemed to enjoy it. Remember when idiot governors followed the advice of experts and ordered us to stay home? Remember how they closed our businesses, mandated we wear masks in public, stop gathering in groups larger than 10, be home by midnight and let our loved ones die alone in nursing homes?

Felt a tad preachy — not to mention, unconstitutional — to me.

All they have to do now is close sex-on-site venues and launch a sex-with-strangers-is-dangerous campaign aimed at the small segment of the gay community that engages in this risky behavior.

They won’t do it, for appearing homophobic or prudish.

And this is why public health organizations have no credibility.

This entry was posted in Public safety & health and tagged Kerry Dougherty. Bookmark the permalink.