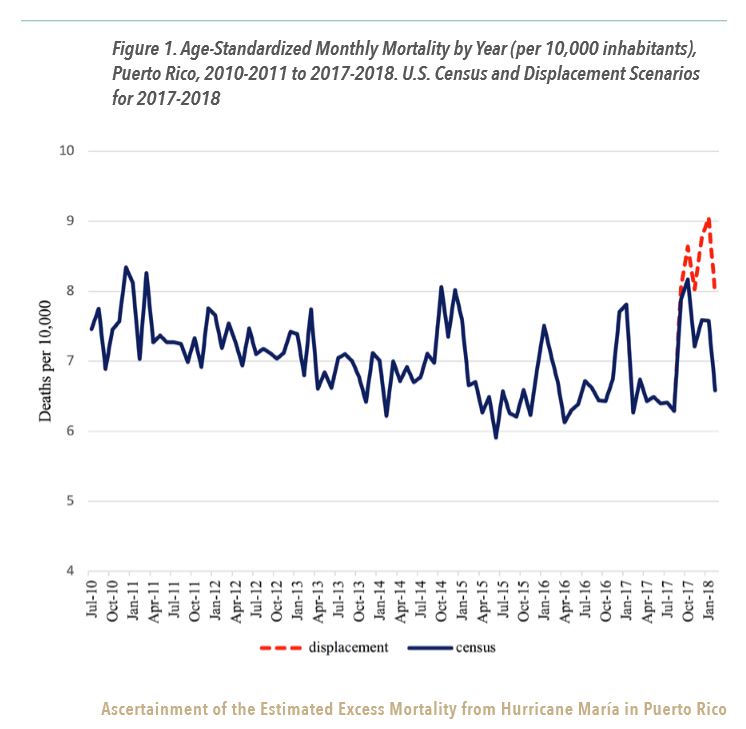 The death rate per 10,000 rises after Hurricane Maria a year ago, but more in line with historical trends before a “displacement adjustment.” Source: George Washington University

So, who were those 3,000 Puerto Ricans who died because of Hurricane Maria last year?  What killed them?  The storm down south and the controversy swirling over our illustrious President’s defensive tweet sent me searching for data.

It turns out there is no list of names.   There is no accounting of what causes of death were attributable to the aftermath of the devastating storm.  In fact, having now scanned the George Washington University report at the heart of this all, I have an itching feeling they missed a big statistical point.

The bottom line is that the researchers developed a model and made a projected estimate of the number of deaths to be expected on the island during the six months following the storm, based on previous year’s death numbers.   They then factored in the fact that a full 8 percent of the population, 280,000 people roughly, left the island following the storm.

With that population change factored in, the “expected” number of deaths was about 3,000 fewer than the 16,000 deaths which were recorded September through February.  Those 3,000 “excess” deaths above the projection are the one’s being attributed to the effects of the storm.  I’m rounding because their report admits the projection is not exact.  The chart I included above notes the higher death rate per 10,000 people.

There are not 3,000 death certificates noting hurricane-related causes (loss of electricity, stress, poor transportation response) and the authors chide the local medical community for not being sufficiently exact in filling out their death certificates.  So they are left with models and projections and estimates, which have translated into MSM-accepted Truth.

Here’s my question, the itch not addressed in the report, that I saw:   Who left?  Who departed following the storm?  Would the elderly, infirm and impoverished have been the ones to decamp to the mainland?  Or would they have been the one’s left behind?  Doesn’t the shift in the baseline also at least in part explain this?  The death rate really only jumped dramatically when you reduce the baseline population.

Had those people who left stayed, the number of deaths might have been the same (and then more in line with past history.)  Are they assuming mortality should have gone down after the migration but didn’t, and that’s a sign the storm continued to kill 500 more per month?

“We estimate that in mid-September 2017 there were 3,327,917 inhabitants and in mid-February 2018 there were 3,048,173 inhabitants of Puerto Rico, representing a population reduction by approximately 8%. We factored this into the migration “displacement scenario” and compared it with a “census scenario,” which assumed no displacement from migration in the hurricane’s aftermath. We found that, historically, mortality slowly decreased until August 2017, and that rates increased for the period of September 2017 through February 2018, with the most dramatic increase shown in the displacement scenario accounting for post-hurricane migration (emphasis added).”

No question, the number of deaths from this kind of disaster is not – and never has been – limited to the people killed at the height of the storm.  But are the numbers being fudged here just a bit?  You must consider who could and would leave and who could not, and the population left behind.  But that takes away this wonderful cudgel for beating Trump (and it’s his own damn fault for taking the bait).

Gee, if you take a population and subtract 8 percent – most of them younger, healthy and affluent – is there anyplace in the world where you would NOT see an uptick in the death rate among those left behind?  Just asking.

This entry was posted in Science & Technology, Uncategorized and tagged Stephen D. Haner. Bookmark the permalink.