What Should We Make of the Uptick in Anti-Semitic Hate Crimes? 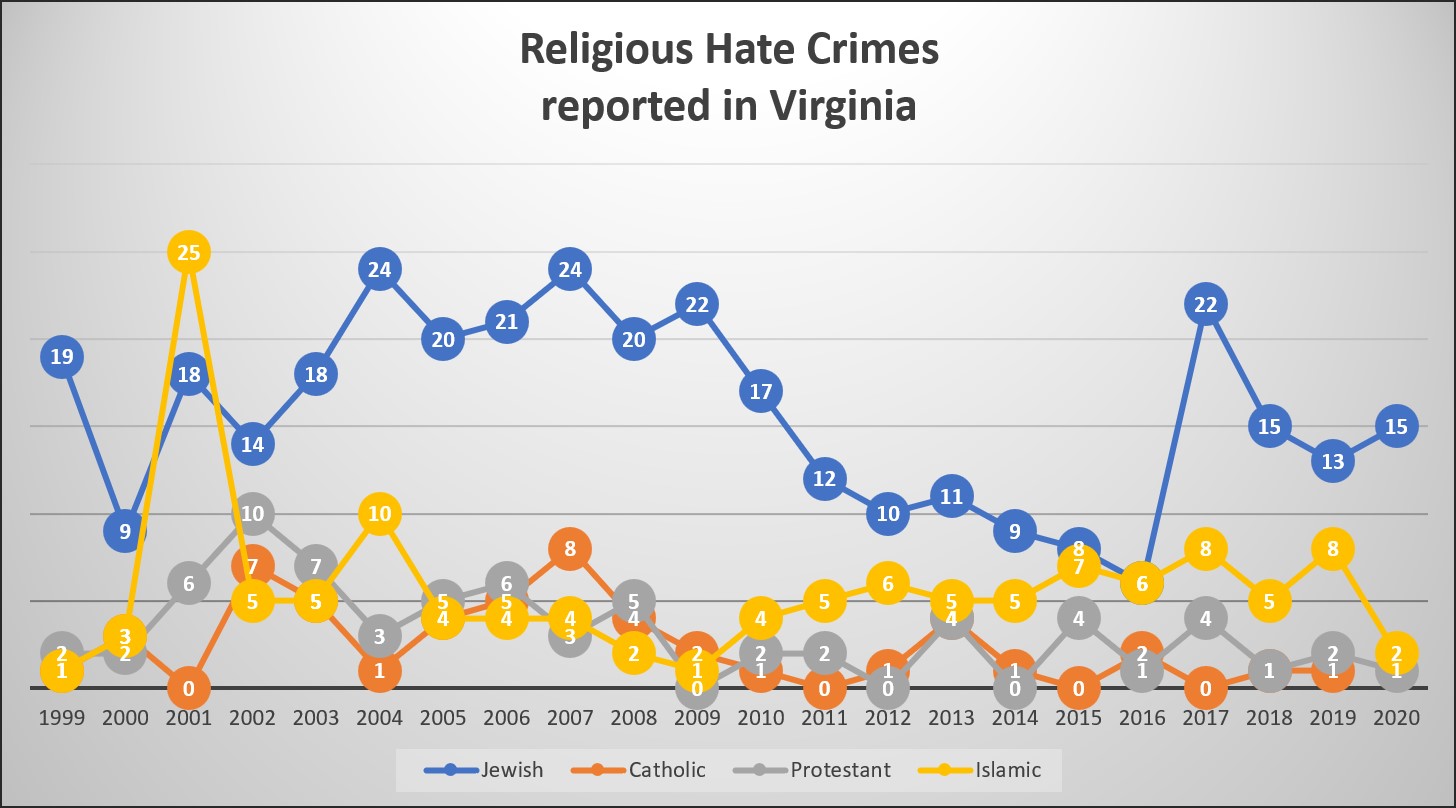 Hate crimes committed against Jews, Muslims, Catholics and Protestants. Also tracked but not included here: crimes against atheist/agnostics, multi-religions groups and “other” religions.

On his first day as Governor, Glenn Youngkin issued an executive order establishing the Commission to Combat Anti-Semitism. “Our nation and our commonwealth have seen an intolerable rise in antisemitism in recent years,” said the order. “Sadly, in 2020, Virginia experienced a record number of antisemitic incidents…. Every incident of antisemitism or Holocaust denial is an affront to our society, and will not be accepted in the Commonwealth of Virginia.”

I am in whole-hearted agreement with the sentiments behind the creation of the Commission. Although I had followed news stories of anti-Semitic incidents in other parts of the country — most recently the synagogue hostage incident in Colleyville, Texas — I was unaware of a spike in incidents here in Virginia. So, I decided to take a look at the hate crimes data in the Virginia State Police “Crime in Virginia” reports.

Some findings stand out.

First, more hate crimes are committed against Jews than against adherents of any other religion in Virginia. With the exception of the terrorist-attack year of 2001, when hate crimes against Muslims spiked, that has been true since state police began tracking hate crimes in 1999.

Second, there has been a pronounced uptick in hate crimes since 2016. But the number is not unprecedented. Contrary to the statement in the executive order, the 15 hate crimes against Jews in 2020 were fewer than the 24 crimes reported in 2007 and 20+ numbers throughout the 2000s. While 15 hate crimes are 15 too many, they compare to the 96,000 Jews estimated to live in Virginia in 2017, according to the Jewish Virtual Library — or about one hate crime per 6,400 Jews in the state.

Third, there were significantly fewer religion-based hate crimes in 2020 than there were crimes based on race/ethnicity or sexual orientation.

Thankfully, the vast majority of hate crimes committed in Virginia are non-violent. The state police don’t break down religious hate crimes by offense, but one can get a sense by looking at hate crimes as a whole. In 2020, 77 crimes consisted of vandalism, 60 of simple assault (the legal term for threatening behavior), and 36 of intimidation. Only 10 hate crimes that year were classified as aggravated assault. It cannot be told from the state police report if any of those assaults were committed against Jews. No homicides were reported.

The stated purpose of the Commission is to study anti-Semitism in the Commonwealth and propose actions to combat it. Presumably, a key objective will be to determine who is committing the hate crimes.

It would seem fair to say that the main threats to Jews in the United States come from White supremacists on the far Right and anti-Israel militants, usually Muslim, on the far Left.

The state police track the racial identity of hate-crime offenders when known. In 2020, eight perpetrators of religious-bias crimes were White, two were Black, and four were Asian. In 2019, all 17 offenders were White. In Virginia, therefore, it appears that the greatest threat of anti-Semitism emanates from Whites, who, one might conjecture, are of the White supremacist variety.

However, the Commission would be prudent to drill deeper into the data to confirm that impression. One reason is to determine how the state police make their racial classifications. If a person of Arab ethnicity commits a hate crime, is he classified as White, Black, or Asian? The Census Bureau classifies Arabs as White. Do the state police do the same?

It would be helpful to know the severity of the hate crimes. Are most perpetrators of anti-Semitic hate crimes anti-social teenagers spray-painting swastikas on synagogue doors? Obviously, vandalism is totally unacceptable behavior, but it’s a far cry from the Tree of Life synagogue mass shooting in Pittsburgh and not a cause for Virginia Jews to fear for their physical safety. Conversely, if the bulk of the anti-Semitic incidents consisted of threatening behavior and personal assaults, that would suggest that the potential for extreme violence simmers under the surface. The Commission needs to parse that data.

I have many close Jewish friends and neighbors, and I would hate for any potential threat against them to go unrecognized. On the other hand, I see nothing good coming from magnifying their fears based on non-existent threats. The Commission can do a real service by publishing a dispassionate analysis so we all have an accurate understanding of what we’re dealing with.