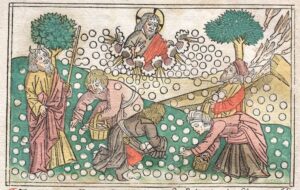 Before departing for the private sector, former Secretary of Finance Aubrey Layne outlined his thinking for the disposition of $4.3 billion in federal COVID-helicopter money: The funds are a one-time windfall. Spend them on one-time projects. Do not use the money to fund programmatic expansions that will make an ongoing claim on future tax dollars.

In recent days, the Governor’s Office has been issuing press releases on how Governor Ralph Northam proposes to allocate the manna from heaven, technically known as the American Rescue Plan. To a significant degree, the Governor is hewing to what might be called the Layne Doctrine. Here are the ten announcements he has made so far, listed in the order in which he made them:

By my reckoning, that amounts to $3.6 billion. We can expect one or two more announcements, but this list accounts for about 84% of the spending. So, let’s take a closer look.

Unemployment Insurance Trust Fund. The biggest expenditure ($936 million) will go to replenishing the Unemployment Insurance Trust Fund, which had been depleted by massive COVID-related layoffs. This is fully justifiable. Not to say that layoffs wouldn’t have occurred without government-enforced lockdown, but emergency mandates indisputably aggravated the economic downturn and slowed the recovery. Many companies were effectively compelled by government action to lay off workers, and it is manifestly unjust to replenish the trust fund by raising required contributions. Refilling the trust fund is not only the right thing to do from an ethical perspective, it will help the private sector recover and, thereby, stimulate job growth.

Broadband deployment. The second biggest allocation ($700 million) is to advance deployment of high-speed Internet access, primarily in rural areas. That represents a massive increase over the $124 million in broadband grants handed out since 2018. The press release provides few details on what criteria will be used to allocate the funds. If the past is any guide, the state will be looking for private-sector, municipal or nonprofit groups to partner with. We can expect a lot of people to cobble together a lot of proposals to grab a piece of the action, and Northam has signaled his desire to shovel money out of the door quickly. Whether the funds will be spent cost-effectively remains to be seen.

School air quality. The third biggest chunk of helicopter money ($500 million) will be used to improve ventilation and air quality in schools. Layne had suggested a go-big-or-go-home approach of addressing once and for all the problem of decrepit, aging schools, but the Governor has taken a narrow-bore approach on the grounds that better ventilation systems will do a better job of dispersing air and decreasing the risk of airborne illnesses including COVID-19. To receive funds, however, local governments will have to match the state dollars one-to-one using their own COVID helicopter dollars. The governing principle here is that local governments with skin in the game will be more judicious in the projects they push for.

Clean water. Another $412 million will be dedicated to clean water projects. This initiative distributes money as follows; $186.5 million for wastewater treatment and nutrient removal, $125 for combined sewer overflow projects in Richmond, Alexandria and Lynchburg, and $100 million to assist small and disadvantaged communities. For this analysis, I am assuming that these are one-time capital expenditures, but the press release does not say so explicitly.

Aid for towns. Team Northam wants to give Virginia’s towns $304 million to cover COVID-19 and other healthcare expenses, address economic impacts caused by the health emergency, replace lost revenue, provide premium pay for essential workers, and invest in water, sewer and broadband infrastructure. These would come from a tranche of federal funding in addition to that $6.6 in federal aid to the state, county and city governments.

Small business. This initiative will put $250 million into the existing Rebuild VA economic recovery fund, $50 million for Virginia Tourism Corporation initiatives, and $53 million for other programs such as the Industrial Revitalization Fund and the Virginia Main Street program. As long as the grants are clearly understood to be a one-time thing, this should not create new programs that turn into long-term spending constituencies.

Public safety. The $114 million that Northam proposes to boost public safety contains some elements that could increase pressure for ongoing spending. Eleven million dollars goes to “address critical staff shortages at local and regional jails and sheriffs departments,” including medical contractors, cafeteria and janitorial workers and other support staff. Another $62 million will go towards “hazard pay” for public safety officials, which Northam touts as a way to recruit and retain law enforcement. That sounds like an ongoing commitment. Personally, I support the higher pay, but let’s be honest about what this is — using one-time helicopter dollars to fund an ongoing increase in compensation.

Financial aid. This proposal would designate $111 million to financial aid for low- and moderate-income undergraduate students at public and private colleges, which will supplement another $833 million made available through the Higher Education Emergency Relief Fund III. This is a programmatic expansion pure and simple. Once put into place, any reductions in future years will be criticized as “cuts” to financial aid programs. Another drawback is that the open-ended subsidy for lower-income students makes it easier for colleges and universities to increase their charges with impunity. This is as much a subsidy of the higher-ed status quo as it is of lower-income students.

Behavioral health. This initiative will commit $331 million in federal  funding to bolster Virginia’s behavioral health system, including targeted investments to “alleviate pressure on state mental health hospitals, strengthen community-based services, and increase support for substance abuse and prevention programs.” The press release states explicitly that the plan solidifies the Commonwealth’s “ongoing commitment” to increasing access to community-based services. It includes $200 million for staffing at state facilities, and $45 million for staff bonuses. The state will commit another $154 million in state dollars for salary adjustments in the next two-year budget.

All things considered, it could be worse. There’s nothing for taxpayers, of course, but ongoing tax relief should come from ongoing tax revenues… which shouldn’t be a problem with Virginia’s massive budget surplus this year. Maybe $500 million or so will go to ongoing salaries and programs, which will become embedded in future budgets. That ain’t chump change. But given the political complexion of Richmond these days, I thank myself for small favors.

Likewise, when you’re doling out billions of dollars in “free” money, this is not a bad list of priorities. I could quibble with a lot of details, but all the problems Northam is trying to address are real.