McAuliffe Comes for Your Children 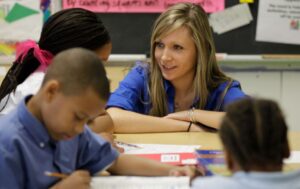 There are a number of funny things about this desperate last-minute messaging.

One wonders if Terry McAuliffe knows who these non-white Virginia students are. If you visit Virginia schools you will discover many schools with nary an African-American student. I’ve taught as a substitute in about two dozen public schools throughout Falls Church and Arlington County (adjacent to Fairfax and Loudoun Counties which are so much in the news today). At Hoffman-Boston Elementary, a school near the Pentagon that was historically an African- American school before desegregation, I had a 3rd-grade class with one student each from Chechnya, Saudi Arabia, the Dominican Republic, and China, and four from Mongolia. (There is a Mongolian immigrant community in south Arlington.) At Arlington Science Focus, a magnet school near the upscale Cherrydale neighborhood, the student body is majority non-white, with many Asian, North African, and Middle Eastern students, often immigrants. In Falls Church schools I would sometimes look out over a recess playground and realize that the second biggest demographic group, after white kids, were Sikhs.

What race of teacher would best “represent” in those classes?

A second funny thing about McAullife’s desperate message is something rarely discussed: 50% of public school students are boys. What percentage of public school teachers are male? Why not a commitment to increase the number of males teaching in schools? What problems are caused by boys and girls mainly experiencing women as authority figures for 12 years?

A third, and perhaps the funniest thing about McAuliffe’s sudden concern is: Who has been running things for the past few decades? Virginia has had only Democrats elected to any statewide offices since 2009. Several of the white Democrats running Virginia have been discovered to have worn black face and Klan robes, as a joke of course, in college, and the Black Democrat serving statewide in Virginia, Lieutenant Governor Justin Fairfax, has been credibly accused of sexual assault by two (African American) women. Terry McAuliffe has already been a governor of Virginia. Among all these racial hijinks, when did je , or any other Virginia Democrat, propose, say, student loans or grants at historically black colleges for students to get education degrees that would be forgiven if they spent time teaching in Virginia public schools?

But the fourth, and most deadly serious thing about McAuliffe’s Hail Mary, is that the Democrats finally realized that the issue they are losing on is education. But what they are really losing on is the issue of children.

For the past two years Democrats have been imposing fascism on the country much more rapidly than they have ever been able to do in peace time before, because of COVID. They’ve closed churches and businesses and schools, forced people to wear a silly mask that does little to prevent transmission, have coordinated with big tech monopolies to censor news, have ordered people to give up their bodily autonomy not if they want to visit someone in a hospital or nursing home but if they want to keep their job or insurance. They have changed or overlooked voter integrity laws so that they can print, mail out, and then collect and fraudulently fill out ballots, especially in any swing district. After destroying the economy with lockdowns they hope to make Americans dependent on government for income so that they will always vote for the party of government (in case they can’t import enough foreigners to displace American citizens to ensure their hold on power).

Too many Americans just sat there and took this.

But then Democrats came for their children.

Now it’s not the first time. Democrats have been having their way with interns for some time, but interns are usually at least young women in their early twenties. Instead, Democrats decided they would teach pre-teen children new lessons: that America is evil, that they should hate themselves or their classmates because of their race. They also let parents hear this, since they decided to make education virtual during COVID, as part of the hoax that COVID required shutting down the market economy (even though kids don’t get or transmit the virus). As parents began to pay more attention, they discovered that besides “critical race theory,” neo-Marxist agitprop kids were being exposed to pornographic and pedophilic images and literature. And then we learned that there were rapes in the schools, rapes being covered up by school boards, because punishing the rapist and discussing how the rapist gained access to young girls would endanger Democrat social engineering, in this case so called “transgender” policies.

In being exposed as parasites who profit off of failing public schools while having no concern for children, Democrats exposed themselves as regressives not “progressives,” willing to return the America they wished to destroy to pre-modern times. Terry McAuliffe declared that parents have no right to control their children’s education. Because parents do not own their children! Children belong to the state. The state will feed them whatever unappetizing and unwanted (and unconsumed) feed it wishes — says Michelle Obama. The state will jab your children with barely studied shots that may cause myocarditis — says Joe Biden. The state will raise your children — says Hillary Clinton, the wannabe ruler of the village. The state may not itself rape your daughter, as feudal lords did in the “right of the first night” (droit du seigneur) they claimed to sample the virgin daughters of their serfs, but if their policies lead to rapes, well, that’s an acceptable cost. Like taxes. It’s almost as if the shadowy QAnon figures the Democrats keep attacking were right!

McAuliffe’s original campaign theme was that Glenn Youngkin was Trump. (Since it came out that McAuliffe had invested the wealth he accumulated from pay for play grifting in the Carlyle Group, the hedge fund Youngkin helped manage, someone should check and see if McAuliffe also owned shares in Trump hotels.)

Virginia is one of the most government-dependent states in the U.S., ranking near the top of the list for employment in government and government- contracting firms. Part of this is because the Pentagon and the military bases in Norfolk, but even more is because of the overpaid federal bureaucrats, lawyers, consultants and contractors, who live off of the taxes of all Americans elsewhere, in Loudoun, Arlington and Fairfax Counties, and in Alexandria, which are among the 10 wealthiest counties in America. Democrat politicians, campaign managers and media spinners — Jen Psaki, Paul Begala, Chuck Todd, Eugene Robinson — often live in multi-million dollar homes in wealthy (and incidentally lily white) zip codes in these counties.

What Trump — and Youngkin — represent is a threat to this ruling class. This is an ancient historical pattern, that didn’t just begin with the American Revolution or the Magna Carta. European history (and there is no reason to believe this didn’t happen on other continents) is a history of taxpayers being treated like livestock by the government and ruling class, until the oppression becomes so extreme there is a revolution, like the Peasant’s Revolt of 1381. The ruling class and its deprivations — taxes, rapes, conscription — are beaten back for a century or so, until they add new regulations and taxes and must be beaten back again.

Trump was a threat to the ruling class coastal elites with his seemingly erratic statements about reducing the surveillance state (the “intelligence community”) or the military empire. And the empire — a good slice of which lives in northern Virginia — struck back.

Youngkin cannot affect these ruling class minions living off the federal deep state. But he does threaten their funders and allies in government-sector unions with his talk of expanding charter schools and other forms of education choice.

The problem for the establishment Democrats is that in their pre-modern drive to return to a time when children were the property of the government and the ruling class, they have threatened the children of their own minions, the minions who have made northern Virginia first purple and now blue. The long Democrat excusing of rape and abuse of children, as long as the perp — Teddy Kennedy, Bill Clinton, Andrew Cuomo, Justin Fairfax- – supports “abortion” or “transgender rights” may have done them in.

Bruce Majors has written for The Hill, the Los Angeles Times, Reason, and other publications. He writes a Substack column, The Insurrection.

This entry was posted in Education (K-12), Elections and tagged Bruce Majors. Bookmark the permalink.