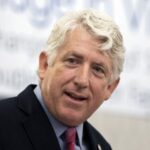 Attorney General Mark Herring wound up his last day in office today with an announcement that he is holding three more gas stations “accountable” for alleged price gouging during the Colonial Pipeline emergency in the spring of 2021, bringing the total to six enforcement actions.

As I noted in a previous post, it seemed to be a curious coincidence that of the  4,000 or so gas stations in Virginia (a decade-old figure), the three that had been charged in November for jacking up prices during the gasoline shortage stemming from the Colonial Pipeline shutdown all had Asian proprietors. It turns out that the latest three enforcement actions target Asian proprietors, too. Here’s the list of all six (business name — proprietor name):

No other gas stations owners have been fined for the Colonial Pipeline crisis. Not. One. White. Gas. Station. Owner.

There are two ways to look at this anomaly.

Here is the first: there are some 4,000 gas station owners in Virginia. Herring’s enforcement actions clearly had a “disparate impact” against small business owners of Asian extraction. A disparate impact of this magnitude suggests that Herring and/or his minions might have singled out Asian proprietors in a discriminatory manner. If conscious discrimination cannot be proven, the lopsided nature of the statistics demonstrates “institutional racism.” Judging by its impact, the price-gouging law itself is racist, regardless of its legislative intent.

If we accept the logic of “disparate impact” and “structural racism,” then the price-gouging law should be repealed and Herring admonished for his relentless, racist persecution of Asian businessmen.

By way of explanation, one might conjecture that Asian immigrants come from commercial cultures that differ from that of the United States. Perhaps they bring with them the ethic of the souk or bazaar, in which the American idea of “fair” prices does not exist. Prices are set by negotiation and haggling, and merchants take full advantage of scarcity in order to raise prices and increase profits when they can. The American idea of “price gouging” is alien to them, and when the opportunity arises, some Asian immigrants raise prices because they can.

By the “disparate impact” logic that Herring and his ideological soul mates apply in other contexts, usually involving African Americans, Herring’s enforcement actions are racist. He is enforcing a law that “criminalizes” deviation from White cultural values embedded in the price-gouging law.

To be clear, I personally regard “disparate impact” as a fraudulent concept that invites zealots to cherry-pick data in search of racism where it doesn’t really exist. But the notion of “disparate impact” is not a legal standard that Herring can apply willy-nilly when it suits him and ignore when it doesn’t. He should be judged by his own standard, and by that standard, he’s a racist.

This entry was posted in Consumer protection, Crime , corrections and law enforcement and tagged James A. Bacon. Bookmark the permalink.