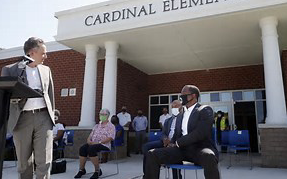 Richmond Mayor Stoney tweeted today urging the school board not to fire Superintendent Jason Kamras at the emergency board meeting tomorrow night.

Which means, of course, that they plan to fire him.

If they do, it will not be because of the terrible SOL scores.

It will be because the Richmond teachers most influential with the school board and thus the school board itself have been gunning for him for at least 18 months for floating a proposal to help avoid low SOL scores.

That proposal would have asked some teachers to work longer last school year to help the children most challenged by the 18-month COVID break. The longest-in-the-state 18-month break that the teachers had insisted on and gotten.

The proposal would have paid them more to provide the extra help. For which federal money was available.

The school board shot down that proposal. At the behest of the teachers. Who now want him fired.

I have been observing and writing about the City of Richmond Public Schools for several years.

My point of view has always been the interests of the children.

I have generally focused my attention on school performance and on the school board, which means the teachers, to whose interests the school board is in thrall. Only sometimes on Mr. Kamras.

The meeting tomorrow is for two reasons:

I recommended year-round schooling for the 2021-22 school year on December 18, 2020. Governor Northam cautiously endorsed that same concept in a news conference on Jan. 6, 2021.

The teachers and their mouthpieces on the school board shot it down.

The teachers went gunning for him immediately and tried very late in the contract process to keep his contract from being extended in February of that same year, but he got a new four-year contract. (I hope he had a good lawyer for the contract. It appears he may exercise the buy-out provision.)

Now the school board apparently wants to fire him. For low SOL scores in the last school year. The one they would not extend at his request to make up for COVID learning losses.

Mr. Kamras has done a lot of things with which I strongly disagreed.

There’s more, but you get the idea.

But I supported him when he foolishly thought it was progressive to keep the kids in school to overcome COVID learning losses. The most influential Richmond teachers were not amused. That translated, as it always does, into the school board denying his proposal.

As for the presumed firing, they have made him suffer first. As the Richmond Times-Dispatch noted this afternoon:

Since May, two of Kamras’ Cabinet members have resigned, the chief operating officer and the chief academic officer.

In February, five school board members looked to eliminate the district’s chief operating officer and the chief wellness officer from the upcoming budget.

The following month, in a deadlocked vote, the board barred Karmas from filling the chief wellness officer position.

That is how it works in too many of Virginia’s cities.

See Charlottesville for the playbook.