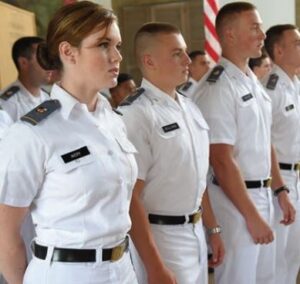 Charlie Beckett of the London School of Economics addressed journalism’s turn to emotionalism in a talk given at the 2015 Science Festival in Bradford, West Yorkshire, England (“How journalism is turning emotional and what that might mean for news.”) He stated, “the value of objective journalism is the idea that journalism can attempt to give an account that is balanced, fact-based and that gives a fair summary not just of what has happened but the context around it without the distortion of the journalist’s own feelings.”

Beckett acknowledged there is a place for tempered emotion. He said, “Making a drama of a crisis has always been part of mass media. The theatre of news is as old as broadcast journalism. … If news does not get your attention, if you do not find it interesting, amusing, frightening or uplifting than you are less likely to take notice.”

The balance of emotion and objectivity “can only be an aspiration,” he conceded. “All journalists are human and have different factors that shape their worldview and their understanding of particular circumstances. … By selecting a story for reporting you have made a choice. The facts that you omit, as well as those you include, are selective.”

To validate Beckett’s opinion, we need look no further than the media’s recent treatment of the Virginia Military Institute where the omission of relevant facts has colored the coverage.

Leveraging passionate post-George Floyd outrage against hollow allegations of “veneration of the Confederacy,” The Roanoke Times, Richmond Times- Dispatch, and particularly The Washington Post have devoted much time and energy to allegations of entrenched racism at VMI since its admission of Black cadets in 1968, and embedded misogyny since accepting women twenty-five years ago.

Profuse use of verbiage such as “enslaver,” “lynching,” “under fire,” and “resistance” telegraphed Washington Post reporter Ian Shapira’s intent to energize emotions and outrage. But this language, along with carefully parsed interview quotes and extracts from anonymous social media platforms (e.g., Jodel, StupidChat, Clandesto) told an incomplete story.

Shapira and other purveyors of these highly charged articles omitted a trove of known, trusted, respected, and readily accessible data. For example:

Data from the FBI and Department of Education is synthesized below.

The last hate crime reported at VMI was in 2013. The average number of hate crimes per 1,000 students over the ten-year period was .06 — comparable to Christopher Newport University and less than Longwood University and the College of William & Mary. When was the last time you read a Washington Post hit piece or a state-funded investigation into racism at one of those other institutions?

You didn’t because there were none.

This chart shows the incidence of crimes reportable under the Violence Against Women Act. 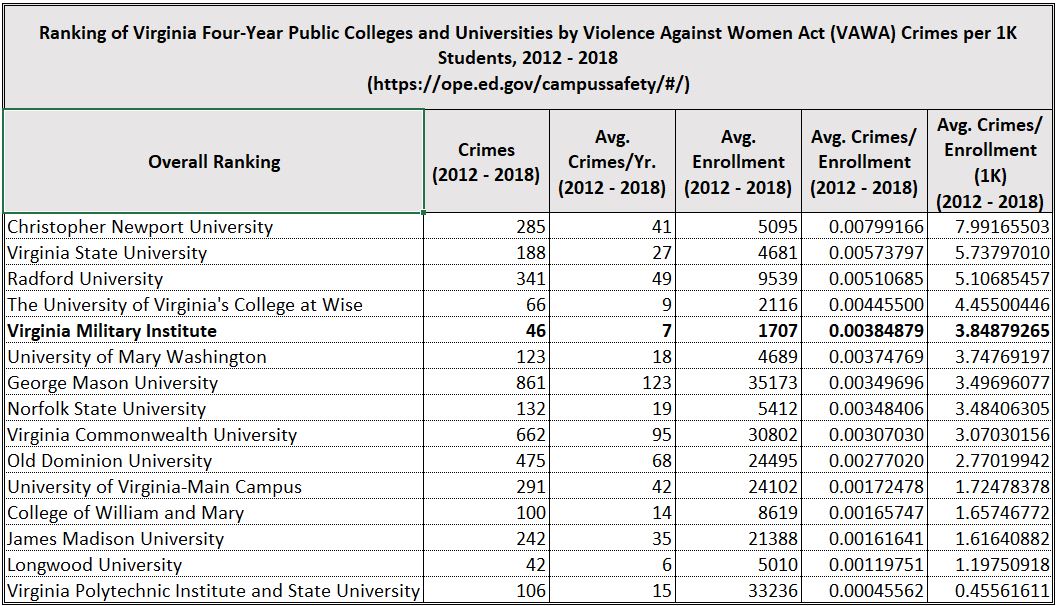 Ranking of Virginia Four-Year Public Universities by crime per 1K students under the Violence Against Women Act. (Click for more legible image)

While hardly stellar, VMI ranked fifth among Virginia’s public four-year institutions behind Christopher Newport, Virginia State, Radford University and the University of Virginia’s College at Wise, and was comparable to that of Mary Washington University.

Not found in this composite portrait is the fact that violence-against-women allegations at VMI have declined markedly in the most recent six years as an outgrowth of initiatives undertaken there. If you don’t remember reading about those initiatives, it’s because no one wrote about them either.

There is still work to be done. VMI and Virginia’s other fourteen state-supported colleges and universities must diligently and even-handedly address all race and sex inequities.

But, as Beckett states, wrapping journalism in a warm cocoon of emotion relegates objective, balanced, and fact-based journalism to a “…filter bubble – an echo chamber … responding to emotional triggers that please us – hearing only views that support our views and confirm our prejudices.”

Genuine change comes neither through the pedantic tedium of cold, raw data nor the fiery glare of blind emotion. Change requires measured, quantifiable, and agenda-less symmetry built on reasoned emotion and known, trusted, and respected data. Sadly, the citizens of Virginia have yet to see this from The Roanoke Times, Richmond Times-Dispatch, and The Washington Post. We deserve better.

Lawrence E. Houseworth is a proud member of the VMI Class of 1972, the first class to admit African-American cadets. He graduated from the Virginia Military Institute with a B.A. in English and a six-year commission in the Army Air Defense Artillery. After five years in sales and a 30-year career in the defense industry, he retired with wife Marie in Richmond.