Virginia’s Positive Behavioral Interventions and Supports (PBIS) for School Discipline – How is it Going?

The means that Virginia has chosen to maintain classroom discipline, called Positive Behavioral Interventions and Supports (PBIS), is controversial.

That controversy exists within the federal Department of Education (DOEd).

That organization’s Office of Civil Rights (OCR) has claimed for years that traditional methods of discipline are racist in outcomes and thus violate civil rights laws.

Well, last I looked, PBIS has disparate outcomes in Virginia.

Fairfax County Public Schools is the king of PBIS implementation in Virginia and has been for years. 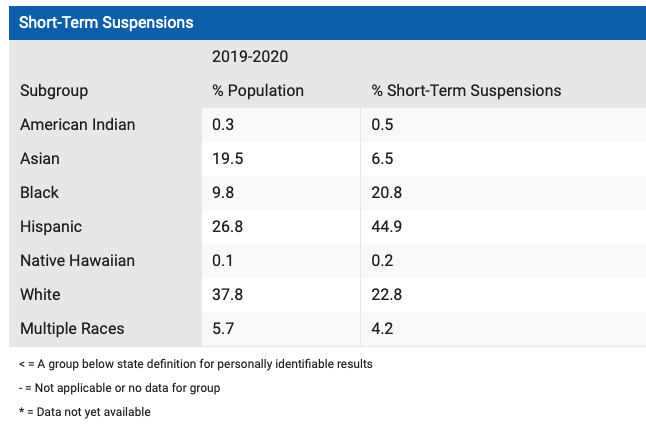 Albemarle County Public Schools labels itself “the most antiracist school division in Virginia.” 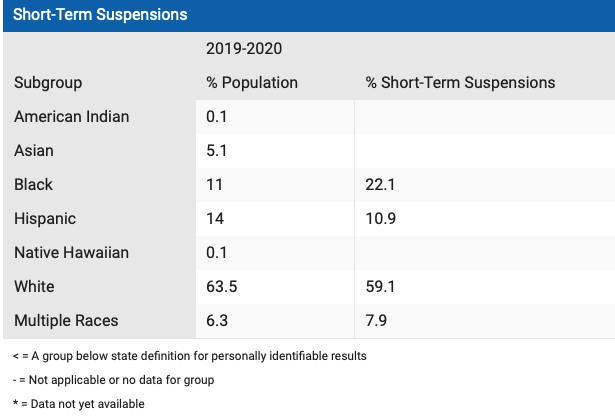 Other experts argue that education policy is a matter for the states and that it is a bridge too far to insist that federal civil rights laws are violated by school discipline systems that have disparate outcomes.

The implementation and outcomes of PBIS really matter. The teaching of PBIS in education schools is the law in Virginia since 2020.

We know from a DOEd Institute for Educational Sciences (IES) project just reported that implementation is very hard and not sticky without a lot of continuing support.

We do not know the quality of the implementation in Virginia and we remain unable to measure the results in classrooms.

Other than that, we are on track.

Glossary. The education community has a fetish for renaming things. This is one of those instances.

It had been shelved by the Trump administration.

The Trump administration withdrew the 2014 Dear Colleague Letter in December 2018. The letter announcing the rescission declared: “States and local school districts play a primary role in establishing educational policy, including how to handle specific instances of student misconduct and discipline, and in ensuring that classroom teachers have the support they need to implement appropriate discipline policies.”

In other words, not federal business.

OCR has never wavered in its support for PBIS. They claim in both DCLs that PBIS or something like it is demanded by federal law.

Other observers strongly disagree. Safe and Orderly Schools: Updated Guidance on School Discipline by the Manhattan Institute is worth a read. It succinctly stated the conservative case against the Obama DCL.

Virginia. Virginia Tiered System of Supports (VTSS) was originally launched in 2007 to encourage the practices originally developed for special education -– Response to Interventions (RtI) –- to be applied to general education populations.

A five-year pilot program for VTSS measured support to academic progress, not its effects on student behavior.

Virginia adopted PBIS training in ed schools by law during the Democratic interregnum. Now VTSS Research and Implementation Center (VTSS-RIC) and the VDOE’s Training and Technical Assistance Centers (T/TACs) provide “professional learning and on-site coaching to participating school divisions,” of which there are 54.

Positive Behavioral Interventions and Supports (PBIS) is a nationally-recognized approach to support positive academic and behavioral outcomes for all students. In Virginia schools, PBIS is the behavioral component of the Virginia Tiered Systems of Supports (VTSS).

“Positive academic and behavioral and outcomes for all students.” According to the latest report from the Department of Education, PBIS does no such thing.

Virginia has just posted the 2021-22 academic results from its schools. A lot of those results were disappointing, even considering the effects of COVID.

We await the Discipline, Crime and Violence (DCV) statistics for that same year to assess how PBIS has done in maintaining discipline. We have a built in control group.

By subtraction from the VDOE accounting above, 78 Virginia school divisions have not adopted PBIS.

The IES project. DOEd’s Institute of Education Science (IES) conducted an extensive project with 89 schools in six states over two years to assess tiered systems of supports for academics and discipline.

It reported in July. The results were decidedly mixed.

Implementation. A panel of experts selected the Center for Social Behavior Support (CSBS) and the study team helped districts and schools get ready to implement the program and then over two years CSBS provided technical assistance and more than 60 hours of training for each district coach and school behavior team.

Findings. IES findings published in July were mixed. All of the findings are quoted directly from the study.

The Program was no better than schools’ usual strategy for students overall.

But the program did have both behavioral and academic benefits for students initially identified as struggling with behavior.

Generally, good implementation led to improvements in some aspects of school climate and classrooms but did not seem to be sufficient to produce impacts on students overall.

In particular, program developers and schools might want to consider these key aspects of the approach:

Experimentation with and studying different strategies are critical to expanding the evidence base.

Different sides in the debate will highlight the parts of those findings that support their positions. Neither will deny that when the intense focus on PBIS in this project was removed, the effects went away.

Virginia Implementation quality is unknown. Virginia has tried to replicate at some level the training provided in the IES trial.

In collaboration with the VTSS Research and Implementation Center (VTSS-RIC) and the VDOE’s Training and Technical Assistance Centers (T/TACs), VTSS provides professional learning and on-site coaching to participating school divisions

I doubt any of that replicates the “technical assistance and more than 60 hours of training for each district coach and school behavior team” provided in the IES field test program. So do you.

Yet the report of that pilot said that with all of that instruction and support during two years, MTSS and its component PBIS were “carried out reasonably well in most participating schools.”

So, there is an issue of implementation in Virginia. It’s hard to do. We simply don’t know the answer to implementation quality which will vary school to school.

“to provide district, regional and state leadership with a regular measure of the capacity for implementation and sustainment of Effective Innovations in districts.”

Tools useful for measuring success of PBIS implementation in schools.

If any Virginia school division uses ASSIST, CLASS or ST-CIO, I cannot find reference to it. I hope someone will point me to the regular use of one or more of them in Virginia schools.

But, generally, we don’t know about Virginia implementation quality or differential results among strategies.

“Schools need not choose between keeping their school community — including students and school staff — safe or complying with the law.”

The Biden Department of Education Civil Rights Division interpretation of the application of civil rights laws in this instance is disputed.

PBIS has been implemented in Virginia with an emphasis on reducing racial disparities in disciplinary outcomes. It would be impossible for schools not to take notice.

We await Virginia 2021-22 school year discipline, crime and violence (DCV) statistics to find out what we can about the success of PBIS in Virginia in this past school year, either in controlling the safety and order in the schools or eliminating racial disparities in discipline.

As for the supposed “false choice” between PBIS and school safety, we’ll see.

This entry was posted in Discipline and disorder, Education (K-12) and tagged James Sherlock. Bookmark the permalink.