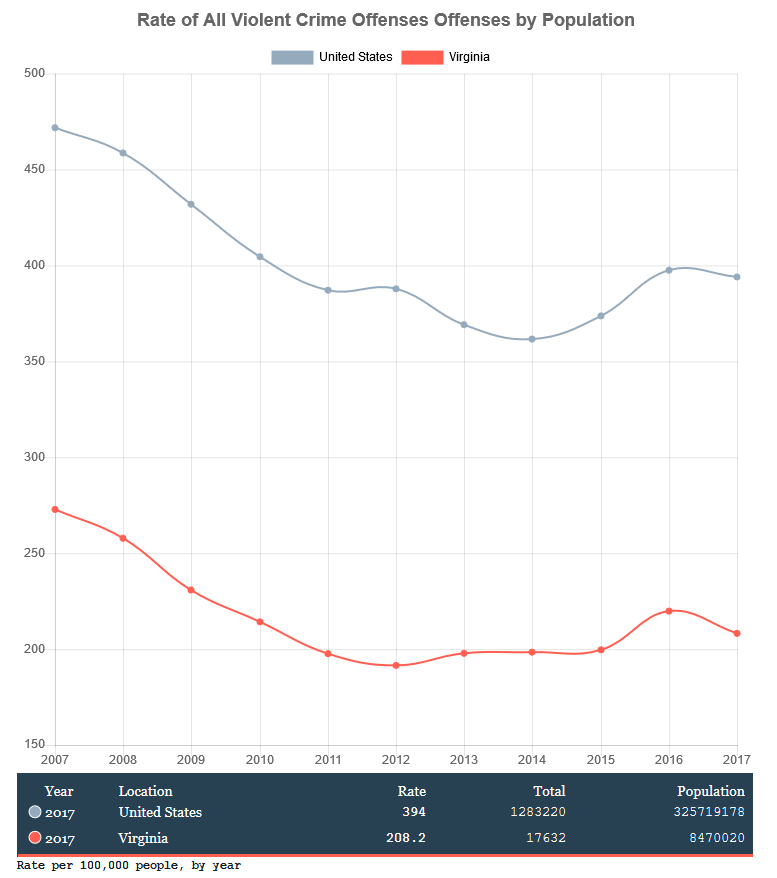 One of the advantages of living in Virginia is that citizens are less likely than other Americans on average to become crime victims. The rate of violent crimes (seen above ) is about half the national average, according to data published today on the StatChat blog based on 2017 FBI crime data. The rate for property crimes is only three-quarters of the national average. That’s pretty impressive considering that Virginia’s demographics come pretty close to matching the national profile. The Old Dominion is doing something right.

Not that you’d know it by reading Charlottesville’s Daily Progress today.

The newspaper built an article around the fact that African-Americans comprised 54.3% of all arrests between March 30, 2014, and March 28, 2019, compared to their population percentage of only 19%.

That ratio may change, the newspaper said hopefully, thanks to the law enacted by the General Assembly this session that will end the state’s practice of suspending driver’s licenses for unpaid court fines and fees. “It does affect more people who are black and brown, particularly low income, because they don’t have the money to pay those fees,” said Harold Folley, a community organizer for the Legal Aid Justice Center.

I wouldn’t expect professional grievance mongers like Folley to refer to the FBI crime victimization data — after all, what purpose use would there be for community organizers if there isn’t systemic racism to fight? But I would expect reporters or editors to make such a check.

The statewide trend over the past 10 years has been, until about 2015, for fewer white and black crime victims. 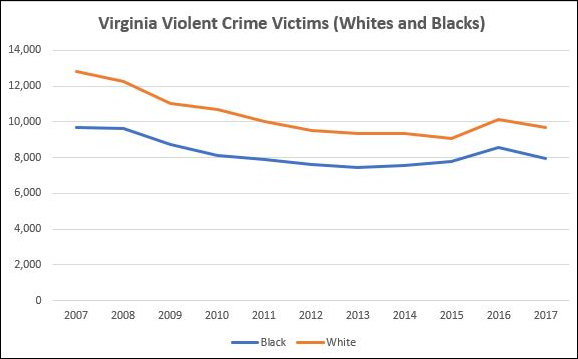 The FBI database doesn’t publish a breakdown for Charlottesville. But it would be surprising if the People’s Republic didn’t show a commensurate decline in the number and percentage of black crime victims.

Now, if you’re really determined to find racists behind every bush, you could point to the fact that the number of white crime victims fell even more over the same than it did for black victims — by 24.3%. Thus, the trend toward fewer crime victims is itself racist because white people benefited somewhat more than black people do! Well, if grievance mongers want to make that argument, they can be my guest!