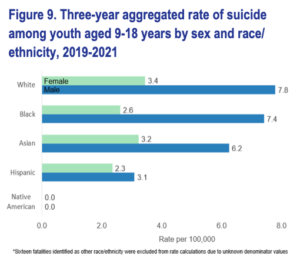 Teen suicide is a major problem in America and Virginia.

The Virginia Department of Health reported in 2021 that suicide is the second leading cause of death among Virginia’s youth.

I have talked around but not about teen suicide in previous articles about transgender adolescents.

A study published by the National Institutes of Heath indicates that 82% of transgender individuals have considered killing themselves and 40% have attempted suicide, with suicidal tendencies highest among transgender youth.

On the other hand, I find it dangerous that the same parental involvement strategies were not adopted in Model Policies for the Treatment of Transgender Students in Virginia’s Public Schools (Model Policies) published in 2021.

The writers of Model Policies had a different agenda and less support from medical professionals than the writers of Suicide Prevention Guidelines. As a result, students certainly will harm themselves and commit suicide at higher rates if schools follow Model Policies than if schools were to adhere to the notification procedures in the Suicide Prevention Guidelines.

The fact that this was not the intention of the writers of Model Policies is not relevant. They were wrong. There is nothing in Virginia law that directed these particular policies.

What the schools see is gender confusion. Gender dysphoria is a clinical diagnosis, not a school determination. So is a diagnosis of suicidal tendencies. Schools don’t have anyone qualified to make those diagnoses.

Child neglect and abuse determinations are the job of Social Services, not the schools.

The same Board of Education somehow endorsed both Suicide Prevention Guidelines and Model Policies. They failed the schools, parents and students with Model Policies.

Some of the findings of the Virginia Department of Health report:

Of particular interest to me is the Suicide Prevention Guidelines section on ASSURING STUDENT SAFETY AND PARENT/GUARDIAN CONTACT.

The parent/guardian should be contacted and interviewed the day the student interview is conducted. Parent/guardian contact should be made regardless of the outcome of the suicide risk assessment.

However, the parent/guardian should not be notified if the student has indicated that the reason for being at risk of suicide relates to parental abuse or neglect.

Instead, the local department of social services should be notified (Code of Virginia § 22.1-272.1).”

That sounds exactly right for both suicide prevention and the transgender stress that often leads to suicides.

Yet from Model Policies:

For many transgender students, their daily emotional and psychosocial wellness are dependent on receiving support and recognition for their gender identity.

School divisions will need to consider the health and safety of the student in situations where students may not want their parents to know about their gender identity, and schools should address this on a case-by-case basis.

If a student is not ready or able to safely share with their family about their gender identity, this should be respected. There are no regulations requiring school staff to notify a parent or guardian of a student’s request to affirm their gender identity, and school staff should work with students to help them share the information with their family when they are ready to do so.

“Safely share” it says. But don’t notify parents or Social Services. “Work with the students.”

Model Policies then jumped from what the authors wanted to happen to what Virginia law requires. No middle step.

To comply with § 63.2-1509 of the Code of Virginia, whenever school personnel suspects or becomes aware that a student is being abused, neglected, or at risk of abuse or neglect (as defined by § 63.2-100 of the Code of Virginia) by their parent due to their transgender identity, they must report those concerns to Child Protective Services immediately.

So Model Policies guides in a way that the schools must thread two needles: Model Policies and the law. There is a wide gap between not notifying parents at the student’s request and suspecting abuse or neglect and calling Child Protective Services (CPS).

How, exactly, is a teacher or other school staffer supposed to bridge that knowledge gap professionally? They can ask the kid, but that adds to the pressure on the child, and how do they evaluate the response?

School psychologists are not licensed for clinical practice. School counselors will have to call CPS if the child says he is being abused.

There is a way to engage more professional help if the child says he does not want his parents told without asking the child if he is being abused.

Call the local Department of Social Services, one of whose many assets is CPS. Let them handle the case and engage CPS if they think it necessary.

What are the sure consequences of Model Policies? Let us assess this situation:

So perhaps someone will be able to explain to grieving parents why the first time the school, which under Model Policies did not contact them about their child’s gender confusion, finally lets them know when the child is dead.

Change the Model Guidelines. Take schools off the hook and make the school choices binary upon discovery of gender confusion by a student.

Those two choices are what Suicide Prevention Guidelines suggests.

Schools must not sit and hope that gender confusion pressures of which they become aware resolve themselves without suicide. Model Policies should not put them in that position.

I expect schools, especially their guidance counselors in whose laps these cases will wind up, to do what they think is best and get it right most of the time.

But ask a trial lawyer.

Virginia schools currently can be sued if they follow Model Policies because they failed to follow Suicide Prevention Guidelines.  Fix it.

This entry was posted in LGBQT, Uncategorized and tagged James Sherlock. Bookmark the permalink.