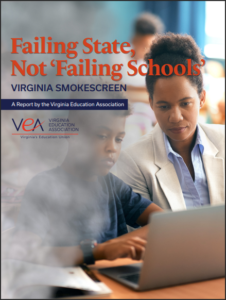 The Youngkin administration threw down the gauntlet last week when it issued the latest public school-accreditation data. Despite unprecedented learning losses during the COVID epidemic, the percentage of Virginia public schools meeting the accreditation standards fell from 92% pre-COVID to 89% post-COVID, a decline of only three percentage points. Commented Superintendent of Public Instruction Jillian Balow: “Frankly, the ratings we are releasing today fail to capture the extent of the crisis facing our schools and students.”

Now the Virginia Education Association has countered with a report, “Failing State, Not ‘Failing Schools.’” The report blames systemic racism and under-funding of non-accredited schools.

“Certain politicians have deprived many of our schools of critical resources, particularly in Black communities, and then point the finger at educators for the challenges these schools face by referring to them as “failing schools,” the VEA says. “This deflects blame and ignores the legacy of state-sanctioned policies in certain Black communities, and perpetuate inequities we see in student outcomes today.”

The report is remarkable in many ways. First and foremost, it makes non-accreditation shortfalls all about race. While the Youngkin administration has emphasized that minorities are hurt the most by school-underperformance, it has never suggested that race is the issue. The VEA flat-out blames racism. Second, the VEA repeatedly contends that non-accredited schools are under-funded. This claim is so lacking in factual support that it approaches outright dishonesty. Finally, the VEA suggests that the answer is more money, always more money. No need for better management, no need for teachers, administrators, parents or students to change the way they do anything. The entire onus for fixing the system belongs to the state and Virginia taxpayers.

I’m not buying it. Not one little bit. 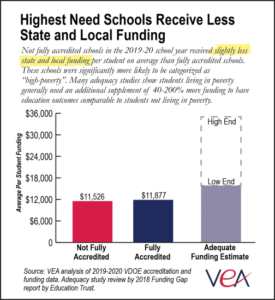 This presentation is fundamentally dishonest. First, it counts only state and local funding, not federal funding, which is heavily skewed to high-poverty schools.

Second, it conflates spending in Northern Virginia (NoVa) and the Rest of Virginia (RoVa). Northern Virginia, which has fewer non-accredited schools, spends much more per student than schools in the rest of the state (in part because the region has higher wage levels and higher costs generally). If you compare apples with apples — per-pupil spending between NoVa schools and per-pupil spending between RoVa schools — state/local spending differences largely disappear.

Third, the VEA neglects to mention the fact that since 2019-20, the General Assembly has allocated massive increases in state spending for public education, with a significant portion steered to high-poverty schools.

So, the implication that non-accredited schools receive less money per pupil is a falsehood.

Funding versus needs. An adjunct to the under-funding argument is that non-accredited schools are under-funded because the “needs” of their student bodies are so much greater.

Students living in poverty are more likely to be food insecure, live in homes with less parental capacity to assist with academic work, experience traumatic events, and miss school due to family responsibilities. Overcoming these barriers in school takes significant resources.

This much is true: the social-welfare needs of the student bodies vary significantly between schools. The unstated assumption, however, is that it should be the responsibility of the schools to address these needs. Federal and state governments spend billions of dollars on social-welfare programs in Virginia. The VEA is implicitly saying that these programs are ineffective or insufficient, but that giving schools — staffed by dues-paying VEA members — more money in what it calls the “community school model” can make a difference.

I don’t buy it. Schools need to focus on their core mission of teaching. If students require wrap-around social-welfare services, then the remedy is not more money for schools but greater coordination with social-welfare agencies.

Debunking Matt Hurt. Fundamental to the VEA critique is that every problem requires more money, and that merely reforming school management cannot fix the problems. To make that argument, the VEA has to contend with the fact that schools in Southwest Virginia — the poorest in the state — have enacted reforms under the Comprehensive Instructional Program (CIP) initiative that have resulted in poor Appalachian kids passing their SOL tests at the highest rate of any region in the state. This poses a fundamental challenge: if poor rural school districts can lift themselves up by the bootstraps, why can’t inner-city schools?

The report cites “a notable series of articles” written by Matt Hurt that examine the relationship between poverty and test outcomes. The VEA contends that comparing poor SW Virginia schools with poor inner-city schools is “oversimplified.”

Incomes might be similar between some lower income Black and white communities in Virginia, but it’s reasonable to assume wealth is very different, and correspondingly impacts student privilege and barriers to education. Furthermore, there are many less visible everyday discriminatory factors that impact Black students in Virginia, including harsher discipline in schools, the highest rate of referrals to law enforcement, and fewer teachers willing to work in majority Black schools.

When we ascribe too much weight to poverty as the main factor to overcome in schools, we can come to the racist conclusion that rural majority white schools in Virginia with similar poverty rates to majority Black schools are simply better at educating their students and have much higher graduation and testing outcomes as a result.

Let that sink in. It’s racist to conclude that SW Virginia schools are better at educating their students than inner-city schools.

Hurt, a frequent contributor to Bacon’s Rebellion, can weigh in on this issue, if he desires. I’ll let him describe the practical, results-oriented management strategies CIP has devised such as setting higher expectations, identifying top-performing teachers, and sharing their best practices, among others.

I’ll settle for making one point. Not long ago, Southwest Virginia schools under-performed state averages in the SOL pass rates. Over the past 10 years, as a direct result of the philosophy implemented by the CIP, SW Virginia has vaulted to the top-performing region in Virginia. That has nothing to do with White privilege, nothing to do with higher incomes, and nothing to do with higher levels of wealth. Over the same period, even as inner-city schools have given themselves over to social-emotional learning, culturally responsive learning, and the rest of the VEA repertoire of ideologically-driven, race-conscious changes, the racial achievement gap has gotten worse.

What the VEA leaves out. In blaming racism, racists, and under-funding, the VEA leaves out so much. Yes, for example, it is true, teachers are more reluctant to teach in high-poverty schools than other schools. As the VEA states, teacher vacancies are twice as high in schools with the “most student need.” Of course, the VEA makes this all about race. “Staffing shortages were significantly more severe in schools with a high share of Black students, students of color, and students experiencing poverty.”

Why does that problem exist? The association can’t very well say that teachers (its dues-paying members) are racist. So, it blames “inadequate funding” that makes it harder for non-accredited schools to recruit and retain teachers.

Guess what else makes it harder to recruit and retain teachers. More frequent disruptions to the classroom. More numerous fights, and increased threats of violence. Deteriorating student disrespect, including defiance and cursing, toward teachers. Indifferent or uncooperative parents. Principals and central-office staff who don’t back up teachers when the chips are down.

One would think that an organization dedicated to upholding the interests of teachers would acknowledge these matters that affect teachers every day. But, no, not the VEA, an organization that has been captured by ideologues who view the world through the lens of racial oppression. The irony is that the VEA, long the enemy of taxpayers, now has become the enemy of learning… and perhaps even teachers.