Richmond-area schools suspend black students at four times the rate of white students, a gap that exceeds the national average, a study by the Virginia Commonwealth University School of Education has found. The findings have been duly reported by the Richmond Times-Dispatch.

One in five black students in the region received an out-of-school suspension during the 2015-16 year compared to 5% of white students. Nationally, the numbers are closer to 15% and 5%, according to a study by the Metropolitan Educational Research Consortium (MERC), a research arm of the VCU educational school that gives special emphasis to “social justice, equity and diversity.”

“This is a long-standing problem with deeply rooted causes, and it’s going to take dedicated leadership and policy to resolve it,” the RTD quoted Genevieve Siegel-Hawley, a VCU education professor and one of the study’s authors, as saying.

To drive home the point, the RTD also quoted Richmond Public Schools Superintendent Jason Kamras: “We have a moral obligation to end racial inequity in school discipline — particularly here in the Richmond region given our history as the former capital of the Confederacy.

The study, “Understanding Racial Inequity in School Discipline Across the Richmond Region,” is typical of much of the academic scholarship purporting to find systemic “bias” in Virginia’s schools. Do the conclusions stand up under close examination? Are Virginia’s teachers and school administrators guilty of widespread prejudice, conscious, unconscious or otherwise? Or do the findings reflect the… shall we say… liberal/progressive biases of the researchers?

What the study says. Across the seven jurisdictions in the Richmond metropolitan area studied, 20% of black students were suspended, compared to 8% of Latino students and 5% of white students. Mattingly does not provide (perhaps because the study did not) the percentage of Asian students suspended. (If higher levels of Asian academic achievement are any indication, they were suspended at a rate even lower than whites.)

The suspension rates increased when students advanced from elementary school and into middle and high schools, with black students more than three times as likely to be suspended in middle school as in elementary school.

Here is the key finding: The black-white gap is even wider for “subjective” offenses such as defiance and disrespect than for “objective” infractions like vandalism. Writes Mattingly:

In summary: Black students are suspended at rates considerably greater than their percentage of the student body, and the “gap” is greatest for “subjective” offenses. That gap is explainable by racial discrimination.

The yawning gap in the study. Unless Mattingly omitted the data, nowhere did the study address the issue of whether black students committed suspension-worthy infractions at a greater rate than Hispanics, whites and (non-persons for the purpose of the study) Asians.

It should surprise no one, even those adopting a liberal/progressive frame of reference, that black students would commit more disciplinary infractions than Hispanics, whites and Asians, and, as a consequence, would incur more disciplinary actions. Rather than reflecting discrimination by teachers and administrators, differential rates of suspension could reflect differential rates of early childhood trauma.

Mattingly’s article provides no indication that such an alternative hypothesis was considered. It appears that the VCU authors leaped to a conclusion of discrimination as the default explanation for the suspension gap.

What do teachers think? There is a body of evidence based upon teacher surveys that is relevant to the question of discrimination. Some of the evidence can be interpreted as supporting the VCU “discrimination” hypothesis; some evidence seems to contradict it.

Here is data from a recent Fordham Institute survey of black and white teachers in schools located in poor neighborhoods (where more than 75% of students were eligible for federally subsidized lunches.) 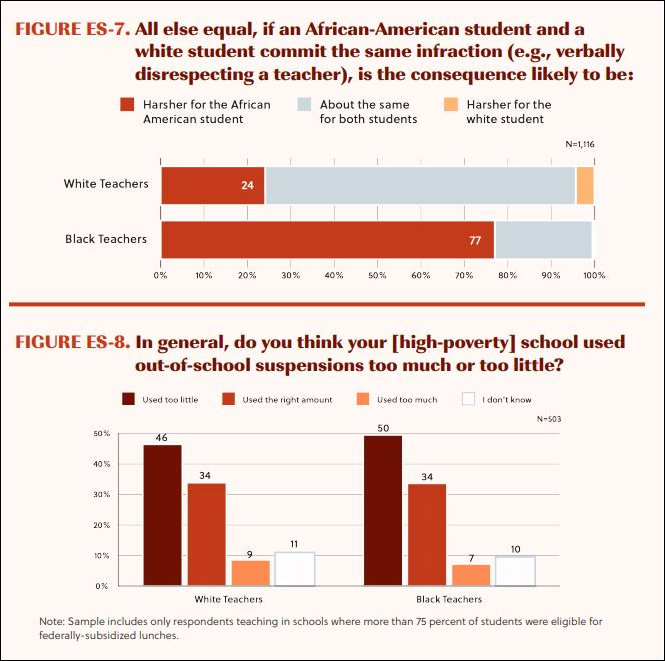 A quarter of white teachers and three-quarter of black teachers perceived that African-American students were, all things being equal, more likely than white students to suffer harsher punishment for an offense such as verbally disrespecting the teacher. This would seem to confirm the idea that at least some black students are treated more harshly on the basis of race.

(For purposes of brevity, I will leave aside the issue the degree to which teacher perceptions have been shaped by social-equity indoctrination by school administrations.) 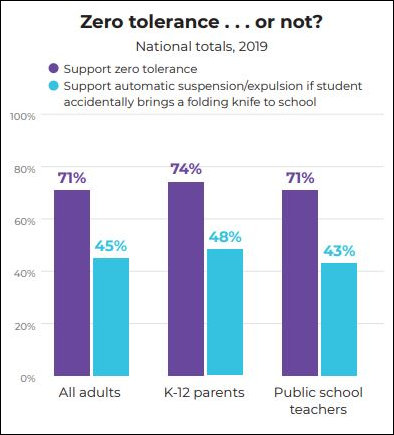 The Fordham survey results are consistent with a just-published PDK poll of teachers and the public. Significant majorities of public school teachers support zero-tolerance policies for certain categories of offenses, such as bringing a folding knife to school. A large majority also sees mediation/ counseling as a preferred alternative to suspensions for other types of offenses, although these were not enumerated. To  say the least, there are complexities to teacher views that cannot be readily reduced to simple survey questions..

Of particular interest, the PDK poll highlighted a quote by “Jean,” a 60-year-old, mixed race high school teacher in suburban Delaware,” who undoubtedly expressed the view of many teachers.

School discipline is too lenient because of political correctness that has now invaded the schools, along with government intrusion into the public schools. The teacher has very little control regarding classroom discipline. It has become a huge problem for the teacher and the students in the room who are being cheated out of academic learning time. The fear factor for lawsuits, the cry for discrimination and political correctness is starting to erode the entire school climate in many buildings. The fear factor is huge and is playing a very large role in what can be done to control unruly students.

In other words, politically correct dogma corrupts the conversation about race in schools.

A corrupt reporting process? In explaining the black-white suspension gap in public schools, the VCU study assumes that the disparate meting out of punishments for “subjective” offenses reflects the underlying prejudices of teachers and administrators. But there are alternative explanations. Perhaps, under pressure from state and district officials to reduce the disparities in black-white punishments, school administrators and teachers are under-reporting offenses by black students. 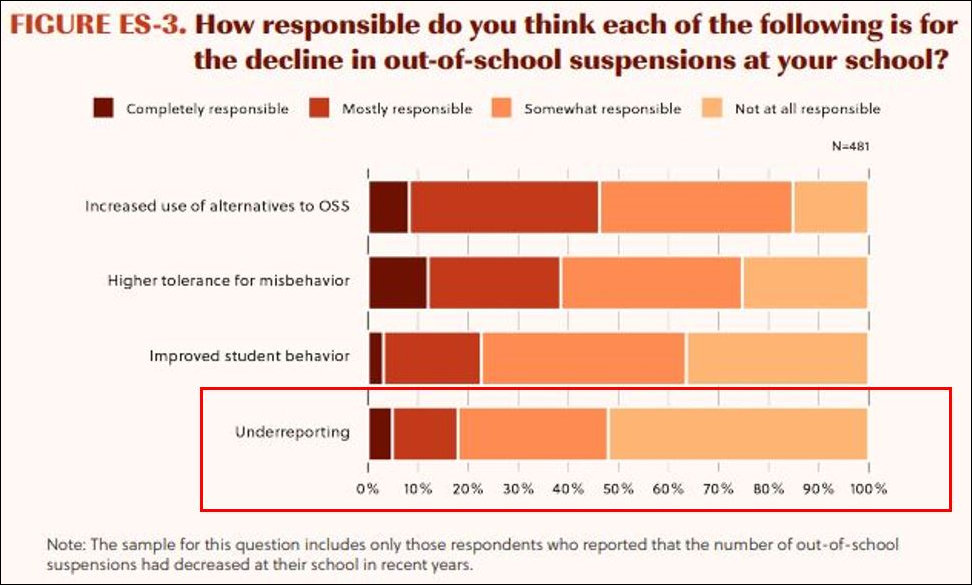 As seen in the Fordham Institute graphic above, nearly half of teachers believe that the supposed decline in out-of-school suspensions can be attributed at least in part to the under-reporting of incidents, while three-quarters cite a higher tolerance for misbehavior. (Teachers also credit alternatives to out-of-school suspensions and improved student behavior.) An alternative view, which the VCU study did not explore, is the possibility that black students are more likely to engage in disrespectful and defiant behavior and that administrators are tolerating and/or underreporting that behavior in order to meet expectations of state and school district officials.

What reason might one cite to claim that black students are more defiant? I heard one possible explanation from a former teacher and middle-school principle, an African-American, over the weekend. He suggested that young black men are taught to “stand up for themselves.” Their upbringing may make them more confrontational with authority figures.

A related hypothesis is that young blacks feel they are the victims of prejudice and racism. They are bombarded with messages from every direction to that effect. The liberal/progressive orthodoxy prevalent in in much of the United States, and increasingly in Virginia, is built upon the supposition of omni-present racism. If some young blacks believe themselves to be victims of racial prejudice in the classroom (whether they are or not in reality), it should surprise no one that they react with greater defiance.

These hypotheses could explain much or all of the supposed racial gap in punishments. They are only hypotheses, however, and they remain as unproven as the discrimination hypothesis. However, no one is even exploring alternative explanations. Given the prevalence of politically correct dogma in academia and media, discrimination is the only explanation you are likely to see.